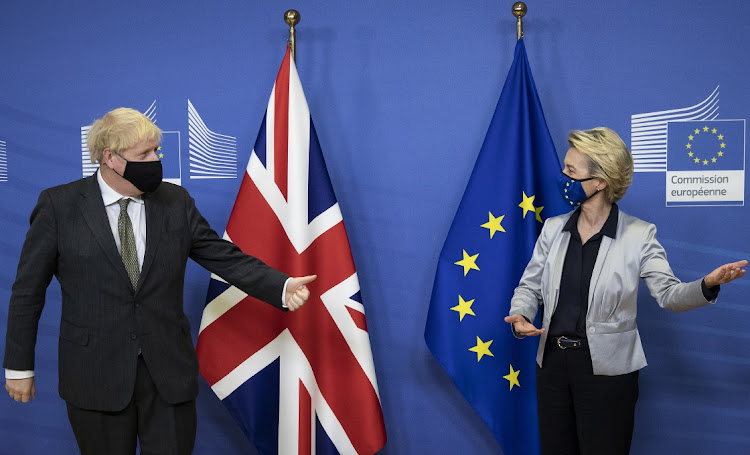 London — Brexit negotiators have until Sunday to come up with a deal after talks over dinner between Prime Minister Boris Johnson and European Commission president Ursula von der Leyen ended without a breakthrough.

The leaders agreed that talks should continue in the next few days despite major differences remaining between the UK and EU over what their future trade relationship should look like. By December 13, a firm decision will need to be taken on the future of the negotiations, the two sides said.

Johnson’s team had hoped that a face-to-face meeting with Von der Leyen would inject new political momentum into the process. But their discussion in Brussels didn’t break the deadlock. The pound fell.

“We understand each other’s positions,” Von der Leyen tweeted after the meeting. “They remain far apart. The teams should immediately reconvene to try to resolve these issues. We will come to a decision by the end of the weekend.”

Eight months of negotiations have so far failed to overcome the three biggest obstacles to a deal: disagreements over fishing rights, the governance of a deal, and fair competition rules for businesses.

If an accord isn’t reached by the end of the year, businesses and consumers will be hit by additional costs and disruption as tariffs and quotas are imposed on trade with the UK’s biggest and closest commercial partner.

While Johnson wants to try every route to get an agreement on a trade deal, it isn’t clear that it will be possible to resolve the significant obstacles that remain, a senior UK official said.

“We’ll leave no stone unturned, we would like a deal if it’s possible, but we’re not going to sacrifice the basic points of democratic principle,” foreign secretary Dominic Raab told Sky News on Thursday. “Come Sunday, they need to take stock and decide on the future of the negotiations. There must come some point of finality on all this.”

Von der Leyen is due to debrief the EU’s 27 leaders about the outcome of the dinner at a two-day summit that starts in Brussels on Thursday.

A person familiar with the EU position said the dinner was constructive and there was a good spirit between the two leaders and their officials. There is clearly a long way to go and the difficulties are real, but both sides seem to think a deal is possible, the person added.

The scale of the gap that still needs to be bridged on the level playing field for businesses was laid bare on Wednesday. German Chancellor Angela Merkel warned that the dispute over what happens if British rules diverge from the EU could wreck a deal.

“If there are conditions from the British side that we will not be able to accept, then we are prepared to go away without an agreement,” Merkel said.

Johnson responded by saying no British leader could accept the terms the EU wanted to impose on business rules and fish.

A spokesperson for Johnson reiterated on Wednesday night that any deal must respect the UK’s independence and sovereignty.