No progress on Brexit deal with just five weeks to go

Both sides are calling on the other to compromise over fishing, state aid and dispute resolution, with many preparing for a no-deal exit 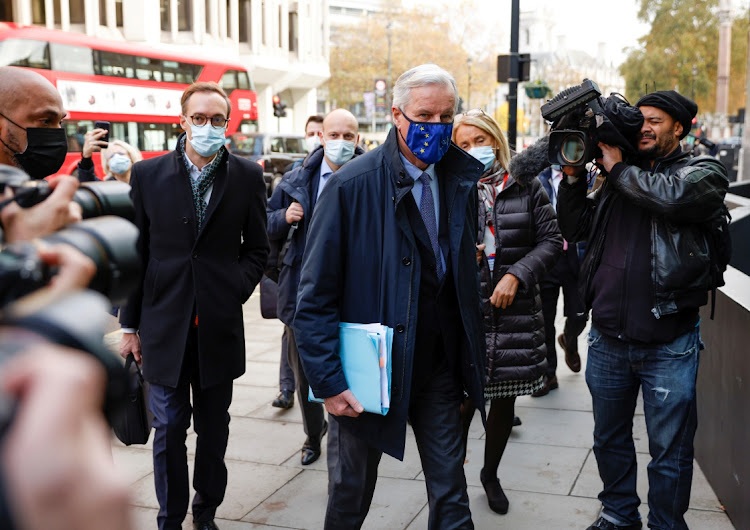 Brussels/London — The EU and Britain said on Friday there are still substantial differences over a Brexit trade deal as the EU chief negotiator prepared to travel to London in a last-ditch attempt to avoid a tumultuous finale to the five-year Brexit crisis.

With just five weeks left until the UK finally exits the EU’s orbit on December 31, both sides are calling on the other to compromise over fishing, state aid and how to resolve any future disputes.

The two sides will shortly resume face-to-face negotiations after they had to be suspended last week when one of EU chief negotiator Michel Barnier’s team tested positive for the coronavirus.

“Clearly there are substantial and important differences still to be bridged but we’re getting on with it,” British Prime Minister Boris Johnson told reporters. “The likelihood of a deal is very much determined by our friends and partners in the EU — there’s a deal there to be done if they want to do it.”

The talks are still snagged on three main issues — fishing, state aid and dispute resolution — but neither side has so far shown a willingness to shift enough on them to allow a breakthrough.

Britain formally left the EU on Januart 31 but has been in a transition period since then under which rules on trade, travel and business remain unchanged. From the end of the year it will be treated by Brussels as a third country.

One EU diplomat said there are “only a few days left” for the talks, which have previously continued through numerous broken deadlines.

“The gaps on level playing-field, governance and fisheries remain large,” the diplomat said following a closed-door briefing given by Barnier to national diplomats on the progress of the negotiations. “Without London taking the necessary decisions quickly, reaching a deal will be all but impossible. Time is running out quickly. There are only a few days left for further negotiations.”

A no-deal exit would snarl borders, spook financial markets and sow chaos through the delicate supply chains that stretch across Europe and beyond — just as the world grapples with the vast economic cost of the Covid-19 outbreak.

EU ambassadors called on the EU Commission to urgently prepare contingency measures for a no-deal. But Barnier was reluctant to go down the contingency route as he still believes a deal can be struck, another EU diplomat said.

A different diplomat told Reuters it was “not a particularly bright picture”.

The first sign of movement — either towards a deal or that talks are crumbling — is likely to be a call between Johnson and commission chief Ursula von der Leyen. No such call has yet been announced.

A source close to the negotiations said it has been “tough” recently to make progress.

The two sides are trying to strike a trade deal on goods that would safeguard nearly $1-trillion in annual trade and the peace in British-ruled Northern Ireland.

The latter is a priority for US president-elect Joe Biden, who has warned Johnson he must uphold the 1998 US-brokered Good Friday Agreement that ended three decades of sectarian conflict.

Von der Leyen said on Wednesday that the EU is ready for the possibility of Britain leaving the bloc without a new trade accord despite “genuine progress” in the tortuous Brexit talks.

THE OBSERVER: Aid cuts are no way to advance ‘global Britain’