Hungary calls the provisions ‘blackmail’ while Poland says are forcing it to accept EU regulations on gay marriage, abortion and press freedoms 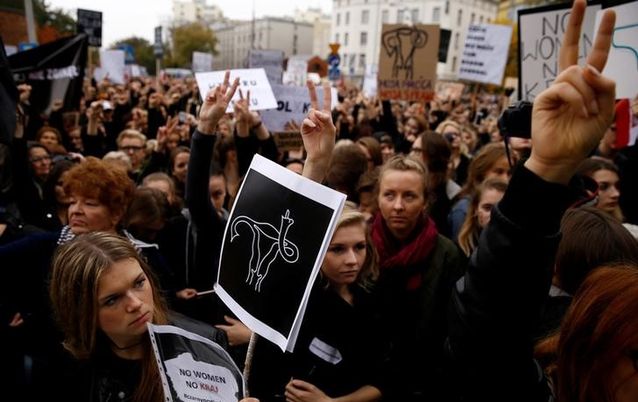 People protest against plans for a total ban on abortion in Warsaw, Poland. Picture: REUTERS/KACPER PEMPEL

Budapest/Warsaw/Brussels — The EU is facing a grueling battle to overcome a threat endangering billions of euros of pandemic-relief and budget funds as European Central Bank president Christine Lagarde warns of the dangers of a delay.

With much of the continent in lockdown amid a second wave of Covid-19 infections, Hungary and Poland are blocking €1.8-trillion of disbursements from the EU’s jointly financed economic recovery package and its next seven-year budget. France says the countries could be excluded from the rescue plan altogether unless a compromise is found.

The sticking point is conditionality linking budget transfers to the rule of law — a subject of frequent sparring between Brussels and the two nations. While relaxing the new requirements would offer one route to bring them on board, it would risk protests from other members such as the Netherlands, who see the standoff as a fight for the EU’s core democratic values. A video conference among leaders on Thursday offers the chance to address the hold-up.

“The next generation EU package must become operational without delay — this is critically important,” Lagarde said at a committee hearing in the European parliament.

An EU official, however, warned that a resolution will take time and is unlikely to be found on Thursday, when leaders are supposed to focus on the pandemic. Poland’s prime minister, moreover, talks about the spat in existential terms.

The rule-of-law stipulation has become a “propaganda” tool against countries that disagree with the bloc’s mainstream and “risks the EU breaking apart”, Mateusz Morawiecki told parliament in Warsaw. “In a few years time, this mechanism can be used against someone else.”

Traders are still betting that a deal gets done, having become well accustomed to last-minute decision making by EU leaders.

The euro is hovering around $1.18, towards the top end of its recent range, while peripheral bonds continue to rally. Italy’s 10-year debt yields are close to a record low at 0.65%, while those on Spanish and Portuguese securities are barely above 0% — a level that would have once been deemed unthinkable during the height of the sovereign debt crisis.

“It is ultimately in the interest of the key stakeholders on both sides to find a solution,” Goldman Sachs economists led by Jari Stehn said in a research note. “Political symbolism still favours resolution by year-end.”

The recovery fund package is a crucial plank of EU efforts to contain an economic crisis that could even overwhelm the ECB’s ability to shield the region’s most vulnerable countries from soaring borrowing costs.

The euro area is already likely to contract this quarter because of the latest virus restrictions. Without further action by governments to keep workers in jobs, support businesses and implement growth-spurring investment, the region will also likely confront a spike in unemployment next year.

The EU agreed in July on its seven-year budget and a stimulus programme funded by joint borrowing. But Hungary and Poland raised objections when the bloc came to nail down the specifics of the rule of law conditions, and the requirement for unanimity on debt issuance allows them to block the entire package.

The two hold-outs — both net recipients of EU financing — are being investigated by the bloc for undermining democratic values by curbing judicial independence and restricting the free press. With punishments so far proving toothless, the rule-of-law provisions would add bite by restricting the financing that’s helped transform their economies since communism fell. They stand to receive at least €180bn in grants, according to Bloomberg calculations.

Poland said this week that the provisions are a first step to forcing it to accept EU regulations on gay marriage, abortion, euthanasia and press freedoms. “It’s a means of political, cultural and ultimately economic colonisation,” justice minister Zbigniew Ziobro said.

German Chancellor Angela Merkel has spoken with EU leaders in recent days, including Orbán and Morawiecki. In a sign there’s unlikely to be a quick fix, she described negotiations as “extremely difficult”.

As the virus is expected to push some countries to brink of default, the new pact lays out rules for rescheduling and reducing debt
World
8 months ago

Despite a resurgent virus, critics say a new law gives the government too much power and endangers citizens’ civil rights
World
8 months ago
Next Article