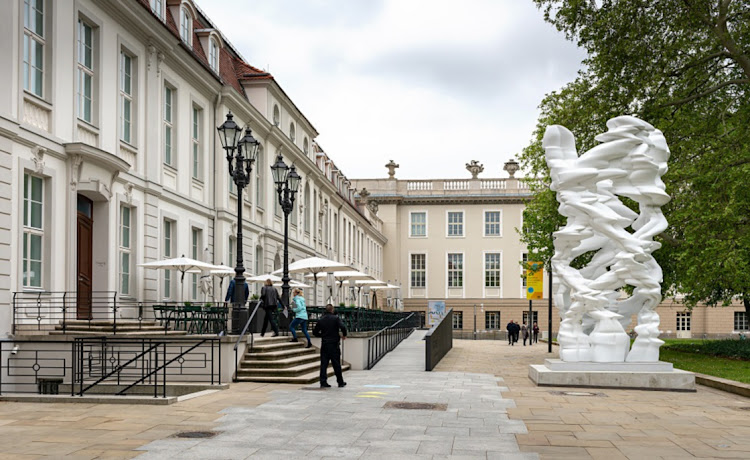 The sculpture Runner by Tony Cragg in front of the entrance to the Palais Populaire on Bebelplatz Unter den Linden in Berlin Picture: 123RF/Karl-Heinz Spremberg

New York — In many respects, Spain’s central bank was playing catch-up the minute it was founded in 1782 — nearly 100 years after the Bank of England.

From another angle, though, Spain’s Banco de San Carlos, which subsequently became the Banco de España, was ahead of its time: it ranks as having one of the world’s first corporate art collections.

“The president of the Bank of Spain commissioned Francisco Goya to create six works of the bank’s directors,” says Banco de España curator Yolanda Romero. “One of the goals was to preserve the memory of the history of the bank through the portraits, and the other was to promote the art of its time.”

Gradually, the Banco de España was joined by a trickle of other financial institutions, which turned into a flood after World War 2. Today, banks are among the most important art patrons in the world.

“Bankers stepped in like the new Medici,” says Arnold Witte, an associate professor in cultural policy at the University of Amsterdam, whose research focuses on corporate art collections. “From the 1950s onward, bankers needed to create a new and positive image for themselves, and I think bankers like [Chase Manhattan’s] David Rockefeller were really aware of the fact that they could use art to that end.”

Now, as pandemic-related shutdowns have entered their ninth month, and as public collections around the world dramatically scale back programming — if not the collections themselves — banks and other large corporations have continued to collect, lend, and exhibit art. By comparison, one in three US museums never reopened after shutting down in March, according to a survey released on Tuesday by the American Alliance of Museums.

Of the 56 members of the International Association of Corporate Collections of Contemporary Art 78% have continued to acquire art during Covid-19, says Loa Haagen Pictet, chair of the Geneva-based organisation.

Only half of the organisation’s members have cut their budgets; all of them, which include the Collection Société Générale, the European Central Bank Art Collection, and the UBS Art Collection, have sustained their arts programming.

“Banks certainly have a role as patrons,” Pictet says. “We’re facing a moment where public collections have very little means to collect and support artists.”

For the first half of the 20th century, banks’ art collections were largely assembled in piecemeal fashion — oil portraits of board members joined decoration for conference rooms and lobbies, accompanied by the occasional painting put up as collateral by insolvent clients.

That changed in 1959 when Rockefeller established Chase Manhattan Bank’s Art at Work collection, setting a new standard for the dedicated acquisition of contemporary art.

“At the same time, you see serious corporate collections being founded in Europe,” says Pictet. “Finance was a very big part of it. [Banks] produce services that aren’t tangible or visible, and so inscribing your history into art is a way of telling your company’s story.”

It’s also, she continues, a means of “showing expertise, by way of managing wealth right up to what you put on the walls”.

In the same way that many of the world’s largest banks are the product of a series of mergers and acquisitions, some of the great corporate art collections are an agglomeration of smaller, earlier efforts.

“Our collection is made up of several different collections,” says Mary Rozell, the head of UBS Group’s 30,000-piece art collection and the author of The Art Collector’s Handbook. “As institutions merged together, the three primary collections were from the Union Bank of Switzerland, the Swiss Bank Corporation, and then Paine Webber.”

The same goes for Bank of America’s collection of 50,000 artworks. “Where our collection is concerned, it came to us from all of these [smaller] banks, and it represents different parts of the country,” says Rena De Sisto, the global executive for arts and culture and women’s programmes at Bank of America. “That art that was collected by Midwest banks tends to be from Midwest artists.” Northeastern banks, including the former Fleet Bank and BankBoston, tended to collect impressionist artists, she continues. “That seemed to be the traditional thing.”

Others are more singular.

In Spain, the Caixa Foundation, a creation of CaixaBank, began in the 1980s soon after the country became a democracy.

“It was a way of helping to open this country to the world,” says Nimfa Bisbe, the chief curator of the “la Caixa” Foundation. “La Caixa was one of the first institutions to bring art from outside Spain into the country.”

Artists including Joseph Beuys, Bruce Nauman, and Donald Judd formed the basis of the collection. “We bought [art market star] Gerhard Richter in the 1980s — not so bad, right?” Bisbe says.

Today, most banks buy art exclusively on the primary market — that is, from galleries or the artists themselves.

“The way we’ve approached collecting has been anchored in living artists,” says Corrie Jackson, the senior curator of the art collection of the Royal Bank of Canada (RBC). Specifically, she continues, the bank collects Canadian artists. “We’re looking at reflecting on, ‘What are the voices of the moment we’re in?’ ”

Similarly, “during my tenure, we have not bought anything on the secondary market and never at auction”, says UBS’s Rozell, referring to works that have been bought once before.

“The mission is to support artists and the gallery system that supports artists,” she says. Most of UBS’s collecting practice “is about the communities where we do business, and we want to support those communities”.

Banks do not publicly disclose their annual acquisition budget, nor do curators divulge how many works they buy every year. That is partially, Rozell says, because “it changes depending on the project we have. We have a flagship office in Singapore that’s going to open later this year, and we commissioned a work by Danh Vo. But if it’s a smaller project, you might be buying more prints, so it pushes the numbers up.”

The only thing she can say definitely is that “we’re consistently active”. In terms of price, Rozell continues, “it’s not very common we’re going over $250,000 [per piece], that’s definitely more the exception”.

Every bank hangs its art collection in its offices. Beyond that, each company’s exhibition practices diverge. Some banks have dedicated exhibition spaces, such as Deutsche Bank’s Palais Populaire in Berlin.

Others, such as Bank of America, take a very different approach — unlike most of its peers, it has not added to its collection in more than 20 years.

“I’m always kind of amused that various of our competitors, if you will, that have large collections are interested in talking about: ‘We have the biggest collection, we have the best collection,’ ” says Bank of America’s De Sisto. “To me the question is what do you do with it, and how do you make it work for the biggest number of people?”

De Sisto’s solution was to create a programme where the bank curated standalone exhibitions, then lent them to smaller arts organisations free of charge. (And in fact, paid for insurance, shipping, and handling.)

The Art in Our Communities programme, which has facilitated more than 130 exhibitions of Bank of America’s art globally, is probably the most extreme example of a bank lending its art to not-for-profit institutions. But almost every bank does it, and increasingly these loans have become a key component of museum exhibitions around the world.

UBS, for instance, has recently lent works to the Royal Academy in London for its show of Lucian Freud self-portraits and the Met Breuer, for its Vija Celmins retrospective; the Banco de España lent Goyas to a show of the artist’s portraits at the National Gallery London in 2015.

“There is that relationship to our community,” says Jackson, of the RBC. “We honour loan requests.”

And that, University of Amsterdam’s Witte says, is key to understanding how banks’ art collections have evolved into bulwarks of the international art world. Corporate collections may have been conceived of as prestige-builders, but they have become something larger than that.

“It’s a means to an end,” he says of corporate collecting, “but still, it has positive effects on artistic appreciation and cultural consumption.”

MARK GEVISSER: Furniture for the apocalypse

Joburgers love a Johannesburg Art Gallery rumour. Jillian Carman knows a thing or two about the cultural institution and weighs in
Life
11 months ago
Next Article

CHRIS THURMAN: Rendering the Other, with not a hint of exoticism

CHRIS THURMAN: Rendering the Other, with not a hint of exoticism