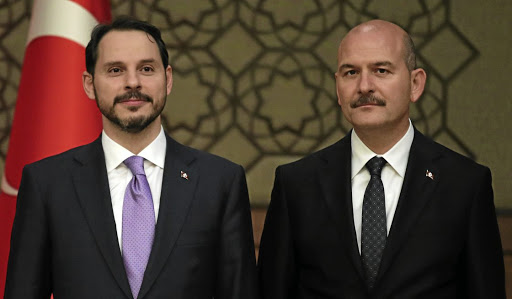 Albayrak cited unspecified health reasons for his decision to step down as finance and Treasury minister, according to a statement posted on his verified Instagram account on Sunday. The announcement came after Erdogan replaced central bank governor Murat Uysal with former finance minister Naci Agbal, a critic of Albayrak’s economic management.

If Erdogan accepts the resignation, that could pave the way for a dramatic shift in economic policy, as well as a political realignment in the ruling party. Albayrak was widely viewed as being groomed to be a potential successor for Erdogan, who’s led Turkey as prime minister or president since 2003.

The lira rallied as much as 6% against the dollar, the most in over two years, indicating investor optimism that the changes might presage a return to economic orthodoxy. Albayrak’s term was characterised by mostly futile efforts to control the value of the currency without resorting to raising interest rates, in line with Erdogan’s widely discredited view that higher interest rates lead to higher inflation. Most economists think the opposite is true.

The ruling AK Party’s spokesperson, Omer Celik, refused to comment on the outgoing minister during a televised press conference on Monday, saying that was up to Erdogan to accept the resignation or make an announcement. But signs are mounting that the president is looking for a successor. He convened a late-night meeting with Agbal and former Deputy Prime Minister Nurettin Canikli to discuss central bank policy, according to people with direct knowledge of the matter.

The meeting took place in Istanbul only hours after Albayrak said he was stepping down, the people said, asking not to be identified because of the sensitivity of the matter. The president and Canikli’s office declined to comment. A spokesperson for Agbal didn’t respond to requests seeking comment.

In his role as deputy premier, Canikli was in charge of parts of Turkey’s economy while the central bank reported to then-Deputy Prime Minister Mehmet Simsek, whose portfolio had a much bigger influence on policies.

Albayrak’s assertive management and family ties to the president had won him gravitas in the ruling party, but also many critics, both in the political system and among investors, who came to see Turkey less as a free-market economy and more as a hybrid, managed economy under his stewardship.

Albayrak previously served as minister of energy for three years until he took over the Treasury and finance portfolios in 2018. He has been married to Erdogan’s older daughter, Esra, since 2004.

The weekend’s first bombshell — the decision to fire the central bank chief — was driven by Erdogan’s frustration with the use of tens of billions of dollar reserves in a failed effort to prop up the lira, according to numerous officials familiar with the matter. That policy was executed by the central bank with strong backing from Albayrak’s ministry, the people said.

After Albayrak took over as economy chief in July 2018, Turkish authorities began aggressively spending reserves at times of volatility in the exchange rate through dollar sales by state lenders. Goldman Sachs economists estimate the interventions exceeded $100bn in 2020.

The pace at which foreign holdings have eroded has left the country more vulnerable to external shocks and failed to stabilise the currency, which weakened to a record low last week. It’s down more than 30% in the past 12 months, the worst performance among major world currencies tracked by Bloomberg.

A spokesperson at the Treasury and finance ministry confirmed the authenticity of Albayrak’s Instagram announcement to Bloomberg, asking not to be named in line with government policy. But the unusual fashion of the resignation caused turmoil itself, surprising even some of Albayrak’s own aides, who said the minister’s phone was off when they tried to reach him.

Albayrak also appeared to have deleted his Twitter account on Sunday. More than five hours after the resignation was posted, Turkish authorities had yet to issue either an official confirmation or denial.

Agbal, the new governor, has often expressed criticism of Albayrak’s policy of intervening in the markets. His appointment could signal higher interest rates are coming, but that depends on the extent to which he negotiates a level of independence in using policy tools.

“We expect the new Turkish central bank governor to take immediate action to tighten monetary policy to stabilise the lira and slowly start to rebuild reserves,” Per Hammarlund, chief emerging-markets strategist at SEB AB in Stockholm, said in a report.

Turkey’s gross reserves dropped 21% this year to $84.4 billion, while net foreign exchange reserves fell by more than half to $18.4 billion. The central bank borrowed tens of billions of dollars during Uysal’s 16-month term through swap agreements with commercial lenders.

Before his sacking, Uysal received numerous warnings about the rapid depletion in foreign reserves, alongside pleas from officials calling for a review of the policies with Albayrak or the president, according to an official familiar with the matter, who asked not to be identified because the discussions weren’t public.

For months, Uysal hesitated to challenge the minister or the president. Eventually, he shared the bank’s growing concerns about the threat posed by interventions with Erdogan, people familiar with the matter said.

Agbal, the new governor, comes from a recently formed fiscal policy body where he reported directly to the president for the last two years, an arrangement that can continue unchanged in his new position as the head of the central bank.

Agbal is working on replacing some of his deputies at the central bank and is especially eager to sweep aside Monetary Policy Committee members that were close to Albayrak, according to people familiar with the matter.

Institutional challenges facing Agbal will remain, making it difficult to predict the policy path ahead, according to a Goldman Sachs report on Saturday.

“Only future monetary policy actions will show if the new appointment once again implies a change in policy and, if so, in which direction,” analysts led by Murat Unur wrote. “This will likely be revealed by the next scheduled” central bank meeting on Nov. 19.