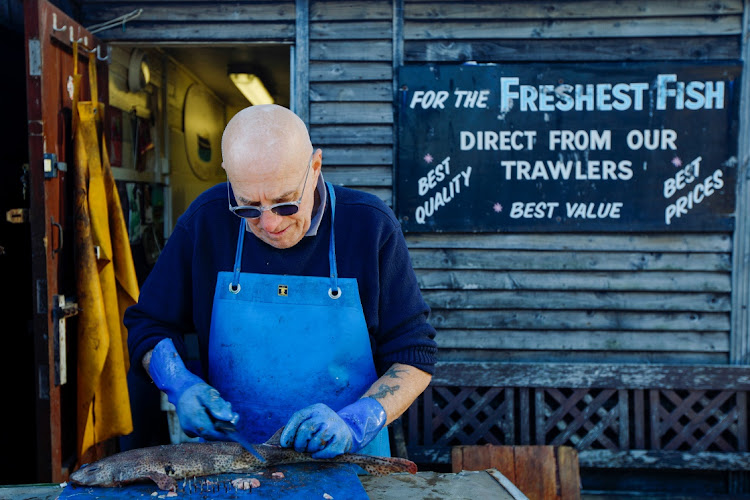 A fishmonger prepares fish on the shore in Hastings, UK. Picture: LUKE MACGREGOR/BLOOMBERG

London — The UK said on Monday that it was open to a “sensible” compromise on fishing and that there was goodwill on both sides to progress towards a Brexit trade deal as a new round of talks began in London.

The UK left the EU in January but the sides are trying to clinch a deal that would govern nearly $1-trillion dollars in annual trade before informal membership — known as the transition period — ends on December 31.

“There are still differences, there are still some obstacles to overcome,” British environment secretary George Eustice told Sky. “But I think there is now some goodwill on both sides to progress things.”

After congratulating Joe Biden on his US presidential election win, Prime Minister Boris Johnson said on Sunday an EU trade deal was “there to be done” and that the broad outlines were clear.

EU chief Brexit negotiator Michel Barnier told Reuters he was “very happy to be back in London (for talks) and work continues.”

The talks have snagged over state aid rules and fisheries, a sector laden with symbolism for Brexit supporters in Britain.

“On fisheries we've always been open to doing a sensible approach, looking potentially at agreements that might span a couple, three years for instance,” Eustice said.

“The issue will become what are the sharing arrangements, how much mutual access do we allow in one another's waters and that's obviously a discussion that will happen annually, but there may also be a partnership agreement that sets out the ground rules as to how we will work on that.”

Fishing alone contributed just 0.03% of British economic output in 2019, but many Brexit supporters see it as a symbol of the regained sovereignty they say leaving the EU should bring. Combined with fish and shellfish processing, the sector makes up 0.1% of Britain’s GDP.

The prospect of securing a longer term deal with the EU on sharing the fish catch is important for getting a compromise.

The upper house of the British parliament, the House of Lords, is due l to debate Johnson's Internal Market Bill later on Monday, which would allow Britain to undercut parts of the 2020 Brexit divorce deal, and has alarmed the EU.

Eustice said the government would reinstate certain clauses if they were removed from the bill by the House of Lords.

From financial services to fishing and footwear, many UK sectors are set to receive a boost
World
5 months ago

The French government has suggested to the fishing industry that compromises be made, according to an MP in Paris
World
5 months ago