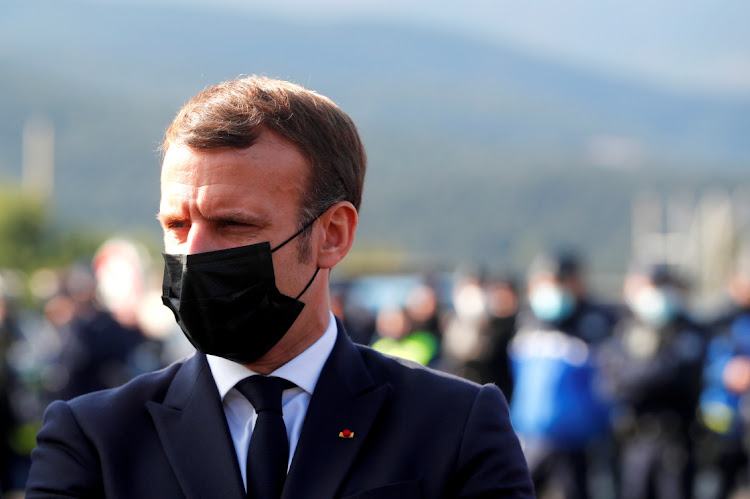 French President Emmanuel Macron speaks to police officers during a visit on the strengthening of border controls at the crossing between Spain and France, at Le Perthus, France, November 5 2020. Picture: GUILLAUME HORCAAJUELO/REUTERS

Paris —  Europe must rethink its open-border Schengen area, including a more robust protection of the zone's external frontiers, President Emmanuel Macron said on Thursday, after a spate of Islamist attacks in France and Austria.

“I am in favour of a deep overhaul of Schengen to rethink its organisation and to strengthen our common border security with a proper border force,” Macron said on a visit to the Franco-Spanish border.

Macron said he would present proposals to European Union partners at a summit in December.

France will rally support before then and hopes Germany will put its name to the plan, a government official said, citing the Netherlands and Austria as other possible allies.

Europe is reeling from two attacks in the past week that involved assailants who moved freely between Schengen member states.

On October 29, a Tunisian man killed three people in a church in Nice. Brahim Aouissaoui had arrived on the Italian island of Lampedusa, which lies off North Africa, five weeks earlier. After being transferred to the mainland, Aouissaoui travelled into France by train hours before launching his attack.

The jihadist who killed four people in Vienna on Monday travelled to neighbouring Slovakia in July in an attempt to buy ammunition, Austrian officials said.

Macron said the recent attacks were a warning to Europe that “the terrorist risk is everywhere”.

Italian foreign minister Luigi Di Maio this week also pressed for Europe to bolster its defences against terrorism and again stressed the need for a revamp of EU immigration laws.

Referring to the attacks, he told the Corriere della Sera daily on Wednesday: “Anyone can enter a member state and cross Europe. The risk is too high, the European vulnerability too large.”

France did not want to restrict freedom of movement, the government official said. Instead, its proposals will be based on Macron's call last year for a more robust EU border force as well as obligations on member states to supply intelligence on people moving across Europe's borders.

The French president also wants the EU to have a single asylum policy to end the rows that have paralysed its policymaking during a years-long migrant crisis.

Nearly 628,000 non-EU citizens were found to be illegally present in the bloc in 2019, up 10% on the previous year, according to Eurostat data.

Macron said France would double the number of police manning its borders.

“We need to bolster our fight against illegal immigration and traffickers who, increasingly often, have links to terrorism,” the president said.

The Schengen zone consists of 22 of the 27 European Union member states, as well as Iceland, Norway, Switzerland and Lichtenstein.

The terrorist-linked murder of three people in Nice’s Notre-Dame Basilica and France’s rocketing Covid-19 infection rates make it a bad week for ...
News & Fox
10 months ago

The French leader tells Arab broadcaster Al Jazeera he understands why people are offended, but it does not justify violence
World
10 months ago
Next Article