The standoff with the women-led protesters has become critical for the ruling Law & Justice party, which has also labelled the gay community an enemy 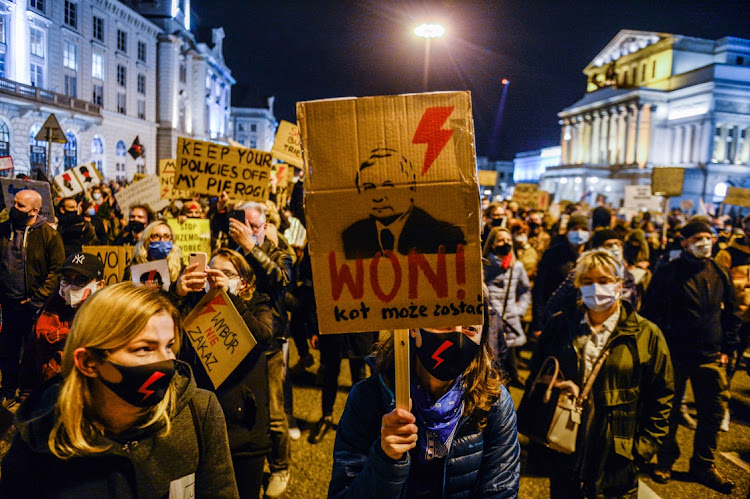 A woman holds a banner as she continues to protest against the Constitutional Court ruling on tightening the abortion law on October 30, 2020 in Warsaw, Poland. Picture: Omar Marques/Getty Images)

Warsaw — Poland’s government is stalling the implementation of a high court ruling that effectively bans abortion amid some of the biggest street protests since the fall of Communism.

Though the political climate is tense, this appears to be a tactical slowdown aimed at avoiding a new flare-up in demonstrations at a time the government is considering more lockdown measures. Verdicts become binding after they’re printed in a government gazette and the cabinet had until November 2 to publish a ruling that further tightens one of Europe’s strictest laws on ending pregnancies.

“There’s discussion about the president’s proposal and it’s good to give yourself some time for dialogue and to work out a new position,” Michal Dworczyk, the head of the prime minister’s chancellery, told broadcaster TVN24 on Tuesday.

The standoff with the women-led protesters has become a critical moment for the ruling Law & Justice party that’s been taking control over all facets of society in the name of ordinary Poles and Catholic traditions. The party has also managed to label the gay community and increasingly the country’s partners in the EU as enemies.

While the government has asked people to stay indoors and banned mass gatherings to slow the spread of the coronavirus, that hasn’t stopped pro-choice women from taking to the streets. Law & Justice party has lost about a quarter of its supporters as the tussle over civil liberties drags on.

The cabinet has in the past delayed publications of rulings it disagreed with, but this time the move appears aimed at avoiding an escalation that could stoke even bigger demonstrations. Last Friday, at least 100,000 people marched through Warsaw and more than 500,000 protested across the country.

“This delay looks like they’re playing for time and waiting for the protesters to tire,” said Olgierd Annusewicz, a political scientist at Warsaw University. “It’s looks like grassroots protests aren’t fading, for now.”

President Andrzej Duda has proposed legislation to soften the effect of the court’s verdict in the hopes of finding a political solution.

But his draft law was rejected by a number of ruling-party backbenchers, most of the opposition as well as the protesters, many of who want a return of the nearly three-decade-long status quo on abortion. The ruling party on Tuesday delayed the next parliamentary sitting, during which the bill may be debated, to mid-November.

Marta Lempart, a lawyer by training, says parallels between the Polish and Belarusian movements are clear: they are being run by Eastern Europeans ...
World
8 months ago

Trying to quell ongoing protests, abortion due to ‘lethal’ foetal abnormalities may be allowed
World
8 months ago

It would be tragic if we developed, made and distributed safe and effective Covid-19 vaccines and people refused to take them
Features
8 months ago
Next Article

Success of EU’s first social bond shows investors are eager to lend to EU as a ...

Success of EU’s first social bond shows investors are eager to lend to EU as a ...