The French leader tells Arab broadcaster Al Jazeera he understands why people are offended, but it does not justify violence 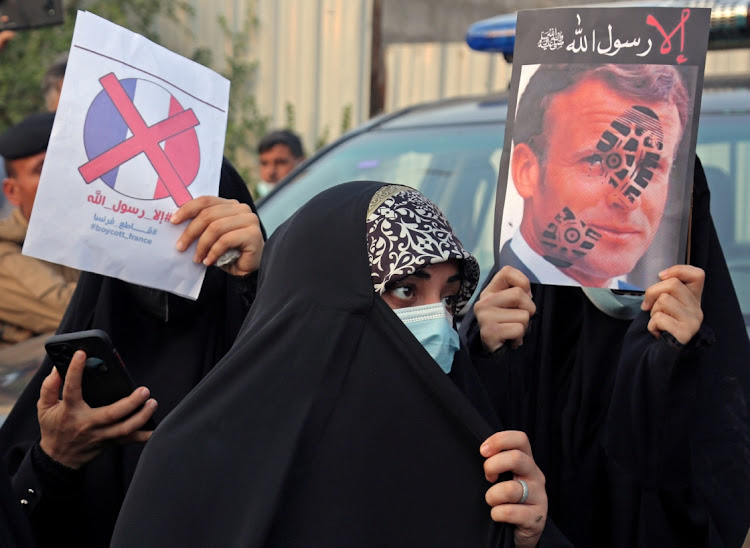 Iraqi people gather during a protest against the publications of a cartoon of Prophet Mohammad in France, outside the French embassy in Baghdad, Iraq, October 26 2020. Picture: REUTERS/TEBA SADIQ

Paris — Two more men were arrested in connection with a knife attack that left three dead at a church in Nice, bringing the number of people in custody to six as investigators look at the suspected assailant's last known contacts, a French police source said.

The latest arrests took place on Saturday, the source said.

An assailant beheaded a woman and killed two other people in a church in Nice on Thursday, in France's second deadly knife attack in two weeks with a suspected Islamist motive.

The suspected attacker, a 21-year-old from Tunisia, was shot by police and is now in critical condition in a hospital.

The Nice attack, on the day Muslims celebrated the Prophet Mohammad's birthday, came amid growing Muslim anger across the world over France's defence of the right to publish cartoons depicting the Prophet.

French President Emmanuel Macron said in an interview with  Arabic television network Al Jazeera broadcast on Saturday he respected Muslims who were shocked by publication of such cartoons but that was no excuse for violence.

In it, he said France would not back down in the face of violence and would defend the right to free expression, including the publication of cartoons. But he stressed that did not mean he or his officials supported the cartoons, which Muslims consider blasphemous, or that France was in any way anti-Muslim.

Macron has deployed thousands of soldiers to protect sites such as places of worship and schools, and ministers have warned that other Islamist militant attacks could take place.

A Greek Orthodox priest was shot and wounded in his church in the southeastern city of Lyon. But officials gave no indication that terrorism was suspected.

On October 16, Samuel Paty, a schoolteacher in a Paris suburb, was beheaded by an 18-year-old Chechen who was apparently incensed by the teacher showing a cartoon of the Prophet Mohammad in class during a civics lesson.

France's chief antiterrorism prosecutor has said the man suspected of carrying out the Nice attack had arrived in Europe on September 20 in Lampedusa, the Italian island off Tunisia.

Investigators in Italy are also stepping up enquiries about the suspected assailant's movements and contacts on the island of Sicily. They believe he may have spent time there after going from Lampedusa to Bari in early October on a ship used to quarantine migrants, judicial sources said.

In Bari, he is believed to have been handed an expulsion order obliging him to leave Italy within a week, the judicial sources said. Investigators are looking into the possibility the suspected attacker stayed in the Sicilian town of Alcamo for 10 days, the sources added.

A man slit the throat of the sexton, beheaded a woman, and badly wounded a third woman, with Nice mayor saying it is ‘time to wipe out Islamo-fascism’
World
11 months ago