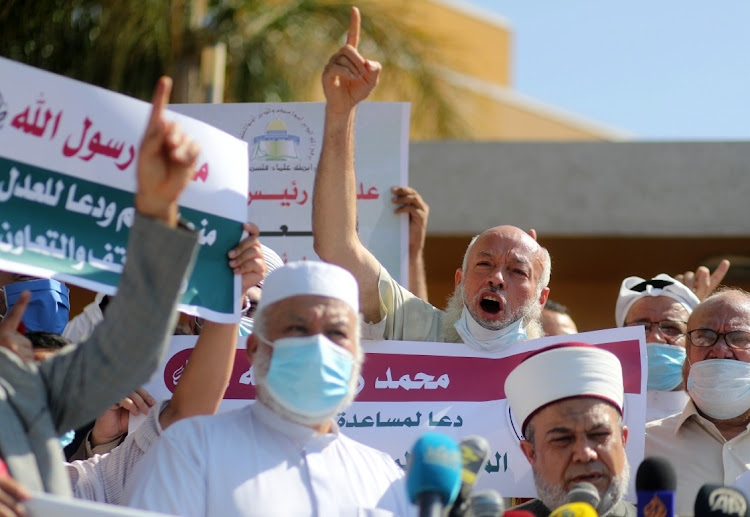 A Palestinian demonstrator shouts slogans during a protest against the publications of a cartoon of Prophet Mohammad in France and French President Emmanuel Macron's comments, outside the French cultural centre in Gaza City, October 26 2020. Picture: REUTERS/MOHAMMED SALEM

Paris/Ankara  — Turkish leader Tayyip Erdogan asked citizens to stop buying French goods on Monday in the latest expression of anger in the Muslim world over images being displayed in France of the Prophet Mohammad, which some Muslims consider blasphemous.

In Bangladesh on Monday, protesters held placards with a caricature of French President Emmanuel Macron and the words: “Macron is the enemy of peace”, while Pakistan's parliament passed a resolution urging the government to recall its envoy from Paris.

Macron had promised France would not “renounce the caricatures”.

Erdogan, who has a history of fraught relations with Macron, said France was pursuing an anti-Islam agenda.

“I am calling to all my citizens from here to never help French brands or buy them,” Erdogan said.

The Turkish president has made similar boycott calls in the past, including an appeal not to buy US electronic goods in 2018 that was not followed through.

Erdogan on Monday joined a chorus of voices calling for a boycott. In Kuwait city, a supermarket had stripped its shelves of L'Oreal cosmetics and skincare products after the co-operative union to which it belongs decided to stop stocking French goods.

In Saudi Arabia, calls for a boycott of French supermarket chain Carrefour were trending on social media, though two stores Reuters visited in the Saudi capital on Monday seemed as busy as normal. A company representative in France said it had yet to feel any impact.

France is a major exporter of grain to North Africa, and French companies in the vehicle and retail sector also have significant exposure to majority-Muslim countries

French trade minister Franck Riester said it was too early to put a figure on the impact of the boycott campaign but so far it was limited and mainly affected French agricultural exports.

The row has its roots in a knife attack outside a French school on October 16 in which an 18-year-old man of Chechen origin beheaded Samuel Paty, a teacher who had shown pupils cartoons of Mohammad in a civics lesson on freedom of speech.

The cartoons first appeared in the satirical magazine Charlie Hebdo, whose Paris office was attacked in 2015 by gunmen who killed 12 people.

Since the beheading, the caricatures have been projected on to a building in one city and people displayed them at protests around the country. Macron said he would redouble efforts to stop conservative Islamic beliefs subverting French values.

Some in the Muslim world saw this as an attack on their religion.

Saudi Arabia’s highest religious authority, the Council of Senior Scholars, said on Sunday that insulting prophets had nothing to do with freedom of expression and only “served extremists who aim to spread hatred”.

Qatar’s government issued a statement on Monday condemning what it described as populist rhetoric inciting the abuse of religions.

Iranian foreign minister Mohammad Javad Zarif tweeted that insulting Muslims is an “opportunistic abuse of freedom of speech. It only fuels extremism.”

“What is the problem of this person called Macron with Muslims and Islam? Macron needs treatment on a mental level,” Erdogan said in a speech on Saturday.

France's government has stood firm in response to Muslim anger. In a Tweet on Sunday, Macron said France respected all differences in a spirit of peace but added: “We will not give in, ever.” His foreign ministry urged foreign governments to dissociate themselves from boycott calls.

Macron on Monday met representatives of France's Muslim community. The meeting was behind closed doors and the Elysee Palace gave no detailed information on what was discussed.

“Our history is one of a battle against tyranny and fanatacisms. We will continue,” Macron tweeted in French, English and Arabic.

“We respect all differences in a spirit of peace. We will never accept hate speech and we defend reasonable debate. We will continue. We hold ourselves always on the side of human dignity and universal values,” he said.

One of those present, Mohamed Moussaoui, President of the French Council for the Muslim Faith, said delegates told Macron they opposed the boycott.

But they also told Macron “the Muslims of France are worried by discussions which seek to confuse them with terrorists”, Moussaoui told French broadcaster BFM.

Several of France's partners in the European Union rallied round the French leader.

“Full solidarity with the President @EmmanuelMacron,” Conte wrote on Twitter. “Personal invective does not help the positive agenda that the EU wants to pursue with Turkey.”