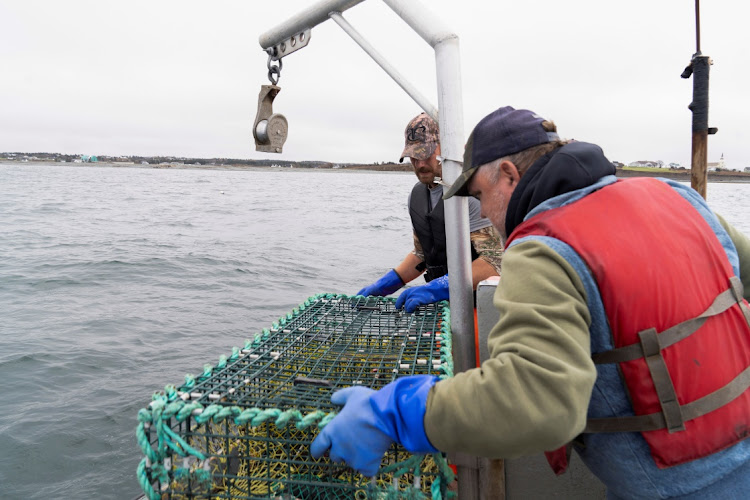 London — Derek Reader coats the deck of his 40-foot fishing boat in salt-resistant paint ahead of another punishing winter hunting plaice, turbot and cod in the Irish Sea. He hopes it will be his last season.

The UK has made regaining control of its fishing grounds a central demand in protracted and fraught talks on a post-Brexit trade deal with the EU. Yet the last trawlerman in the English port of Fleetwood, which once boasted 120 vessels such as his, plans to sell the MFV Albion and quit the industry.

“I voted for Brexit and I hope that we do take back our waters, but it’s too late for Fleetwood,” said Reader, 60. “If a new fishing deal helps me get a better price that’s great, but I can’t make ends meet.”

His grim assessment of an industry in decline for decades contrasts with Prime Minister Boris Johnson’s willingness to risk a no-deal split to defend it. The British government says it is a matter of sovereignty. But the reality is that fishing has long slipped away from communities such as Fleetwood, where processing exports to the continent is a bigger business.

Fishing accounts for just 0.12% of the UK. economy and employs about 24,000 people, only a third of whom go to sea. The bulk of those are in Scotland, distant enough for EU boats to pose less of a threat. What is more, large corporations own the catching rights, with fishermen generally paying to access the waters.

In Fleetwood, a town of 25,000 people a couple of kilometres north of the vacation resort of Blackpool, it is hard to find anyone who says they did not back “Leave” in 2016’s referendum on EU membership. Britain’s entry into the trading bloc in 1973 still raises the hackles of locals, even as they focus on enduring some of the toughest curbs aimed at tackling a surge in coronavirus cases.

Joining the precursor to the EU opened up the country’s fish-rich waters to boats from France and Spain, just as the so-called Cod Wars saw Iceland block access to northern seas with a no-go area stretching 320km from shore.

The rush to exploit Britain’s once teeming seas led to over-fishing and limits on the take for species such as cod, delivering a further blow to ports. About three-fifths of the UK catch is now landed by foreign boats.

Among the seafood merchants gathered before dawn for Fleetwood’s daily fish auction, though, disdain for Brussels is tempered by realism over what might be achievable. There is also concern that the town’s still-healthy processing and distribution business, which relies on Scottish fish sent south nightly by truck, does not find itself cut off from vital EU export markets.

He said deliveries to France represent 20% of sales and have a higher value than supplying English fish-and-chip shops. Any outcome that might provoke a retaliatory block on shipments would damage business.

“I never imagined that things would go this far and that Boris would really hold out,” said Hayton. “I thought we’d be sold down the river long ago. I believe in recovering our fishing rights and doing things differently, but equally exports are hugely important to us.”

Hayton says he aims to spend his life in the industry, though business can be challenging, not least in finding staff in a town where a tradition of successive generations working in fishing has been broken. Midland employs five filleters from Bulgaria, he said.

Ken Hayton, his father and Midland co-owner, offers a blunter assessment of the likely outcome to the current standoff: “The French will behave the way they behave, burn some tyres and throw fish offal everywhere until they get their own way,” the 60-year-old said.

Talks with the EU restarted this week with the aim of reaching a trade accord by the middle of November. The two biggest stumbling blocks remain how to ensure companies have a level competitive playing field, and who gets access to British waters.

The UK government said fishing rights will automatically come back under British control, and negotiators are seeking a separate framework agreement similar to the one Norway has with the EU. “For the first time in over 40 years, we will be free to decide who can access our waters and on what terms,” the department for environment, food & rural affairs said in a statement.

Whatever happens, the restructuring of fishing quotas will be problematic, Ken Hayton said. Should Britain succeed in wrestling back complete control of its waters, the system would need to be dismantled in order for those quotas to be redistributed.

In a submission to the British parliament in 2018, environmental campaign group Greenpeace said an investigation had found that more than a third of the UK fishing quota was controlled by five families, with half of the English quota ultimately held by Dutch, Icelandic and Spanish interests.

Andy Riches, who heads Fleetwood’s fish merchants association, said the government should put more emphasis on ensuring that fish landed at UK ports is sold through local auctions rather than spirited away to the continent without ever benefiting the British economy.

“If we can get control of all fish that go through our ports it will let everyone else have a bite of the apple,” said Riches. “We’re not going to get the boats back, but the industry would be a lot stronger.”

Former Fleetwood trawlerman Tommy Watson, who first went to sea in 1957 aged 15, said the British fleet could be built up again if Johnson holds his nerve in Brexit negotiations and is prepared to invest in the industry.

A Cod Wars veteran who disabled an Icelandic gun boat by snagging the propeller, Watson said that Britain could learn a lesson from its old adversary. Iceland threatened to withdraw from Nato, while cutting the nets from foreign trawlers and firing across their bows, such was the determination to secure fish stocks.

“It’s never too late,” said Watson. “The government will need to incentivise a new generation of fishermen, but it can be done. The bottom line is that the British fleet needs to be catching more of our own fish.”

Back at the quayside, Reader believes his repaint of the Albion should not only see the 65-year-old vessel through the winter but help him sell it once he renews its safety certificate in three months’ time. A trawlerman by trade, he left the industry to work in scaffolding before returning four years ago, something he said was probably a mistake.

“When I first went to sea there’d be 70 boats here,” he said. “You steamed out in a long procession. Now it can be very lonely and sometimes quite frightening when the weather turns and there’s no other ship in sight.”

Fleetwood’s last factory trawler, the 133-foot Jacinta, was broken up this year after previously serving as a museum, while the only vessels moored next to the Albion now are a handful of whelk boats that send their catch to China.

A Brexit agreement that is more generous to British fisherman could help his boat fetch £60,000 because of the trawling licence that comes with it, according to Reader. “That’s my retirement,” he said.

Officials hope Johnson’s intervention will have the same effect as his call with Ursula Von der Leyen in June when he resuscitated the talks by ...
World
11 months ago

The JSE’s listed fishing sector has had a testing year. The effect of the coronavirus pandemic is clear in companies’ results; but not all have been ...
Companies
11 months ago