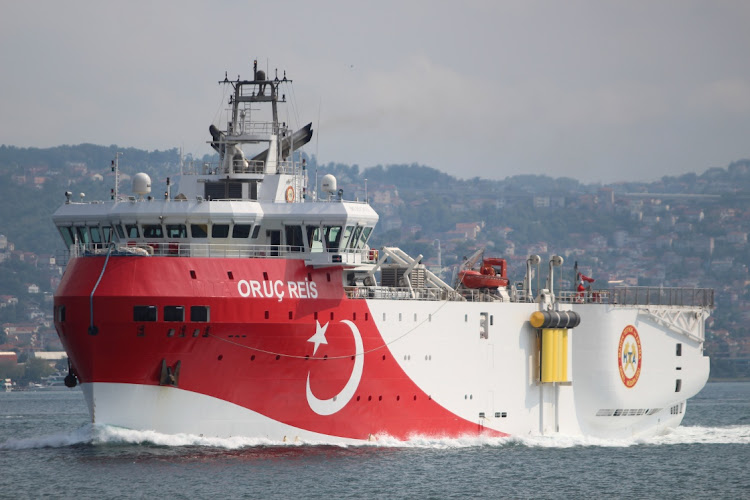 Ankara — A Turkish survey ship returned to the contested waters of the eastern Mediterranean on Monday as deepening frictions with Greece challenge international efforts to defuse the showdown there.

The Oruc Reis will carry out seismic studies in an area between the Greek islands of Kastellorizo and Rhodes until October 22, according to a Turkish navy website. Ankara had recalled the ship in September to allow a chance for dialogue with Greece over territorial disputes, while warning it would return it in the absence of progress.

“We will continue to search, drill and defend our rights,” Turkey’s energy minister Fatih Donmez said in a Twitter post on Monday. Defence minister Hulusi Akar said the navy will protect the ship as needed.

While the two countries agreed last month to resume exploratory talks aimed at resolving territorial disputes in the Aegean and Mediterranean seas, no date has been set. Any headway had already been undermined by an exchange of barbs as recently as Sunday, and lingering tensions over planned naval drills, announced first by Greece and then by Turkey. Turkey’s resumption of seismic surveys in an area of the Mediterranean claimed by both Ankara and Athens inflamed ties further.

The Greek foreign ministry denounced Turkey’s move as “a major escalation and a direct threat to peace and security”, and urged Ankara to immediately revoke its decision. Greek Prime Minister Kyriakos Mitsotakis told European Council president Charles Michel that he will raise the issue at the EU summit next week.

Turkey’s foreign ministry said Greek criticism over the survey is “unacceptable” because the area lies just 15km away from the Turkish shore and 425km from mainland Greece.

Greece says islands must be taken into account in delineating a country’s continental shelf, in line with the UN Law of the Sea, which Turkey has not signed. Ankara argues that a country’s continental shelf should be measured from its mainland, and that the area south of Kastellorizo — just a few kilometres off Turkey’s southern coast — falls within its exclusive zone.

Strains between Turkey and Greece over contested territorial waters worsened over the summer, following similar tensions between Ankara and Cyprus. Turkey and Greece, both Nato members, have since deployed their navies to the area, and in an increasingly militarisation of the showdown, France expanded its naval presence there in response to Turkey’s moves.

The dispute has sparked concerns about a military confrontation and prompted a German-led diplomatic push for a resolution. EU leaders have also threatened to weigh penalties against Turkey by year-end should it fail to take de-escalatory steps.

Athens and Ankara have also been at odds over the future of divided Cyprus. The government of the breakaway state in the Turkish-controlled north, recognised only by Ankara, has reopened a long-closed beach there in an effort to win implicit international recognition of its sovereignty.

Another Turkish survey ship, Barbaros Hayreddin Pasa, is also conducting seismic work off Cyprus until  November 9 as Turkey pushes for a regional conference to discuss a fair share of hydrocarbon resources discovered in the Mediterranean.

As long as anybody in the bloc can block everybody, all will lose
Opinion
11 months ago

The president says the field holds 320-billion cubic metres of natural gas, but sceptics say billions of dollars in infrastructure would be needed to ...
World
1 year ago
Next Article