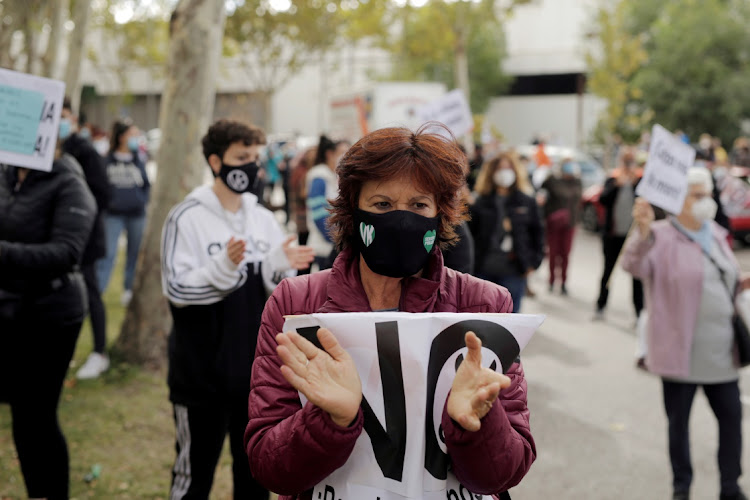 A demonstrator attends a protest against the regional government's measures to control the spread of Covid-19), in Madrid, Spain, October 4 2020. Picture: REUTERS/JAVIER BARBANCHO

Madrid  — A Madrid court on Thursday struck down a government order imposing a partial coronavirus lockdown on the Spanish capital, ruling in favour of the Madrid region in a standoff with national authorities just before a long holiday weekend.

Under the health ministry's order, Madrid regional authorities on Friday barred residents from leaving the area, including nine satellite towns, without a valid reason, and imposed other measures to curb the spread of Covid-19 in one of Europe's worst virus hotspots.

Regional government chief Isabel Diaz Ayuso had opposed the order, saying it would ravage the region's economy, also arguing the ministry had no power to impose such curbs on a region.

The Madrid regional court sided with her in its ruling, calling the restrictions “interference by public authorities in citizens' fundamental rights without the legal mandate to support it”.

The restrictions imposed in Madrid, with its usually bustling restaurants and bars, had not yet been fully enforced as no fines could be levied on people violating the restrictions until the court had issued its decision. The government can appeal.

She promised to release a set of “sensible, fair and balanced” rules on Friday, meaning capital residents may still face more restrictions in a country where the government forecasts GDP will fall 11.2% in 2020.

“Madrid's businesses can't carry on like this. ... Nobody understands the rules, nobody knows what is going on,” she said during a televised address.

Under the law, the Spanish government can limit fundamental rights by imposing a state of emergency, as it did nationwide for three months starting in March, but it is up to the regions, which control health policy, to request such measures on a more local scale outside an emergency.

Prime Minister Pedro Sanchez, who described the situation in Madrid as “concerning”, told reporters in Algeria his government would study the court ruling and decide how to proceed after a meeting with the Madrid authorities.

The region had 741 coronavirus cases per 100,000 people in the two weeks to October 7, according to the World Health Organisation, making it Europe's second densest Covid-19 cluster after Andorra.

The first vaccines will probably get temporary, one-year approvals granted when the benefit of having a product immediately available outweighs the ...
World
11 months ago

The European Commission head, who is a doctor, has tested negative twice after a person she came into contact with on September 29 tested positive on ...
World
11 months ago