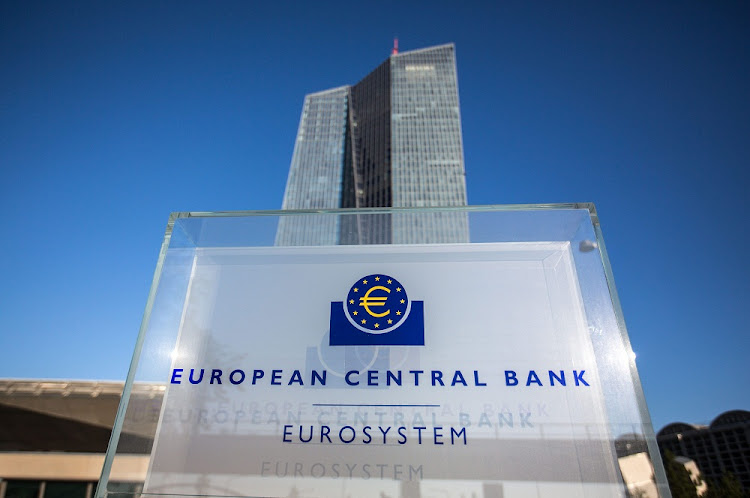 The headquarters of the European Central Bank (ECB) in Frankfurt, Germany. Picture: EPA

It is the latest sign of tension between the need to help economies during the coronavirus pandemic and longer-term ambitions to tackle global warming, after the Bank of England faced similar criticism in August. European leaders have said that they want the region’s recovery from the crisis to be a green one.

“The ECB must immediately exclude corporations whose practices are incompatible with the Paris Agreement from its asset purchases, starting with companies that develop new fossil fuel projects,” Reclaim Finance said, urging the central bank to “stop contributing to climate chaos.”

A spokesperson for the central bank pointed to comments by ECB president Christine Lagarde in December, when she cautioned that assessments of the carbon intensity of entire economic sectors can be misleading. Lagarde also said climate change was an urgent and major challenge.

The criticism comes as governments burnish their green finance credentials, with Germany racking up near-record demand in its debut green bond offering on Wednesday, after a similar move by Sweden earlier in the week.

Market analysts say the ECB may buy more green government debt as issuance picks up, but will face challenges in balancing environmental concerns with the need to remain market neutral.

“Their direct mandate is price stability and they need to do whatever they can under that ambit,” said Rohan Khanna, a rates strategist at UBS Group in London. “The fact that they are talking about it actively now itself is a great start.”

ECB executive board member Isabel Schnabel said in July that the central bank held about 20% of green corporate bonds eligible for its purchase programmes, and was being “environmentally mindful” in its pension fund investments.

Reclaim Finance said the ECB was avoiding climate-change reforms by referring to a “strategy review” that may not have any effect before 2022. Through its quantitative easing programme the ECB supports 11 companies that plan to develop 62 new fossil fuel projects, the group said.

Shell, Total and Engie declined to comment. Shell CEO Ben van Beurden said in July the company would “put disproportionate growth into the transition,” which includes liquid natural gas as well as petrochemicals and power, while Total has also set plans to reduce its carbon intensity.

The ECB has announced an extra €1.35-trillion of bond purchases for the pandemic programme, to be carried out by the end of June 2021. It has also pledged to do more if needed.

The Bank of England faced similar pressure in August to revise its pandemic rescue programme, after research showed it is effectively subsidising polluting industries while saying tackling climate change is a priority.

Switching to green economy a holistic shift across entire society

America’s highest temperature yet recorded, fire tornadoes, no overnight cooling — ‘climate change is catching up to us’
World
8 months ago
Next Article

‘Carbon debt’ to make companies account for past climate damage

‘Carbon debt’ to make companies account for past climate damage