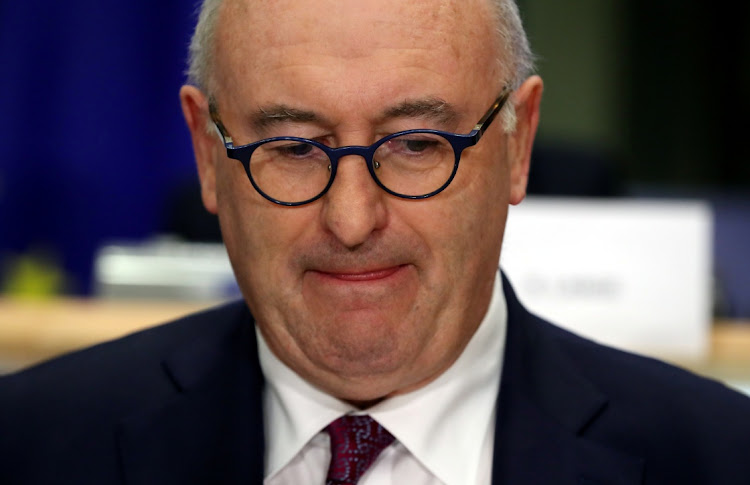 Brussels —  EU trade commissioner Phil Hogan stepped down  on  Wednesday after growing criticism that he broke virus regulations in his  Ireland.

“This evening I have tendered my resignation,” he said in a statement on Wednesday. “It was becoming increasingly clear that the controversy concerning my recent visit to Ireland was becoming a distraction from my work.”

It is  now up to European Commission president Ursula von der Leyen to accept his resignation. Hogan was under growing pressure over his attendance at a golf dinner last week that violated coronavirus regulations, as well as his behaviour during quarantine upon arrival in his home country.

The move came a day after Ireland’s government said that Hogan’s “delayed and hesitant” response impaired public confidence. The commission had no immediate comment.

Hogan’s resignation comes at a sensitive time in trade negotiations. The EU will have to fill a key post that has become even more high profile as a result of US President Donald Trump’s challenge to the global commercial order and a pandemic-induced shock to supply chains.

Hogan spent days trying to put the scandal behind him to no avail as Irish media kept reporting new potential breaches.

He apologised repeatedly for attending the dinner in Ireland during the pandemic, an event under police investigation for being in breach of rules that already led to the resignation of a minister in the country’s national government. The trade chief accepted he should not have gone, but reiterated he had been assured it complied with virus restrictions.

He lost more support after a testy interview with the national broadcaster on Tuesday that was designed to put the matter behind him. Instead it made matters worse when he insisted he had not broken any rules when he left his self-isolation for a “medical intervention” six days after arriving in the country.

The rules stipulate that travellers to the country must self-isolate for 14 days.

“It is clear that breaches of public health guidelines were made by commissioner Hogan since he travelled to Ireland,” Ireland’s Prime Minister Micheal Martin, Leo Varadkar, the deputy prime minister, and Green coalition partner Eamon Ryan said in response to his TV appearance. “People are correctly angered by these actions given the sacrifices so many have made to adhere to public health guidance.”

His departure will create all sorts of headaches for the EU’s executive arm as it gets ready to go back to work.

With Hogan as its point person, the EU has been pushing the Trump administration to scrap controversial tariffs on steel and aluminium, ward off threats of more US duties on European goods including cars and negotiate a settlement to a long-standing transatlantic fight over aircraft subsidies.

The 27-nation bloc is also seeking to prop up the World Trade Organisation after its ability to adjudicate disputes was hobbled by Washington, expand a free-trade push by reaching tariff-cutting deals with Australia and New Zealand and achieve a breakthrough in negotiations to open the Chinese market more to foreign investors.

On August 21, Hogan and his US counterpart Robert Lighthizer announced a limited tariff-cutting accord and signalled the deal could pave the way for a broader improvement in transatlantic trade relations.

That $200m deal, which includes an EU pledge to eliminate tariffs on American lobster, came hours after the European Commission expressed support for Hogan in the controversy over the golf dinner.

There is also the fact that this is a new commission, and losing such a key figure will shake confidence in its executive. It’s also unusual for EU commissioners to step aside. The most striking case was in 1999 when the whole European Commission under Jacques Santer resigned because of a scandal involving a French appointee.

Von der Leyen, a German ally of Chancellor Angela Merkel, may be forced by Hogan’s resignation to shuffle her team of EU commissioners once Ireland proposes a new appointee.

Von der Leyen is responsible for assigning portfolios to commissioners, of whom there is one from every member country. She may prefer to hand the trade role to one of the commissioners now handling other policy matters.

TIM HARFORD: Why ‘don’t be a dickhead’ is all that needs to be said