Air systems draw the air out of meatpacking halls and cool it before pumping it back in, increasing the risk of spreading Covid-19-laden droplets 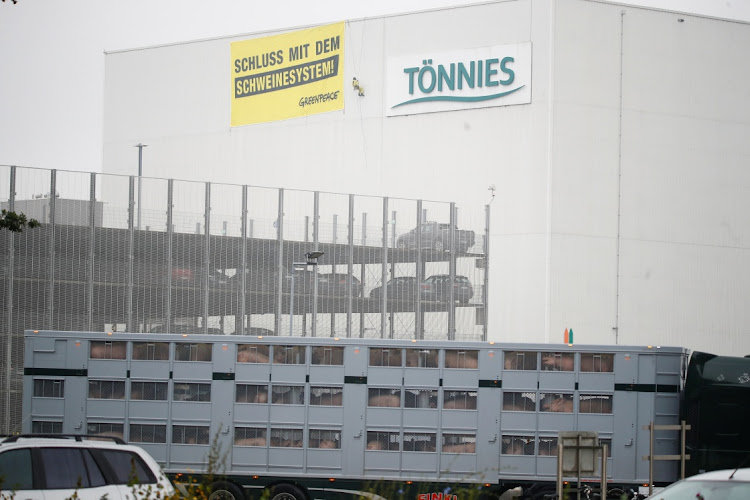 A truck with pigs arrives as a Greenpeace activist unveils a banner after landing on the roof of the Toennies meat factory with a powered paraglider, after Germany's largest slaughterhouse was reopened following a lockdown due to the spread of the coronavirus disease (COVID-19) among its employees, in Rheda-Wiedenbrueck, Germany, July 16, 2020. The banner reads "End the swine system. Picture: REUTERS/WOLFGANG RATTAY

Berlin — A Covid-19 outbreak in Germany is forcing meatpacking plants to review infection risks posed by their cooling systems, placing the industry at the sharp end of growing global concerns over airborne transmission of the coronavirus.

Toennies, a slaughterhouse and meat producer, shut down one of its plants in western Germany in June after more than 1,500 workers were found to be infected with the virus.

It had to install high-efficiency HEPA filters typically used in hospitals and on aeroplanes before being allowed to reopen on Friday.

It now plans to retrofit its other sites. “We anticipate that the authorities will issue this as a requirement for the entire industry,” a spokesperson said.

Low temperatures, which generally allow viruses to survive in the air longer, and crowded working conditions have made meatpacking plants global coronavirus hotspots.

To keep temperatures between 6°C and 10°C, ventilation systems draw the air out of the meatpacking halls and cool it before pumping it back in, increasing the risk of spreading virus-laden droplets.

Last week, the World Health Organisation (WHO) issued new guidelines on the airborne transmission of the virus, with its technical lead on the pandemic saying droplets appeared to be the most common infection route.

The EU's public health body is assessing risks posed by workplace ventilation systems, while Germany's agriculture minister has also asked other industries that operate in low temperatures, such as dairies and fish processing, to carry out assessments.

There are nearly 1,500 meat production plants in Germany, according to the Federal Statistics Office.

The country's meat industry association said other companies were testing out ventilation filters, but not enough was known about their effectiveness in preventing the spread of Covid-19 to recommend upgrades.

The fish industry association said risks were lower than for the meat industry because its plants operated with fewer people and at higher temperatures.

Before it could reopen, Toennies also had to install ultraviolet (UV) irradiation systems in parts of the plant where pig meat is processed.

A UV lamp that kills germs with radiation can cost a few thousand euros while upgrading a meatpacking hall could amount to a five-figure sum, said Christian Rueth, marketing and sales head at UV air disinfection systems maker Heraeus Noblelight.

The company has seen enquiries “more than double” since the Toennies outbreak, in particular from companies in the meat, fish, frozen fruit and vegetable and milk sectors.

Low temperatures can reduce the performance of UV radiation, meaning plants would have to install more powerful lamps, said Christoph Kaup, CEO of ventilation equipment maker Howatherm. His firm has also seen rising enquiries, including from offices and sports halls.

HEPA filters are cheaper but have higher maintenance and repair costs as they tend to clog up quickly with dust, he said.

Martin Exner, a public health expert at the University of Bonn who identified Toennies' ventilation system as a possible virus-spreader, said companies that used air circulation systems to cool the air were in “special focus” and must come up with new hygiene plans.

It remained to be seen if such ventilation systems could pose a problem beyond industry, for example in cinemas or offices.

But if people were crowded together in rooms where the air was being recycled, the topic needed consideration, he said.

Most economists expect another €500bn to be added to the pandemic purchase programme, but some countries need more than others
World
10 months ago

EU executive expects the bloc  to contract by 8.7% this year as some states delay plans to reopen economies
World
11 months ago

More than 1,300 people working at an abattoir test positive for Covid-19
World
11 months ago

Merkel’s administration has vowed to spend whatever it takes to get Germany growing again, including plans to guarantee company liquidity
World
1 year ago
Next Article

UK ban on Huawei a big opportunity for competitors

US warns Nord Stream 2 investors in Europe of sanctions

UK ban on Huawei a big opportunity for competitors

US warns Nord Stream 2 investors in Europe of sanctions