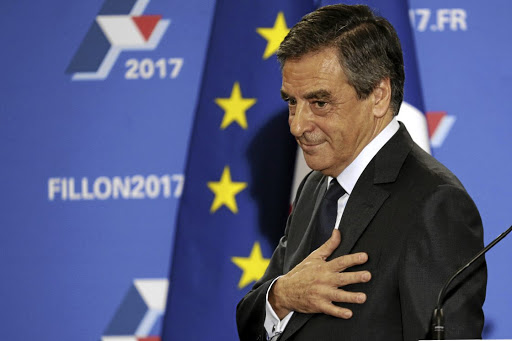 Paris — Former French prime minister Francois Fillon and his wife, Penelope, were found guilty of embezzling more than €1m for a fake job she held as a parliamentary aide lasting about a decade.

Presiding judge Nathalie Gavarino said Penelope Fillon’s role was without substance, in a ruling at a Paris criminal court on Monday. Fillon was given a five-year jail term, of which three are suspended. His wife got a three-year suspended prison sentence.

Francois Fillon “contributed to erosion of the trust that citizens place in those they elect”, Gavarino said. He breached the duties of “probity” and “exemplariness” that are required of a French prime minister and MP, she said.

The Fillon revelations in early 2017 derailed his campaign to become France’s next president. Fillon had been a clear favourite as the governing Socialists’ candidate. A novice Emmanuel Macron lagged behind, while far-right leader Marine Le Pen had a slim chance of winning the runoff.

After his defeat, Fillon quit politics and within months was named senior partner at French money manager Tikehau Capital.

The Fillon couple were also ordered to pay more than €1m in damages to France’s National Assembly. They both appealed Monday’s ruling, putting on hold their sentences.

French investigators have said Penelope Fillon never set foot in the National Assembly despite being paid as a full-time aide, first to her husband when he was in parliament and then his replacement. She had no timetable, no work computer, mobile phone or e-mail address linked to the job in parliament but her salary averaged $140,000 a year for a time.

Former French prime minister and wife in court for embezzling