Because of the Covid-19 pandemic, a scheduled constitutional vote — described by opponents as a power grab — has been postponed 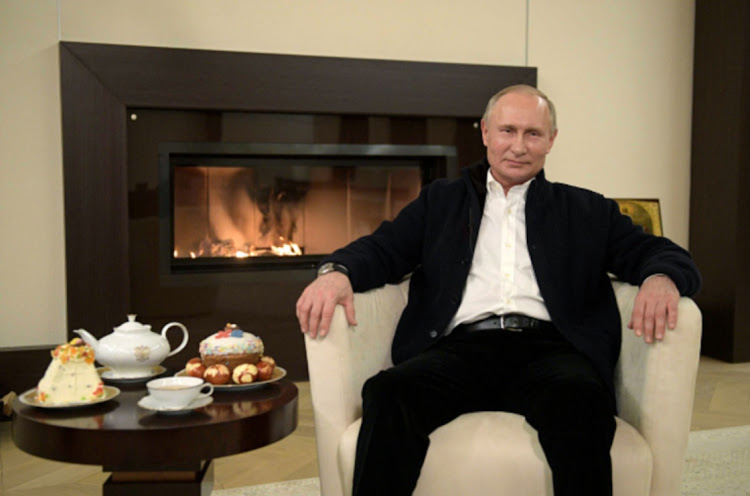 Moscow — It was meant to be the day Russians voted to change the constitution to allow President Vladimir Putin to extend his rule until 2036.

Instead, Putin spent Wednesday troubleshooting one of the biggest crises of his rule — fallout from the coronavirus outbreak.

Because of the pandemic, the constitutional vote — described by opponents as a power grab — has been postponed until an unspecified future date.

So too has a military parade marking the 75th anniversary of victory over Nazi Germany in World War 2, a historic event the former KGB officer has long used to support his narrative of a Russia that, thanks to him, is resurgent.

Putin has survived many crises before, and there is no sign that he is about to be toppled. But problems are piling up for the man who has dominated Russia since 2000.

The price of oil, the Russian economy's lifeblood, is at its lowest level in nearly two decades, and the rouble is now one of the world's worst performing currencies. GDP could fall by 15% if oil prices drop below $10 per barrel, Russia's biggest bank says.

“There won’t be a macroeconomic meltdown but I’m worried about the population losing their livelihoods,” said Sergei Guriev, a senior economist who left Russia in 2013.

Former finance minister Alexei Kudrin says the number of jobless Russians could more than triple to eight-million this year.

And oil and gas revenues could drop by $165bn, said Nordea Russia chief economist Tatiana Evdokimova, which would force the government to dig deep into its international reserves to fund the state budget, already facing a big shortfall.

A nearly 26-trillion-rouble ($338bn) programme, meant to contribute to Putin's legacy, looks less likely than ever to lift living standards and improve infrastructure as much as hoped.

“All these things combined amount to the single biggest challenge for Putin in his 20 years in power,” said Prof Sergei Medvedev, from Moscow's Higher School of Economics.

“The landscape has changed dramatically. Stability has been ruined, Putin has much less legitimacy, and dissent among the (political and business) elite may be brewing. The regime will be in survival mode for the next year, groping for reserves.”

Russia has reported almost 58,000 coronavirus cases, with 513 deaths, and Putin, 67, is working from an official residence outside Moscow where he holds meetings by video conference.

At 63%, his approval rating is at its lowest level since 2013, according to the Levada pollster.

There are also some early signs of social unrest over the situation — an anti-lockdown rally in southern Russia on Monday, a scattering of online protests and growing complaints by small businesses that authorities are not doing enough to help them through the crisis.

The Kremlin called the rally illegal, but said it was important to listen to people's concerns. It has said the government will do more to help businesses if necessary.

Private business owners have been told to suspend business, but to keep paying staff.

Dariya Kaminskaya, who owns a car repair shop where work has dried up, told Reuters she had paid her seven employees out of her own pocket.

“This is how revolutions were started in the past, beginning with the proletariat,” she said.

A senior Russian businessperson, who requested anonymity for fear of repercussions, said he expected a wave of bankruptcies among small businesses.

“It probably won’t be as bad as 1991 (the year the Soviet Union collapsed). But it will be difficult. It could be that violence, big demonstrations won’t happen, but the population will be on the brink,” he said.

Putin's role has come under scrutiny, with critics accusing him of being initially absent from the front line in the battle against the coronavirus.

The Kremlin has dismissed the criticism, saying it was right to let regional leaders deal with things on a local level.

But a decision by Putin to send medical supplies to the US and other countries as a goodwill gesture went down badly with some Russians worried about their own supplies.

Unable to buy face masks or paracetamol in a pharmacy in April, a woman was heard saying by Reuters: “We've probably given it all to the Americans. Why did we do that?”

Putin's fourth presidential term does not expire until 2024. He has state television on his side, the police are well drilled in shutting down demonstrations and the judiciary has shown it is ready to use tough laws on protests to punish demonstrators.

Moscow has more than $550bn salted away in international reserves and the finance ministry says Russia could weather low oil prices for a prolonged period. Putin faces no obvious immediate threat from the opposition, which he has successfully kept down by using the levers of state power, and mass protests in 2011/2012 eventually faded.

But some critics say economic upheaval and discontent over the handling of the coronavirus crisis could boil over.

“Repression and the National Guard won't be able to do much against genuine popular discontent,” opposition politician Vladimir Milov wrote earlier in April, saying a revolutionary situation was developing.

Others do not expect Putin to stumble.

“People may suffer more, there could be riots or unrest, but such things would not immediately bring about changes in the political system,” Medvedev said.

ANDREW DONALDSON: Into the hair-raising world of Vladimir Putin and his secret police

The Russian plan included organising a ‘flash mob’ of the Libyan community in The Hague, featuring the slogan ‘Safe with Saif’
World
1 year ago

JUSTICE MALALA: Be careful what you wish for — we don’t want a Putin as president

Unlike Russian dictator, Cyril Ramaphosa must act according to constitution
Opinion
1 year ago