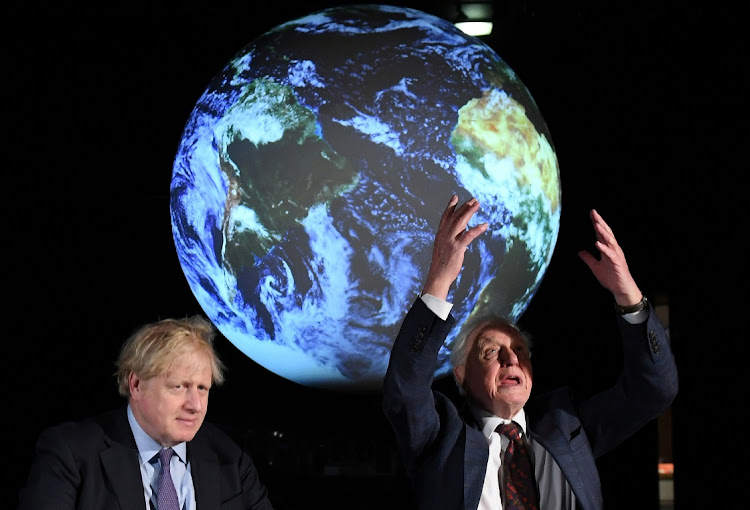 Madrid/London — UK Prime Minister Boris Johnson stood next to legendary wildlife filmmaker David Attenborough on Tuesday at a press conference for the COP26 UN climate conference set for Glasgow in December. He said urgent action is needed to fight global warming and called for an international effort to solve the problem. Then, as he was leaving the stage, a journalist shouted: “What’s your plan?”

Journalists are not the only ones asking. Days after former UK energy minister Claire O’Neill abruptly left her job as president of the conference, she took the prime minister to task in an interview with the BBC.

Johnson “doesn’t get” climate change, O’Neill said, accusing the government of playing politics instead of making sure countries commit to more ambitious greenhouse gas emission cuts ahead of the meeting. “The prime minister has made incredibly warm statements about this over the years,” O’Neill told the BBC. “He’s also admitted to me that he doesn’t really understand it.”

As with many other issues — Johnson famously drafted two newspaper columns on the 2016 Brexit referendum, one coming out for Remain and one coming out for Leave, before finally deciding in favour of the latter — the prime minister has a mixed record when it comes to climate change. While he was vocal about reducing air pollution in London as the city’s mayor from 2008-2016, he also offered up the city to fracking companies in a 2013 letter published in The Times.

In a column for The Telegraph the same year, he linked cold winter weather and snow with “the start of a mini ice age” and cited “experts” who suggested Arctic ice melting was chilling the waters of the North Atlantic, “like a Martini refrigerated by ice cubes”. Other scientists pointed out that the theory “is complete tosh”, he added. “I wish I knew more about what is going on, and why.”

Before becoming prime minister, Johnson voted against a measure to stop climate change and backed a measure to increase taxes on renewable energy, but then criticised US President Donald Trump for backing out of the Paris agreement on climate change. If he has been ambivalent in the past, however, he appeared resolute earlier this week.

UK says it will ban fossil fuel-powered cars from 2035

“The evidence is overwhelming, and this phenomenon of global warming is taking its toll on the most vulnerable populations around the planet,” he said during the press conference at the Science Museum in London. “We must reverse the appalling loss of habitats and species.”

Johnson’s interest in the issue seems to have spiked recently. In the past seven months, he has mentioned climate change in parliamentary sessions more times than during the rest of his time as an MP put together.

His entourage might have played a role. Johnson’s romantic partner, Carrie Symonds, is an environmental activist who left a communications job at the Conservative Party in 2019 to join an NPO dedicated to protecting the world’s oceans. Johnson’s father, Stanley Johnson, is a former head of the prevention of pollution division at the European commission and the author of several books on the environment and environmental policy. Last year, he came out in support of Extinction Rebellion activists after the prime minister called them “uncooperative crusties”.

The prime minister’s stance on climate change is particularly relevant now that the UK has officially left the EU. As host of the UN climate talks, the UK will need to make a major diplomatic effort to ensure global leaders — including climate change sceptics such as Brazil’s Jair Bolsonaro or Australia’s Scott Morrison — commit to further greenhouse gas emissions cuts to prevent the world from warming more than 1.5°C from pre-industrial levels. Last year’s conference, held in Madrid, was widely regarded as a failure.

The UK is “miles off track” on meeting its own climate goals, O’Neill said in the letter to Johnson, published on Tuesday. As of the end of January, a cabinet subcommittee on climate had yet to meet once, UK diplomats had no clear orders on climate change, and there was no plan for ministers to engage with counterparts in other countries.

In response to O’Neill’s interview, Johnson ally and cabinet minister Michael Gove told the BBC’s Radio 5 that the prime minister has long been committed to tackling climate change. “I’ve known the PM for more than 30 years and the first time I met him he told me he was a green Tory,” he said.

Whatever Johnson’s views in the past, Attenborough, at least, is willing to work with him to solve climate change in the future. “We all know the dangers, we all know the potential catastrophe, we’ve had quite enough of talk about that,” Attenborough said at the launch event. “Now is the moment.”

Johnson left the stage without answering journalists’ questions. No replacement for O’Neill has been announced so far.

Davos 2020 to focus on the environment and climate change

When energy costs increase, emissions fall, according to 15 years of data from French firms
World
1 year ago

The Discovery chief posted a blog on LinkedIn titled "Climate change is a behavioural problem; I remain optimistic"
Business
1 year ago
Next Article