The AfD, which entered German parliament in 2017, hopes to beat Chancellor Angela Merkel’s conservatives in an upcoming regional election 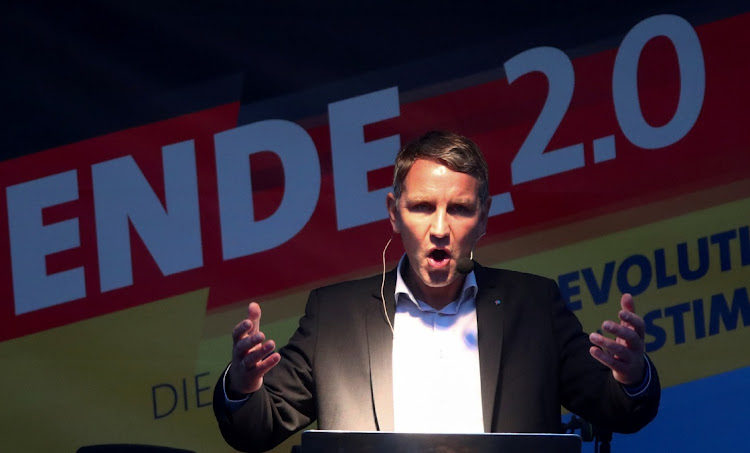 Berlin — The far-right Alternative for Germany (AfD) party will try to build on its successes in two regional votes in September and beat Chancellor Angela Merkel’s conservatives in another eastern state election on Sunday.

Among a swath of nationalist movements making waves across Europe, the AfD is the third largest party in Germany’s legislature behind Merkel’s Christian Democrats (CDU) and the centre-left Social Democrats (SPD).

After surging into the national parliament for the first time in 2017, the AfD is trying to build momentum in the east this year and surged into second place in the eastern states of Saxony and Brandenburg in September 1 elections.

The AfD could fracture the vote in Sunday’s election in Thuringia, causing political gridlock, but its national growth appears to have stalled, with pan-German support only just higher than the 12.6% it won in the 2017 national election.

“The AfD is strong in Thuringia,” said Forsa pollster Manfred Güllner. “However, on a federal level, they are not growing, they are not winning more votes now than they did in 2017 overall.”

The AfD has harnessed voter anger over refugees and the planned closure of coal mines in the poorer and less cosmopolitan, formerly communist east of the country.

Founded in 2013 on an anti-euro platform, the AfD swiftly morphed into a far-right, anti-immigration party. In Thuringia, it has been trying in its campaign to co-opt the spirit of the protests in old communist East Germany that led to the fall of the Berlin Wall 30 years ago.

Adopting the word “wende (change)”, used to describe the fall of East German communism, the AfD calls for “Wende 2.0” — effectively urging voters to do away with the established parties in a “drain the swamp-style” pitch.

Polls show the AfD running neck-and-neck with Merkel’s CDU in Thuringia, just behind the far-left Linke.

Bodo Ramelow became the Linke’s first German state premier in 2014 when he teamed up with the SPD and environmentalist Greens in Thuringia to form a “red-red-green”, or R2G, government.

An INSA poll published on Thursday showed the AfD and CDU tied on 24%, with the Linke on 28%, the SPD on 9%, the Greens 8%, and the business-friendly Free Democrats (FDP) 5% — the threshold parties must surpass to enter the regional assembly.

Coalition building would prove tricky if the election result reflects the polling numbers.

The AfD is led in Thuringia by Björn Höcke, who is militantly anti-immigrant and wants to highlight German over Jewish suffering in Second World War. But his ultra-right stance is tearing at party unity. His drive to pull the party further to the right has alarmed more moderate party members aware that his fiercely anti-immigrant stance will not gain traction with voters in Western Germany.

In July, scores of senior AfD members condemned Höcke’s rising influence, writing in a letter to party leaders: “We say it very clearly: the AfD is not and will not be a Björn Höcke party.”

The fight for the future direction of the AfD is expected to come to a head at a party conference in December.