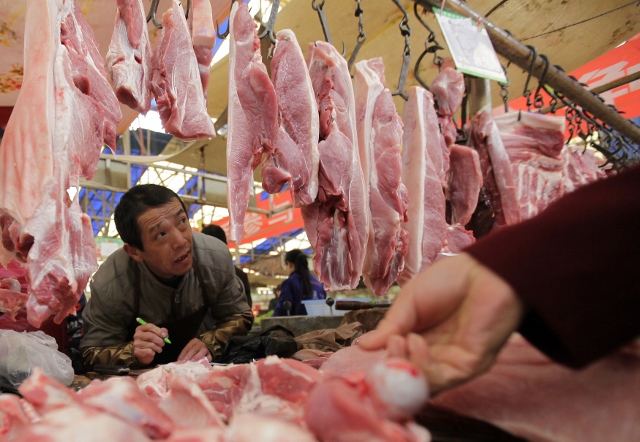 A vendor at a market in Wuhan, China. Picture: REUTERS

The scale of the Covid-19 outbreak in Wuhan early in 2020 may have been nearly 10 times the recorded tally, a study conducted by China’s public health authorities indicates, leaving the city where the coronavirus first took hold still well short of the immunity required to protect it against a potential resurgence.

About 4.4% of those tested were found to have specific antibodies that can fight off the pathogen that causes Covid-19, indicating they were infected sometime in the past, according to a serological survey of more than 34,000 people conducted in April by the Chinese Centre for Disease Control and Prevention (CDC). The data was released late on Monday.

That ratio would suggest that with Wuhan home to about 11-million people, as many as 500,000 residents may have been infected, nearly 10 times more than the 50,000 confirmed Covid-19 cases reported by health authorities in mid-April, when the survey was conducted.

China has been criticised internationally for its initial handling of the outbreak, which has spread around the world in a global pandemic in the year since the first cases emerged. The US has raised questions about China’s accounting of the virus fallout in Wuhan, which was quickly eclipsed by larger outbreaks in Europe and North America. A number of revisions of the case and deaths data added to suspicions that China was massaging the numbers.

While the serological data may reignite those claims, it is common for health authorities to underreport cases during an acute outbreak, since testing capabilities can be limited and hospitals be overwhelmed with a sudden surge in patients. The coronavirus’s ability to quietly infect people without making some of them sick until later or even throughout the infection period only worsens the problem.

Serological surveillance has been widely used by health professionals around the world to gauge the true scale of epidemics, from Covid-19 to HIV/Aids and hepatitis. The prevalence of disease derived from such studies can guide mitigation and vaccination efforts.

The China CDC survey showed a far lesser effect of the virus outside Wuhan, which was effectively shut off as a way of containing the outbreak. The positive rate for antibodies dropped to 0.44% for the broader Hubei province, which was also placed under a three-month lockdown. Only two people tested positive for the antibody among the 12,000 surveyed in six other Chinese cities and provinces, including Beijing, Shanghai and Guangdong, suggesting an extremely low prevalence of the virus across the rest of the country.

The results for Wuhan mean even China’s worst-hit city is still vulnerable to Covid-19. Epidemiologists say at least half a population needs to have come into contact with the virus for even the minimum threshold for herd immunity. But the city’s rate of infection is generally in line with those found in other countries after the first wave of coronavirus infections, the China CDC said in a press release published on its website.

The antibody-positive rates in Spain and Switzerland this northern spring, for example, were as much as 6.2% and 11%, respectively, the China CDC said. While those are higher than the 4.4% found in Wuhan, and come before later waves that have swept across Europe, they still fall short of the herd immunity threshold.

Since quelling the Hubei outbreak, China has largely contained the coronavirus, with sporadic flareups since April snuffed out through aggressive contract tracing and quickly testing millions of people in a matter of days.

As Europe locks down again, and the US has given up, the East’s success is pragmatic, not cultural, and based on recent, not ancient, history
Opinion
6 months ago

‘Trump’s claim that SARS-CoV-2 was leaked from our institute totally contradicts the facts,’ says Shi Zhengli from the Wuhan Institute of Virology
World
9 months ago
Next Article