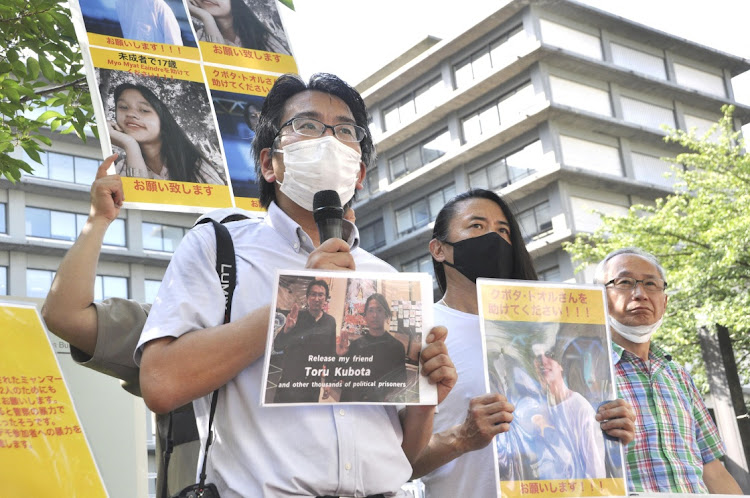 Japanese journalist Yuki Kitazumi, who was detained and freed in Myanmar in 2021, shows off a photo of Japanese documentary filmmaker Toru Kubota who is believed to have been detained in Myanmar after filming a protest that took place on July 30, 2022, outside the Foreign Ministry in Tokyo, Japan on July 31 2022. Picture: KYODO via REUTERS

Myanmar authorities detained a Japanese documentary filmmaker after he attended a protest in the city of Yangon at the weekend against recent executions carried out by the military government, activists said on Monday.

The activists and Myanmar media reports have identified the Japanese man as Toru Kubota.

Reuters could not independently confirm the activists’ accounts and the media reports, and a spokesman for Myanmar’s junta did not answer a telephone call seeking comment.

A Japanese government spokesman in Tokyo said a Japanese man has been detained in Myanmar and the government was calling for his release as soon as possible. Japanese officials declined to identify the man.

Deputy chief cabinet secretary Seiji Kihara told a news conference that the man is in his 20s and was filming a demonstration on Saturday. The Japanese embassy in Myanmar was pressing for his release, he said.

Dozens of people in Tokyo held a rally outside Japan’s foreign ministry on Sunday in support of Kubota and other detainees in Myanmar.

An activist who attended Saturday’s protest said he saw Kubota at the rally at around 3pm in Yangon’s South Dagon district and that Kubota left soon afterwards and headed to a bus station.

“As far as we know, he was the first person arrested. Three others were detained at around 3.30pm at the bus station,” said the activist, who is a leader of the Yangon Democratic Youth Strike organisation.

Since the military seized power in Myanmar in February 2021, nearly 15,000 people have been arrested and 11,820 remain in detention, according to the Assistance Association for political prisoners, an activist group.

The Saturday protest was a rare show of defiance in Myanmar’s biggest city after the ruling military announced on Monday last week it had executed four democracy activists accused of aiding “terror acts”.

In 2021, Japanese journalist Yuki Kitazumi was arrested and charged with spreading false news during a crackdown on media after the military coup. He was later allowed to leave Myanmar and returned to Japan.

Myanmar soldiers shot and killed a Japanese journalist during a pro-democracy demonstration in Yangon in 2007.

According to a personal website featuring his portfolio, Kubota is a Tokyo-based documentary filmmaker with a primary focus on ethnic conflicts, immigrants and refugee issues. It said he has worked with media companies such as Yahoo! News Japan, VICE JAPAN and Al Jazeera English.

Myanmar rights activist Thet Swe Win, who is based in Thailand, said Kubota made a documentary about him and the Japanese filmmaker told him in July he had a visa to return to Myanmar.