Foreign governments have frozen development aid to the Afghan government, unwilling to use their taxpayers’ money to prop up the Taliban 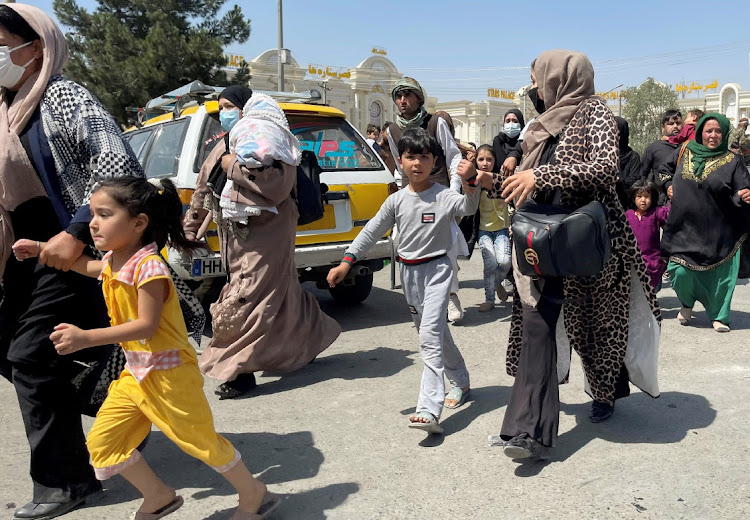 Qafas Kalay, Afghanistan — A group of Afghan children were grazing sheep in fields near the village of Bolak Wandi in eastern Helmand when they spotted a metallic object half-buried in the ground. Crowding round excitedly, they argued over who had found it first and who could sell it for scrap.

Three more children died from their wounds as they were taken to hospital by Taliban fighters who had been nearby. Another died on arrival.

“I don’t blame anyone,” said Haji Abdul Salam, the father of two of the children. He tries to focus on comforting his wife, who cries for her lost children.

“This mortar could have been left over from the Americans or the Soviet Union. However, not only our area, but all of Afghanistan should be cleared of this problem.”

That mission has become more difficult.

The Taliban’s return to power almost a year ago, ending their 20-year insurgency, should have helped demining efforts, with swathes of territory that were off-limits during the fighting finally accessible.

Yet foreign governments have now frozen development aid to the Afghan government, unwilling to use their taxpayers’ money to prop up the Taliban, an Islamist group that restricts women’s rights and has been at war with much of the West since harbouring Osama bin Laden after the 9/11 attacks.

There has been one unintended consequence: in a previously unreported development, the Afghan government agency that oversees mine clearance told Reuters it had lost its roughly $3m funding and laid off about 120 staff in April — the majority of the organisation — because it couldn’t pay salaries.

“All the sanctions have severely affected us,” said Sayed Danish, deputy head of the agency, the Directorate of Mine Action co-ordination (DMAC). “We can’t do strategic work, which is our main responsibility.”

The cost to ordinary Afghans of isolating the Taliban, who say they are being unfairly treated, was also highlighted after an earthquake in June left thousands homeless and the health system under huge strain, sparking some calls for a new approach to the group.

The loss of demining funds could have profound consequences for the country of 40-million people, which is one of the most heavily mined places on Earth after four decades of war.

Almost 80% of civilian casualties from “explosive remnants of war” are children, the UN mining agency estimates, partly due to their curiosity as well as their regular role in collecting scrap metal to sell to bolster families' incomes.

In the seven months to March, about 300 Afghan children were killed or maimed by landmines and other unexploded devices, according to the UN’s children's agency.

The five children from Bolak Wandi, four boys and a girl aged between five and 12, died in April.

Foreign governments have exempted humanitarian aid from their freeze, and hundreds of millions of dollars are flowing into the country, allowing aid organisations to function.

But the limitations of such funds — to meet urgent needs and aimed at bypassing the government — are becoming apparent, with many economists and experts saying the population will suffer without robust state services and a viable banking sector.

DMAC’s funding is part of roughly $9bn a year in international development and security aid that the World Bank says been frozen since the Taliban took power in Afghanistan, which relies on foreign donors for the bulk of its budget.

The demining work itself is largely carried out by aid groups, but DMAC provides strategic guidance to prioritise high-danger areas and maps the nationwide demining work to avoid duplicating efforts, according to Danish and aid workers.

“Mine action works best when national-level co-ordination and oversight is in place,” said Søren Sørensen, head of Humanitarian Disarmament and Peacebuilding for Afghanistan at the Danish Refugee Council (DRC), an international organisation.

“At the moment all that is being done is that we select areas from an outdated list,” he added. “That is not effective and is not addressing the most serious hazards.”

Sørensen stares out of the window of a car on the way back to the capital Kabul from Qafas Kalay, a small village in the eastern district of Khaki Jabbar, an area once used by Soviet forces as a military outpost and which more recently saw heavy fighting as the Taliban took the area.

Hundreds of devices have been detonated in the vicinity but more than 100,000km2 still need to cleared. Across Afghanistan, thousands of unexploded devices lie in wait, the UN demining agency says.

“We finally have this amazing window of opportunity to actually clear this country,” Sørensen said. “There is so much we could do.”

On a hillside outside Qafas Kalay, about 30km east of Kabul, DRC mine-clearance workers in protective vests and visors peer at the ground and sweep detectors.

They place a small flag on a barely visible device found nestled in the dirt — a Soviet anti-personnel mine — and then connect it by wires that run hundreds of metres to a small makeshift control centre where the countdown begins. The device blows up and the deminers return to their painstaking work.

A few kilometres away, children on the doorstep of a mosque pore over cartoons that show different kinds of explosive devices and the kinds of places they might be hidden.

Their tutor tells them what to do if they spot one.

“We don’t go to that place and we report it to our parents,” the children repeat back enthusiastically.

The community nearby is already eking out patches of demined land to farm wheat and fruit and working on irrigation projects, developments that could help alleviate the growing hunger crisis in Afghanistan.

'The people are suffering'

Asked about the cash crunch and layoffs at DMAC, the US department of state said it was continuing to support humanitarian demining in Afghanistan by directly funding nongovernmental (NGO) partners. A spokesperson said it had provided $720m in overall humanitarian assistance to Afghans since August 2021.

Germany's foreign minister said in June there was no room to recognise the Taliban as a legitimate government until it changed policies on issues such as women’s rights.

Foreign capitals want to squeeze the Taliban’s finances to pressure the group to lift restrictions on the rights of girls and women to education, freedom of expression and employment.

Since returning to power, the group has kept girls’ secondary schools closed and demanded women cover their faces in public and only leave home with a male relative or husband.

Some people have also accused the Taliban of reprisal attacks against former members of the Western-backed administration, including soldiers and intelligence officials.

The Taliban has said it would respect human rights and promised to investigate allegations of revenge killings, saying they have put an amnesty against former foes in place.

The Taliban also says it is addressing issues including girls' secondary education and has called on Washington to unfreeze billions of dollars of central bank assets, saying they belong to the Afghan people and the country needs a functioning banking system to alleviate poverty.

Late in June, a temporary deal was reached when DMAC agreed that the UN could set up an office in the country for about six months. But with funding for the stopgap UN regulator half of that of the Afghan agency before the Taliban takeover, it has only employed about 30 from the original 120 staff, according to Paul Heslop, chief of the UN Mine Action Programme in Afghanistan.

He added that for long-term sustainability, the responsibility of co-ordinating demining should be with a state and not an outside humanitarian body like the UN agency.

“We’re in a situation where we have a government that's not recognised,” said Heslop, adding that the lack of funding was “very difficult”.

“Even if you pay people they can’t get the money out of the banks, it's very difficult for the people of Afghanistan at the moment, they are really suffering.”