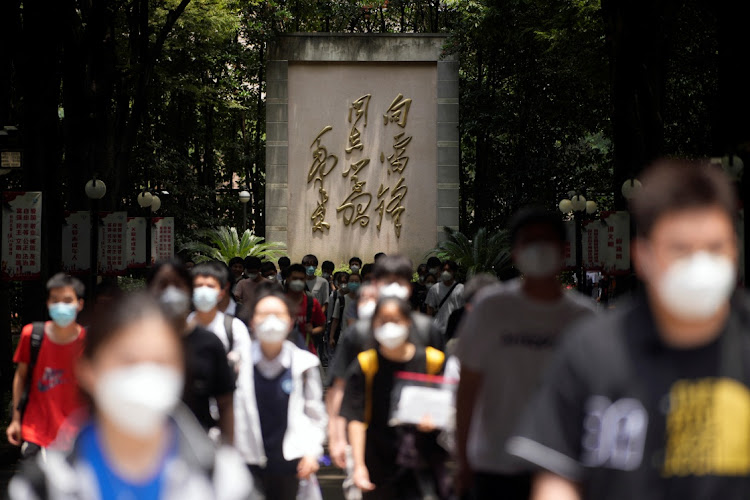 Students wearing face masks walk out of a venue of the annual national "gaokao" university entrance exam, which was postponed in the city due to the coronavirus disease outbreak, in Shanghai, China July 7 2022. Picture: REUTERS/ALY SONG

Shanghai/Beijing — Millions in Shanghai queued up for a third day of mass Covid-19 testing on Thursday as authorities in several Chinese cities scrambled to stamp out new outbreaks that have rekindled worries about growth in the world’s second-largest economy.

Local government officials across China were under pressure to prevent the disease from spreading to such degree that, under the country's “dynamic zero-Covid-19” strategy, would require major restrictions for a prolonged period of time.

Shanghai in particular wanted to prevent a repeat of the two-month lockdown that caused great economic loss and mental stress to its 25-million residents and disrupted global supply chains and international trade in April and May.

“A resurgence of Omicron is not an issue in most other countries, but it remains a predominant issue for the Chinese economy,” Nomura analysts wrote in a note, referring to the highly transmissible Covid-19 variant.

As China is “by far the largest manufacturing centre in the world, any new waves of Omicron are likely to have a non-negligible impact”, they added.

The latest outbreaks in China have weighed on global asset prices this week.

Shanghai, China’s most populous city, is racing to track and isolate infections linked to a building in which a karaoke lounge had reopened illegally and a food-serving venue offered karaoke services without a licence.

Authorities have revoked the licences of the two businesses and fined them, the city government said on Wednesday. Two local officials were under investigation for failing to conduct proper supervision, it said.

Residents in many of Shanghai's 16 districts had to comply with two compulsory tests between Tuesday and Thursday. But people need to take frequent tests on their own anyway if they want to enter shopping malls or use public transport.

Another 50 compounds and venues were locked down on Thursday in the commercial hub, taking the total to 81.

Overall, mainland China reported 338 new local Covid-19 cases for Wednesday, down from 353, with no new deaths, numbers which most countries would now consider insignificant.

Most cases, 167 of them, were in the eastern Anhui province where more than 1-million people in small towns are locked down.

The capital for the first time on Wednesday mandated Covid-19 vaccinations for most people to enter crowded venues such as libraries, cinemas and gyms, starting from July 11.

The town of Xinjiang in the northern Shanxi province, after finding one case arriving from Shanghai, has tested almost its entire 280,000 population, suspended taxis, ride-hailing and bus services, and closed various entertainment venues.

In a different province, Shaanxi, which reported four new cases, the cultural and tourism authority requested travel agencies to cancel any group tours into parts of its capital Xian, famed for its Terracota Army.

The eastern Jiangsu province, which has cancelled a major sporting event scheduled for November, reported 61 infections.

China has said its uncompromising Covid-19 policy, as opposed to a global trend of coexisting with the virus, was saving lives and the “temporary” economic costs were worth bearing.

Officials have pointed to the millions of Covid-19-linked deaths around the world, vs the 5,226 reported in China.

Analysts warn, however, that some costs may become permanent if China's debt burden increases and if curbs lead to investors and talent reconsidering their presence in the country.

China is planning to set up a 500-billion yuan ($75bn) state infrastructure fund to revive the economy, two people with knowledge of the matter have told Reuters.

MI5 and FBI warn of growing threat from China

Investors fear Beijing may one day be as cut off from global markets as Russia after its invasion of Ukraine, a risk many are hesitant to ignore
World
1 month ago
Next Article