Experts call for strategy to live with recurrent floods 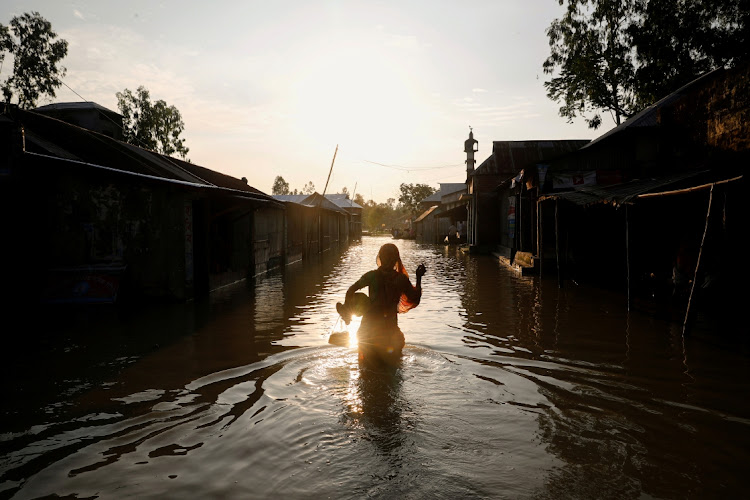 A woman is silhouetted as she walks on a flooded road in Jamalpur, Bangladesh during seasonal flooding, July 18, 2020. Picture: MOHAMMAD PONIR HOSSAIN/REUTERS

Dhaka — One morning in June, Shirin Sultana rose to say her prayers and found her kitchen floor covered in knee-deep water. It was the start of a huge flash flood that inundated vast regions of Bangladesh’s northeast, killing at least 102 people.

“I could not have imagined that the floodwater could rush in and rise a few feet in a matter of minutes,” Sultana told the Thomson Reuters Foundation.

Flash floods are common in this part of Bangladesh, along the Indian border, so residents did not worry much when a series of floods hit the area in April and May, said Masuk ur Rahman, senior manager at Padakhep, an NGO working on rural development.

The flooding usually lasts just a few hours, and locals know to take precautions, such as storing their food and essentials in high places, he explained.

But this time was different. Residents and aid groups said the June floods, caused by record-shattering heavy monsoon rains in India’s upstream Meghalaya state, were the worst in living memory.

According to the Red Cross, more than 7-million Bangladeshis were left in need of aid and shelter.

Hoping to better protect itself from the devastation caused by worsening floods and other climate disasters, Bangladesh’s government is slated to approve its first long-term National Adaptation Plan (NAP) ahead of the COP27 climate change conference in Egypt in November.

The plan, prepared by the country’s ministry of environment, forest & climate change, proposes a series of initiatives and policies until 2050 that aim to make the country less vulnerable to climate change impacts and build its resilience so it is no longer at the mercy of extreme weather.

A draft copy of the $230bn plan, seen by the Thomson Reuters Foundation, notes that rain has become more erratic and extreme in Bangladesh in recent years, which many scientists link to rising global temperatures.

“Warmer air’s capacity to hold moisture at a greater volume can cause more intense and prolonged rainfall,” said Khaled Hasan, a professor of disaster science and climate resilience at the University of Dhaka.

But June’s floods were also made deadlier because of non-climatic factors, such as poorly planned infrastructure development and ineffective warning systems.

For example, construction of all-weather roads in “haor” wetlands regions has covered large areas in impermeable concrete, which hampers the draining of excess rainwater.

“In the past decade, the government has focused on infrastructural development and engaged in various kinds of projects which are portrayed as the markers of development,” said Ali Riaz, a politics professor at Illinois State University.

But “in doing so, both the long-term economic consequences and the environmental impacts are completely ignored”.

At the same time, rapid land erosion due to deforestation and unsustainable land use practices — such as year-round cultivation — is causing more sediment to spill into the country’s water channels, reducing their carrying capacity and making floods more likely, both now and in the future, he said.

The draft NAP suggests infrastructure development should leave room for flood and river drainage, while in some wetland areas an approach of “living with floods” should be adopted.

That means, for example, the government should discourage the building of houses and businesses in flood-risk zones, said Hasan, the disaster expert.

People who have to live in those zones should use water-resistant construction materials, erect rubber dams around their homes or build on stilts to keep their homes above the flood level, he added.

Even in one of the world’s most climate-vulnerable countries, the floods in June caught Bangladesh’s government off guard, said Mohammod Faruk Ahmed, chair of the Gowainghat section of Sunamganj region.

“Usually there are flash floods that stay for two or four hours, but the scale and duration of the flood (in June) was not anticipated,” he said.

The government has faced criticism for being too slow in evacuating residents and finding shelter for displaced families.

The country’s Flood Forecasting and Warning Centre did issue a flash flood warning a few days ahead of time, according to Sardar Uday Raihan, subdivisional engineer at the FFWC.

But, said Ahmmed Zulfiqar Rahaman, a hydrologist and climate change expert from the Center for Environmental and Geographic Information Services, one of the leading contributors to the NAP, “the warning has to reach people in a way that they understand what the impact will be and what they have to do to save themselves”.

The NAP lays out suggestions for a more timely and effective early warning system that engages local communities in the process of spreading information about impending disasters.

“Living with floods would also involve introducing tools like government-subsidised insurance for vulnerable communities so that when a disaster destroys the crops of a farmer, for example, they can still recoup damages,” said Rahaman.

To lessen the damage from more ferocious flooding, Bangladesh needs to look beyond its borders, said Sen, the landscape archaeologist.

Bangladesh and India share 54 rivers, mostly flowing from India to its downstream neighbour.

Mining and development activities along the border of India’s Meghalaya state send silt downriver, clogging up Bangladesh’s canals and rivers so they can’t drain effectively during heavy rainfall, said Rahman, of Padakhep.

The two countries already have some river use deals, including a water-sharing agreement on the Ganges river since 1996, while arrangements for water sharing on the Teesta have long been on the cards.

Bangladesh has also called for joint basin management with India to ensure equitable access to water, as well as managing flood risks.

But the NAP suggests Bangladesh should do more to encourage trans-boundary river management and co-operation with neighbouring countries on measures such as information sharing for forecasting and climate models.

With climate groups warning that major climate disasters such as floods and storms will become a more regular occurrence unless lagging efforts to slash planet-heating carbon emissions are ramped up, Bangladesh needs to see adaptation as a priority, said Sen.

“We just cannot conquer and control rivers, rainfall and floods,” he said. “Rather than controlling and erasing the floods from our lives, we can try to live with them.”