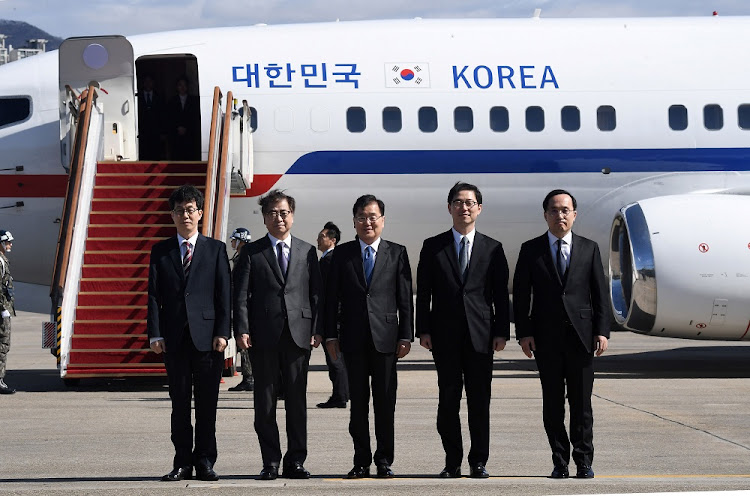 Chung Eui-yong, head of the presidential National Security Office, Suh Hoon, chief of the South's National Intelligence Service, and other members of South Korean delegation pose before boarding an aircraft as they leave for Pyongyang at a military airport in Seongnam, south of Seoul, South Korea, on March 5 2018. Picture: REUTERS/JUNG YEON-JE/POOL

Seoul — South Korea’s main intelligence agency said on Wednesday it had filed criminal complaints against two of its former bosses on charges of abuse of power in cases linked to North Korea during the previous administration.

The National Intelligence Service (NIS) said it filed the complaints with the Supreme Prosecutors’ Office, accusing Suh Hoon and Park Jie-won, who led the agency under the government of Moon Jae-in, of ordering an investigation to end and destroy intelligence documents, respectively.

“I will honourably reveal the truth,” said Park, who accused the new government of politicising the NIS.

The filings come after President Yoon Suk-yeol, who assumed office in May, hinted at the possibility of reviewing the cases. Yoon had said in the run-up to the presidential election in March that his predecessor’s North Korea policy was “submissive”.

The NIS said in a statement that Suh was suspected of forcing officials to close an investigation into the North Korean fishermen and of drafting a false document.

The Moon administration, which was keen to improve ties with North Korea, sent the two North Korean fishermen back to North Korea. It said they were “dangerous criminals” who killed their colleagues while crossing by sea, and that they would cause harm if they were accepted into South Korean society.

The NIS said Park was suspected of destroying intelligence reports on the case involving the South Korean fisheries official, in violation of procedures. The South Korean official went missing at sea in September 2020 while working as a fishing inspector.

North Korean authorities later shot him dead and set his body on fire, an incident that shocked many South Koreans and increased cross-border tension.

Soon after the incident North Korea’s official KCNA news agency accused South Korean opposition lawmakers of stoking controversy over it and blamed South Korea for failing to stop the man from crossing the maritime border.

North Korean soldiers had acted in self-defence as the fisheries official tried to flee, KCNA said.

Kyoto wants tourists to return — just not so many of them

Despite a weak yen being a big draw for tourists and a boon for businesses, Covid-19 fears persist
World
1 month ago