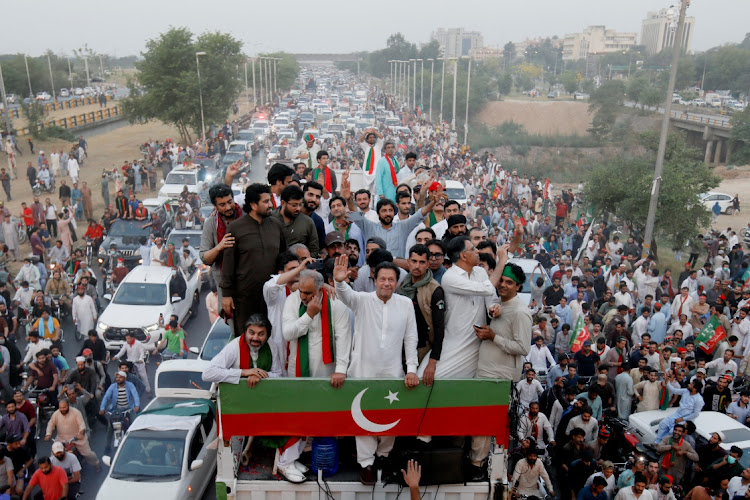 Ousted Pakistani prime minister Imran Khan gestures as he travels on a vehicle to lead a protest march in Islamabad, Pakistan, May 26 2022. Picture: AKHTAR SOOMRO/REUTERS

Islamabad — Pakistan’s ousted prime minister Imran Khan disbanded a protest march by supporters on Thursday after clashes with police outside parliament, but threatened that they would return unless an election was called within six days.

Khan had rallied thousands of supporters to Islamabad, with plans to occupy sensitive parts of the capital until Prime Minister Shehbaz Sharif gave in to his demand for new polls, but Khan told his followers on Thursday morning to step back, while delivering a fresh ultimatum.

“I’m giving you six days. You announce elections in six days,” Khan said from atop a truck after he and thousands of his supporters reached the city.

He said parliament should be dissolved to hold elections in June, and warned the government that he will lead a march on the capital again if it did not meet his demands.

Khan’s attempt to destabilise Sharif’s month-old coalition government risks fuelling tensions during an economic crisis that has forced Pakistan to seek urgent help from the IMF.

The government convened a joint session of parliament on Thursday to discuss the economic crisis after talks with IMF officials in Doha a day earlier.

The IMF said that considerable progress had been made, but emphasised the urgent need for Pakistan to remove fuel and energy subsidies.

Khan has said that the confidence vote that toppled him last month was the result of a US conspiracy, and he is demanding a fresh election to show he has national support.

He had reportedly fallen out with the country’s powerful military before he was removed by a united opposition, that accused him of mismanaging the government, the economy and foreign relations.

Washington and the Pakistan military have denied playing any part in Khan’s downfall.

Pakistan’s two main parties, led by the rival Bhutto and Sharif families, partnered up to oust Khan. These two political dynasties have ruled the South Asian nation of 220-million people several times before, whereas Khan had barely come close to power until he emerged as the winner in the election nearly four years ago.

A charismatic former captain of the national cricket team, Khan has broadened his appeal to both young and socially conservative older Pakistanis by taking a populist stand on nationalist and religious issues.

His call for a march on Islamabad had prompted the government to seal off main roads leading to the capital, but late on Wednesday the supreme court ordered that the barriers be removed, telling the government to designate an open venue for Khan’s supporters to gather.

The protesters did not follow the court orders, however, and hundreds reached the heart of the capital, where they fought running battles with police over several hours before Khan and the main body of the rally entered the city.

Police fired teargas and baton charged the vanguard of the protest march, and detained hundreds of protesters, who had set fire to trees, vehicles, shops and a bus station on the main thoroughfare leading to parliament.

At least 18 police and paramilitary troops were wounded, said information minister Marriyum Aurangzeb, after dozens of the protesters breached the last line of security outside the parliament.

There were also clashes in several cities in Punjab province and the southern port city of Karachi.

IMF to release $900m to Pakistan if fuel subsidies are scrapped