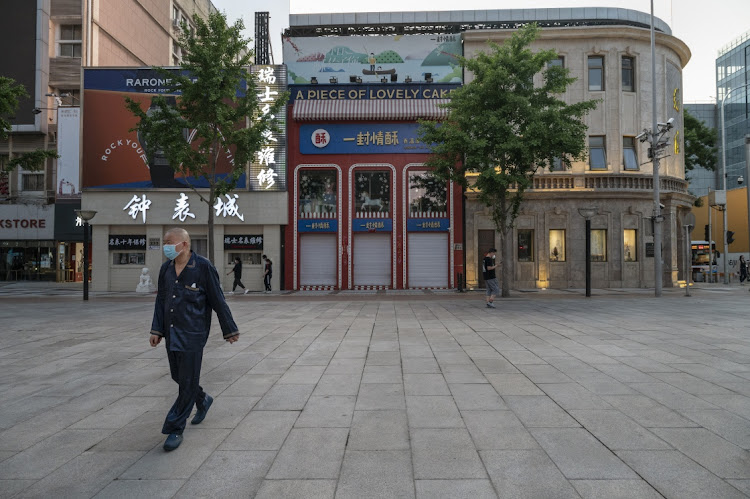 A man walks in his pyjamas on a quiet street in a popular shopping district in Beijing, China, where some stores closed due to recent Covid-19 outbreaks on May 24 2022: Picture: GETTY IMAGES/KEVIN FRAYER

Beijing — China’s Covid-19-hit capital Beijing further tightened its dragnet on the virus with zero community transmission the target, punishing workplaces that flout rules or circumvent curbs and imploring residents to police their own movements.

Since late April, the city of 22-million has wrestled with dozens of new cases a day. While these have been mostly in quarantine areas, a handful have been found in the community at large, illustrating the high transmissibility of the Omicron variant and the challenges that poses to the world’s most stringent of pandemic containment policies.

With Shanghai, China’s business and commercial hub, and numerous other giant cities also shackled by partial lockdowns or other curbs, the zero-Covid approach remains the government’s focus despite the damage it has done to the world's second-biggest economy and global supply chains.

This week, the city has stepped up quarantine efforts and clamped down on workplace attendance, with more districts issuing work-from-home requirements or guidance. That followed an inspection tour on Monday by Vice Premier Sun Chunlan — in charge of China’s Covid-19 response — during which she called for more thorough measures to sever transmission chains.

Some workplaces have ignored Covid-19 prevention policies, state-run Xinhua News agency wrote in a commentary, and failed to check the health profiles of their staff, opening a gap for the spread of the epidemic.

“A big wind can enter even through the smallest of gaps,” according to the commentary published on Wednesday.

The city has stepped up quarantine efforts and clamped down on workplace attendance, with more districts issuing work-from-home requirements or guidance.

In one example of disciplinary action, some employees at the state-run Beijing postal service were either dismissed or given a stern warning after a cluster of cases hit a private logistics company within its jurisdiction, the municipal anti-corruption watchdog said late on Tuesday. The regulator said the firm failed to organise Covid-19 tests for its employees and did not follow strict vaccination rules.

In another instance, a handful of employees in Beijing at a branch of the state railway company concealed their travel histories and have been put under police investigation, the watchdog said in a separate statement.

Meanwhile some operations at a big real estate agency in Beijing have been suspended after one employee violated a district-wide requirement to work from home, the municipality’s housing development authority said on Wednesday.

Throughout the week, Beijing health authorities have been sending out text messages to people's mobile phones urging them to monitor the travel histories of Covid-19 cases and report themselves to local officials if their own movements overlap with those of the infected.

One Beijing resident surnamed Shi, whose residential building recently exited from a lockdown, said she tried to avoid venturing too far from her home, concerned that she might accidentally enter areas with cases, tainting her Covid-19 health credentials recorded by an app on her phone.

“I basically just walk in areas around my residential compounds, go to the supermarket, and dare not travel too far,” she said.

Elsewhere in the country, a series of heavily populated cities were also launching new rounds of mass testing despite caseloads that remain very small by international comparisons.

The northern port city of Tianjin initiated a fresh round of citywide testing on Wednesday after more than a dozen daily new infections emerged this week following two such rounds of testing last weekend. Tianjin requires its 14-million residents to keep their movements largely close to where they live and adhere to a “relatively static” mode during the testing.

The northwestern city of Xian advanced a routine mass-testing campaign previously scheduled on Friday to Wednesday as the city of 13-million raced to reduce transmission risks after five local infections were found over the past 10 days.

Shanghai, which is aiming for a June 1 complete exit from a stringent citywide lockdown, is gradually and cautiously unwinding Covid-19 curbs and allowing more of its population of 25-million to venture out. Still, the vast majority of shops, restaurants and businesses remain shut and a work-from-home regime is still in place.

After nearly two months of lockdown, that highly anticipated exit is expected to reignite the engines of its economy.

Exports from Shanghai, the world's largest container port, dived 44% last month from a year earlier and imports fell by a third, the local statistics bureau said on Tuesday — the steepest declines since at least 2011.

Chinese capital reported 99 new cases were detected on May 22, up from 61 the previous day
World
1 month ago