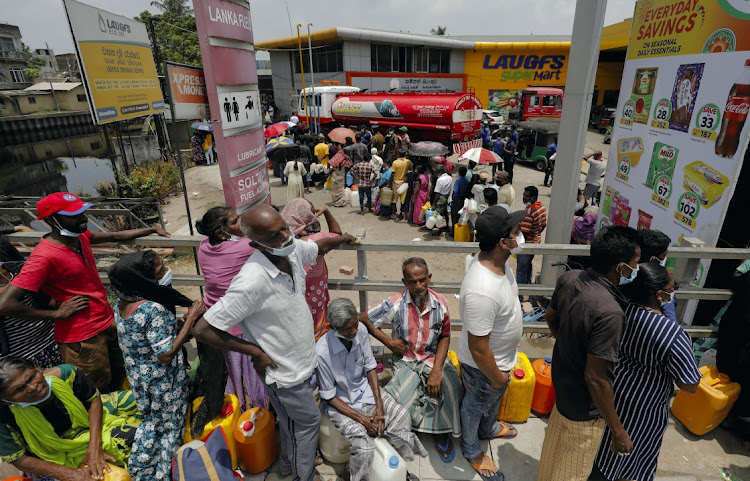 People stand in a long queue to buy kerosene oil for cookers amid a shortage of domestic gas due to the country’s economic crisis, at a fuel station in Colombo, Sri Lanka, on March 21 2022. Picture: REUTERS/DINUKA LIYANAWATTE

Running out of petrol, medicines and foreign reserves, once-booming Sri Lanka is in a mess. And the measures needed to pull its economy out of the unparalleled crisis are likely to bring even more pain.

The dire assessment by new Prime Minister Ranil Wickremesinghe this week of the island nation’s economic plight was a necessary first step, economists said. His proposed solution to bring back some stability includes selling the loss-making national airline, printing more money and possibly raising taxes as well as energy and utility prices.

Wickremesinghe said the “unpleasant and terrifying” facts facing the country included a fiscal deficit that was 13% of GDP, virtually no foreign reserves and shortages of petrol, gas, furnace oil and cancer and antirabies medications.

The country has suspended sovereign debt payments and ratings agencies are expected to place it in default.

In addition, the chronic foreign exchange shortage has led to rampant inflation, bringing thousands of antigovernment protesters onto the streets of the Indian Ocean nation, over which China and India jostle for influence.

In Colombo, the commercial capital, no petrol was to be found at most service stations on Wednesday. Long lines of autorickshaws, the city’s most popular mode of transport, and other vehicles were parked in front, waiting for supplies.

“Any petrol station you go, there is no fuel, and people [are] lined up for kilometres and kilometres,” said Mohammad, a delivery driver who only gave one name. “So, how can you run a vehicle, right? How can you do your daily... activities?”

Sri Lanka has no dollars to pay for petrol shipments, power and energy minister Kanchana Wijesekera told parliament, appealing to people to stop queuing for the next two days.

Economists said most of the prime minister’s proposals make sense. However, the decision to print money is concerning and will raise fiscal and external imbalances, said Patrick Curran, senior economist at London-based Tellimer.

“The policies announced are a necessary first step to resolve Sri Lanka’s economic crisis, but will entail significant short-term pain via higher inflation and currency depreciation and will necessitate further rate hikes from the CBSL [Central Bank of Sri Lanka] to contain the pressure,” he said.

Sri Lanka’s economic crisis, unparalleled since its independence in 1948, has come from the confluence of the Covid-19 pandemic battering the tourism-reliant economy, rising oil prices and populist tax cuts by the government of President Gotabaya Rajapaksa and his brother, Mahinda, who resigned as prime minister last week.

Other factors have included heavily subsidised domestic prices of fuel and a decision to ban the import of chemical fertilisers, which devastated the agriculture sector.

Sri Lanka was a model for emerging market economies and grew at an average rate of 6.2% between 2010 and 2016, according to World Bank figures. In the next three years, the figure had dropped to 3.1%.

The World Bank has forecast the economy will grow 2.4% this year from 3.5% in 2021, but it has said the outlook is highly uncertain.

These and other reforms will form the starting point for discussions with the IMF for a crucial bailout, other economists have said.

“We will also have to see huge tax hikes, probably a doubling of VAT from 8% to at least back to the 15% we saw in 2019,” Robertson said. “It was the cut in those VAT rates that contributed to this crisis.”

The sale of Sri Lankan Airlines is unlikely to fetch much money in the current environment, the experts said. “Not a bad thing to sell it but that is a drop in the bucket vs their USD financing needs,” said Nathalie Marshik, head of emerging market sovereign research at Stifel Financial Corp.

The worry is that fuel and utility price increases will add to public anger against the government while the administration is in deep disarray. The new prime minister has to convince the people that the measures are necessary to restore stability, economists said.

“Overall, it seems that corporates and individuals are preparing for more tax measures,” said Trisha Peries, head of research at CAL Securities in Colombo. “Further, expectations are being set for electricity tariff hikes to come as well.

“In a sense he was preparing the minds of the public for the economic pain that is to come,” Peries said of Wickremesinghe.