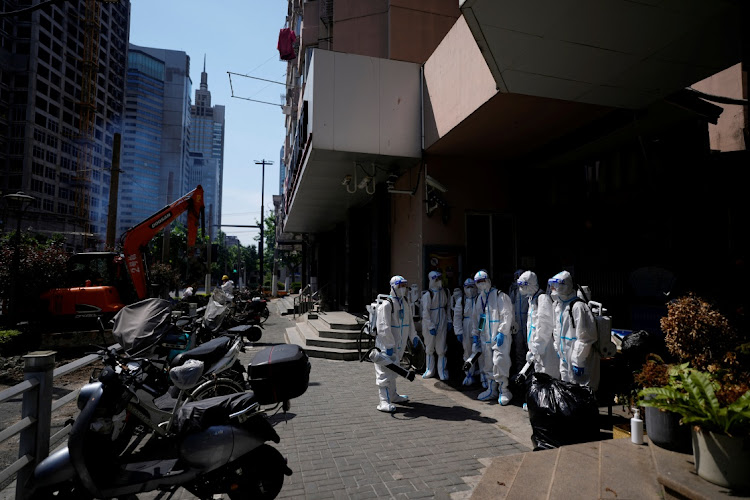 HEALTH-CORONAVIRUS CHINA Workers in protective suits stand on a street as they disinfect during lockdown, amid the coronavirus disease (COVID-19) pandemic, in Shanghai, China, May 18, 2022. REUTERS/Aly Song
Image: ALY SONG

Shanghai/Beijing — Health authorities in Shanghai face huge pressure to keep Covid-19 at bay the longer the city goes without a new community infection, with residents counting down the days until June 1 2022 and the end of their hated lockdown.

The commercial hub of 25-million achieved a fourth consecutive day without any new infections in the community, keeping hold of its prized zero-Covid status and keeping alive hopes for an imminent end to lockdown misery.

Despite no new cases, authorities are not lifting the lockdown immediately, instead gradually easing restrictions until June 1, with some shops allowed to open this week and public transport expected to partly resume over the weekend.

Very few people have been getting passes to go outside from the volunteer managers of their residential compounds.

“The risk of finding positive infections among risk groups still exists and the pressure of ... preventing a rebound remains huge,” Zhao Dandan of the municipal health commission told reporters on Wednesday.

China has chosen to ruthlessly restrict movement and isolate people to end any outbreak, no matter the economic cost.

The government of Shanghai's Xuhui district posted pictures on its social media account of workers planting flowers alongside largely deserted streets to ensure a “clean and beautiful” environment for the “resumption of work and production in the city”.

But in the central district of Changning, big piles of trash spilt onto the roads in a sign of how the city has struggled to maintain services during the lockdown.

The US, Europe and other regions have lifted restrictions to “live with the virus” and get their economies going even as infections spread.

But China has chosen a radically different path, ruthlessly restricting movement and isolating people to end any outbreak, no matter the economic cost.

Defeating the highly transmissible Omicron variant has proven an uphill battle, as the struggle in the capital, Beijing, over the past month has shown.

Beijing authorities have been discovering dozens of new cases almost every day since April 22 2022.

While most Beijing residents are working from home, they can at least wander about outside, albeit with few places to go, as many shops, gyms and other businesses have closed in several districts.

“I’m happy that we are not confined at home like in Shanghai, but still pretty frustrated at what’s happening, as most of the countries have already moved on from [Covid-19],” said Lin Cong, 27, who lives in Chaoyang district, the epicentre of the outbreak.

“It’s difficult to watch when my friends in other countries are able to travel and move freely without a mask, while you don’t know when you can live a normal life.”

Overall, Shanghai reported fewer than 1,000 new cases for May 17 2022, all in areas under the strictest controls, with no new cases found in the relatively freer communities for a fourth day. Beijing reported 69 cases, up from 52.

China's uncompromising zero-Covid policy has placed hundreds of millions in dozens of cities under various restrictions and disrupted a global rebound in production of everything from mobile phones to electric vehicles.

Companies from Apple to Tesla have taken a hit.

E-commerce group JD.com reported better-than-expected revenue, as more people shopped online due to the Covid-19 curbs, but it was cautious on its outlook, saying consumers are losing income and confidence and logistics have been disrupted.

Still, investor sentiment towards JD.com and its peers has improved on comments Vice Premier Liu He made at a Tuesday meeting with tech executives, which fanned hopes that a regulatory crackdown on the sector was easing.

The unprecedented crackdown, which began in late 2020, has hit Chinese technology companies and roiled markets, shaving billions of dollars in market value off the firms, and weighing heavily on an important growth driver.

A more freewheeling tech sector would not, however, make up for the headwinds China is facing from Covid-19, a property sector downturn, geopolitics and rising borrowing costs in the US and elsewhere.

Economic data this week showed China's consumption and factory output fell in April 2022 at a pace unseen since early 2020, as the novel coronavirus, first detected in Wuhan city in late 2019, was beginning its global spread.

China is likely to struggle to stage a quick recovery without compromising on its zero-Covid policy, analysts say.

Plan will be carried out in stages, with movement curbs largely to remain in place until May 21
World
1 month ago

A video posted on Twitter shows students from Peking University protesting against restrictions, a sign of mounting frustration with the country’s ...
News
1 month ago
Next Article