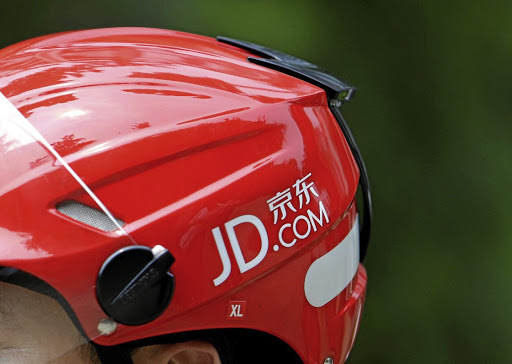 A JD.com logo is seen on the helmet of a delivery man in Beijing. Picture:REUTERS

US and Chinese regulatory officials are in talks to settle a long-running dispute over the auditing compliance of US-listed Chinese firms, according to three informed sources.

The standoff, if not resolved, could see Chinese firms evicted from New York bourses.

The US Public Company Accounting Oversight Board (PCAOB) denied an earlier Reuters report that a team from the agency had arrived in Beijing for talks.

The US Securities and Exchange Commission (SEC) has added more than 80 firms, including e-commerce giant JD.com and China Petroleum & Chemical Corp to the list of companies facing possible expulsion.

The talks between officials from the PCAOB and their counterparts at the China Securities Regulatory Commission (CSRC) can be described as “late stage” after China made concessions in recent months, said the sources.

He said the board continues to engage with the Chinese authorities but “speculation about a final agreement remains premature”. As a result, the PCAOB is planning “for various scenarios”.

The CSRC on Friday did not respond directly on the status of discussions. It referred Reuters to official statements from both sides but did not specify which statements.

The sources asked not to be identified due to the sensitivity of the issue.

Sources told Reuters last month that a preliminary framework has been formed for audit supervision co-operation between the two countries.

The spat over audit oversight of New York-listed Chinese companies, simmering for more than a decade, came to a head in December when the SEC finalised rules to delist Chinese companies under the Holding Foreign Companies Accountable Act. It said there were 273 companies at risk but did not name them.

Since Friday, the PCAOB has identified 128 Chinese firms as at risk of being delisted.

The issue has been a big factor dragging on American depositary receipts (ADRs) issued by Chinese firms, with the Nasdaq Golden Dragon China Index tumbling 57% over the past 12 months.

Goldman Sachs estimated in March that US institutional investors held about $200bn worth of Chinese ADRs.

In addition to the concessions by Chinese regulators, there have been other signs that a deal is in the offing.

In late March, sources said the CSRC asked some of the country’s US-listed firms, including Alibaba Group Holding, Baidu and JD.com, to prepare for more audit disclosures. Late last month Fang Xinghai, the CSRC’s vice-chair said he expected a deal in the near future.

China developers have two weeks to come clean on debt

China developers have two weeks to come clean on debt