Beijing is doing better two weeks into its outbreak than Shanghai did at that point, when daily Covid-19 cases were in the hundreds and rising 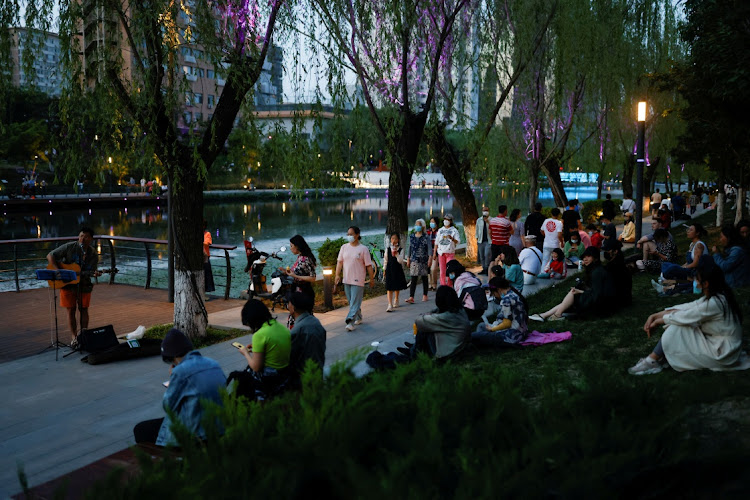 A man plays the guitar as people walk on a pedestrian promenade along the banks of a river during a five-day Labour Day holiday, amid the COVID-19 outbreak in Beijing, China on May 3 2022. File Picture: REUTERS/Carlos Garcia Rawlins

Beijing/Shanghai — Beijing returned to work on Thursday after a five-day Labour Day holiday with China’s capital on high Covid-19 alert as it tries to eradicate an outbreak it has managed to limit to dozens of new cases a day for about two weeks.

Authorities in Beijing are determined to avoid the fate of China's commercial hub of Shanghai, where most of its 25-million people have endured more than a month of increasingly frustrating confinement to their residential compounds.

The capital’s streets were slightly less busy than on a normal working day as authorities have encouraged people to work from home and the closure of scores of bus routes and more than 10% of subway stations as part of Covid-19 precautions has complicated commuting.

Transport officials have also asked ride hailing platforms to reduce activity in some parts of the city.

Still, many subway trains looked crowded and office districts were busy. Many people took to bicycles to get around.

Under a host of new curbs in recent days, Beijing residents hoping to take the subway or bus have to have a negative Covid-19 test but it appeared that few checks were being made.

“Right now, I feel relatively safe at work and where I live, but I don’t dare run around outside because I still feel the outbreak hasn’t reached its peak,” said cook Liu Wentao.

Beijing was doing better two weeks into its outbreak than Shanghai did at that point, when daily cases were in the hundreds and rising.

The apparent success in keeping a lid on the outbreak has enabled authorities to make small adjustments to restrictions.

Some small parts of Chaoyang district, the epicentre of Beijing's outbreak, which had put restrictions on movement, allowed people to go to work on Thursday though they were encouraged to work from home if possible and avoid gatherings.

Some isolated lockdowns of residential buildings and the closure of gyms, restaurants and other venues remained in force.

In Shanghai, while authorities say curbs on movement have been gradually eased in recent days in more areas, there was no significant change for many people living in communities under lockdown.

China’s uncompromising “zero-Covid-19” policy looks increasingly bizarre to an outside world that is easing curbs or lifting them altogether in a bid to live with a disease that authorities in those places have concluded can never be eradicated.

China argues its policy is saving lives, which makes the heavy economic and psychological costs of the lockdowns worth it.

Officials point to millions of Covid-19 deaths outside China while its official death toll since the virus emerged in the central city of Wuhan in late 2019 is just over 5,000.

Vice-premier Sun Chunlan said in Shanghai on Sunday that communities with no new cases for seven days should be allowed to return to “normal social order”.

Yet often seemingly arbitrary enforcement of rules is a source of anguish for Shanghai residents.

In some communities, people enforcing the rules only allow one member of each household out for a few hours a day.

Elsewhere, no-one is allowed out even though the community's risk level has been officially downgraded.

The enforcers deny being told they can relax the rules and residents struggle to identify who exactly has the authority to ease them.

In some districts, buildings are assigned stars according to when their last Covid-19 cases were recorded with the top rank of five stars indicating no new cases for at least two months.

On Thursday, a WeChat group of locked-down residents in a block of nearly 100 flats in the city's Changning district, pinged with celebration at finally getting five stars.

“Great. Can I take the dog out for a walk?” one resident asked.

“I'm sorry, for the moment we are not allowed to take dogs for walks,” the building's volunteer manager responded.