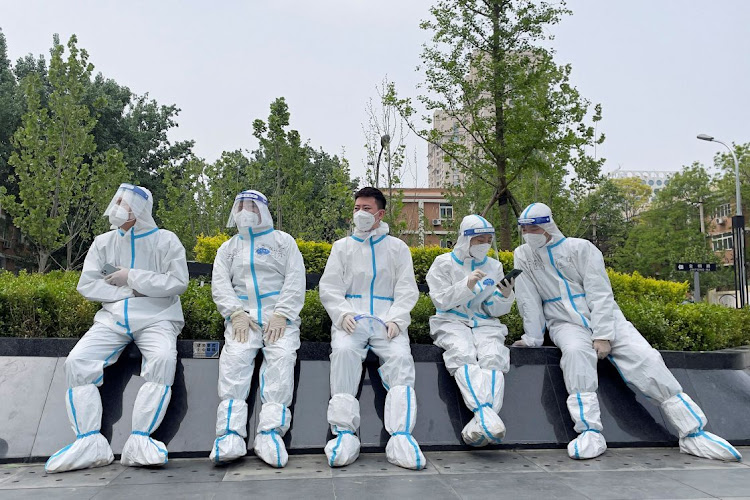 Workers in protective suits rest near a makeshift nucleic acid testing site amid the Covid-19 outbreak in Beijing, China, on April 29 2022. REUTERS/ALESSANDRO DIVIGGIANO

Beijing/Shanghai — China’s capital Beijing closed more businesses and apartment blocks on Friday, with authorities ramping up contact tracing to contain a Covid-19 outbreak, while resentment at the draconian month-long lockdown in Shanghai continued to grow.

In the finance hub, fenced-in people have been protesting against the lockdown and difficulties in obtaining provisions by banging on pots and pans in the evenings, according to a Reuters witness and residents.

A video shared on social media, whose authenticity could not be immediately verified, showed a woman warning people via a loud-hailer not to do so, saying such gestures were being encouraged by “outsiders”.

The Shanghai government did not immediately respond to a request for comment.

In Beijing, authorities were in a race against time to detect Covid-19 cases and isolate those who have been around them.

Polish resident Joanna Szklarska, 51, was sent to a quarantine hotel as a close contact, but she refused to share the room, which had only one bed, with her neighbour.

She was sent back home, where authorities installed a front door alarm. Then she was called back to the hotel, where she now has her own room.

“Nothing makes sense here,” the English-language consultant said by phone.

The Chaoyang district, the first to undergo mass testing this week, started the last of three rounds of screening on Friday among its 3.5-million residents. Most other districts are due for their third round of tests on Saturday.

Chaoyang, which has the biggest share of cases in Beijing, declared more neighbourhoods to be at risk.

People who had recently visited venues in such areas have received text messages telling them to stay put until they get their test results.

“Hello citizens! You have recently visited the beef noodles and braised chicken shop in Guanghui Li community,” one such text read. “Please report to your compound or hotel immediately, stay put and wait for the notification of nucleic acid testing.”

“If you violate the above requirements and cause the epidemic to spread, you will bear legal responsibility.”

Companies such as JD.com, an e-commerce platform, have been striving to keep residents well supplied.

The head of one of its logistics centres on the outskirts of Beijing, 32-year-old Ming Tang, said delivery volumes have increased by 65% since the first cases emerged on April 22, and 80% of the parcels are food-related.

“The effort of delivering parcels on time and long working hours put a lot of pressure on our couriers,” he said.

Beijing reported 49 cases on April 28, versus 50 the previous day, a far cry from Shanghai's numbers.

The April 30-May 4 Labour Day break is traditionally one of China’s busiest tourist seasons, and hotels are expected to suffer heavy losses this year.

Tourism is on a long list of industries disrupted by Covid-19 curbs around the country, from finance and electronics manufacturing in Shanghai to Jilin in the northern rust-belt.

Chinese authorities say being Covid-19 free is vital to save as many lives as possible.

“We must realise that the virus is what’s hurting the economy,” said Liang Wannian, head of the Covid-19 response expert panel under the National Health Commission. “Covid-19 control and economic development are in synergy with each other.”

“The battle against the Covid-19 epidemic is a war, a war of resistance, a people’s war,” Liang said.

In Shanghai, after a month in lockdown, authorities said more people have been gradually allowed to leave their homes in recent days. More than 12-million residents, nearly half the population, are now in that category.

Still, many cannot leave their housing compounds, while those who can have few places to go to as shops and other venues are closed.

While some delivery bottlenecks have been eased in the city, criticism of the government has continued to grow particularly over the subject of food provisions. Residents in some districts complain their rations have been less frequent than in others, taking to social media to compare deliveries.

The lockdown is driving scores of foreigners to flee mainland China's most cosmopolitan city.

“Until the lockdown I really couldn't feel the authoritarian government, because you're more or less free to do what you want and I never really lived oppressed,” said Jennifer Li, a foreigner who is making plans for her family to leave.

City locks down residential compounds, office blocks and a university after infections are found
World
1 month ago
Next Article