City locks down residential compounds, office blocks and a university after infections found 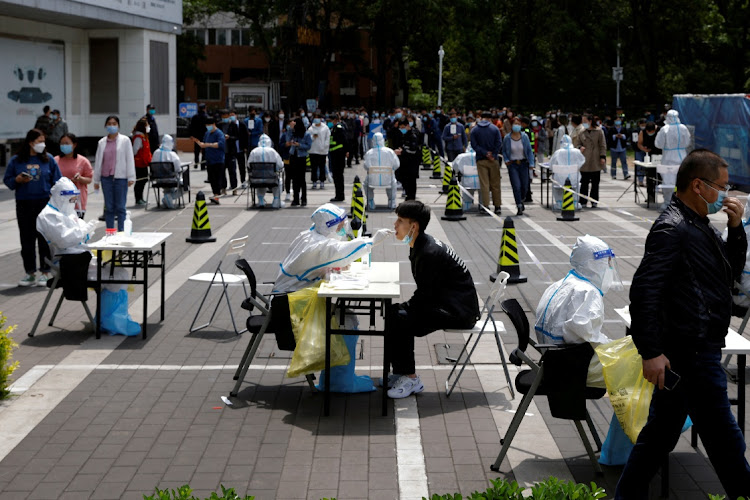 Beijing — The Chinese capital of Beijing closed public spaces and stepped up checks at others on Thursday as most of the city’s 22-million residents embarked on more Covid-19 mass testing aimed at averting a Shanghai-like lockdown.

As Beijing rolled out three rounds of mass testing this week across a number of districts, it locked down a number of residential compounds, office blocks and a university after infections were found. Some schools, entertainment venues and tourist sites were also shut.

Universal Studios in Beijing announced late on Wednesday it would require visitors to show negative test results before they could enter the theme park, starting on Friday.

Across Beijing, positive cases were found among the nearly 20-million samples acquired in the first round of mass testing, but numbers remained small. On Thursday the city reported 50 new infections for April 27, up from 34 a day earlier.

Since April 22 Beijing has found more than 160 cases, more than half in Chaoyang, the most populous district known for its nightlife, malls and embassies.

Despite the low caseload, Beijing remained on edge.

Andrew Ward, 36, a Canadian living in one of Beijing’s narrow lanes of courtyard houses known as hutongs, was sent to quarantine in a hotel on Thursday even though his test results were negative.

On Wednesday, people in hazmat suits visited his home in Dongcheng district to test Ward for Covid-19 after officials said he was a close contact of a positive case.

“I’m a little bit annoyed, because I spent all that money and time stockpiling food for being locked down at home,” said Ward, who works at an international school.

Dongcheng on Thursday sealed off a few hutongs after one infection was found. The district, as well as Xicheng, another at the core of downtown Beijing, announced on Thursday that all of their cinemas had been shut.

In the north of Beijing, Yanqing, a small district with a population of 350,000, said it will start screening those who live and work in the area, even though it is not on the list of districts ordered to conduct mass testing this week.

Pinggu, a district in the northeast of Beijing, also said it will test its population of 457,000 on Thursday and Saturday.

When the outbreak in Shanghai began, new infections were less than 100 a day from March 1-10 before doubling and then surging to more than 700 by March 20. By the end of March, thousands of new infections had been reported, prompting a citywide lockdown and upending the lives of its 25-million residents.

So far Beijing has largely allowed residents to go to work even as they get tested, unless infections are found and localised lockdowns are required.

“We’ll have to stay at the dormitory first, then come back to work after the lockdown is lifted,” said a migrant worker surnamed Wu, who arrived in Beijing on Wednesday after a 10-hour train journey with a friend.

The two were to begin work in a canteen of the Beijing University of Technology, but that did not happen after residential compounds next to the university went into a lockdown. After a long discussion with staff at the university, they were told to stay at a dormitory under lockdown.

“We can cook in the dormitory, and I’m sure it’s only a matter of time until the lockdown is lifted,” said Wu. “I won’t ask for money if I don’t work.”