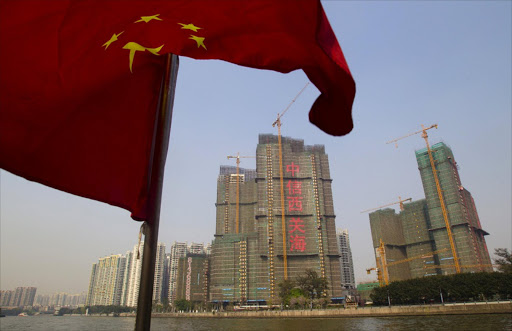 China’s President Xi Jinping made a bold commitment to boost infrastructure construction in Beijing’s latest bid to rescue economic growth, a strategy that may prove less effective this time about as authorities take a hardline approach to bringing Covid-19 outbreaks under control.

All-out efforts must be made to spur infrastructure spending, Xi said Tuesday at a meeting of the Central Committee for Financial and Economic Affairs. Infrastructure was a pillar of economic and social development, Xi added, according to a report from the state-run Xinhua News Agency.

Officials at the meeting agreed that China’s infrastructure was still incompatible with the demand for national development and security, according to Xinhua. Strengthening infrastructure construction in an all-round way is of great significance to ensuring national security, expanding domestic demand and other objectives, it said.

Xi’s comments show China is returning to its old playbook of driving up growth through public investment, an approach that’s fuelled debt in the past and caused overcapacity in some sectors, such as large vacant buildings in so-called ‘ghost cities.’ This time, the government may be more reluctant to fuel property investment, given its crackdown on the sector and worries about financial stability risks.

Speeding up construction may also be difficult to accomplish as the government doubles down on its Covid-19 Zero approach, locking down cities like major hubs like Shanghai. Fears are growing of a similar shutdown in the capital Beijing as the city undertakes mass testing of its 22 million people.

“The challenge for China is sequencing,” Tim Moe, Goldman Sachs Group Inc.’s chief Asia Pacific equity strategist said in an interview on Bloomberg TV. “The Covid-19 situation needs to be dealt with to a greater degree before a full-fledged infrastructure spending can really take place. If an entire city is lockdown, it is hard to do a lot of infrastructure spending there.”

Investors are looking for ways to counter the “immediate shocks” to growth in the current quarter, Moe said.

So far, authorities have disappointed financial markets by providing limited stimulus and failing to follow through pledges with concrete actions. The benchmark CSI 300 stock index closed at its lowest level in two years on Tuesday, while the yuan has tumbled to its weakest level since November 2020.

Xi’s pledge fuelled a stocks rally on Wednesday though, with the benchmark CSI 300 Index climbing as much as 2.7%, the best performing major Asian market, led by technology and industrial shares. The offshore yuan strengthened 0.1% to 6.5832 as of 2:12pm local time.

Economists have downgraded their growth forecasts steadily in recent weeks, with Morgan Stanley cutting its projection for this year by 40 basis points to 4.2%, well below the government’s target of about 5.5%.

Xi told local authorities to bolster the construction and efficiency of infrastructure networks in fields such as transport, energy and water conservation. Official also urged increased fiscal spending, a “broadening of long-term financing channels” for construction, and better co-operation with private capital on such investment.

China had already pinned its growth hopes on infrastructure before Xi’s latest call to help prop up the economy amid a property market slump and rising global risks.

Local governments had planned investment on major projects this year of at least 14.8 trillion yuan ($2.3 trillion), according to a Bloomberg analysis. That’s more than double the new spending in the infrastructure package the US Congress approved last year.

Though infrastructure investment remained strong in the first quarter, according to official data, there are signs the lockdowns have curbed construction activity. Areas of new construction in the country’s main economic belts about the cities of Shenzhen, Shanghai and Beijing plummeted during March, satellite data show. 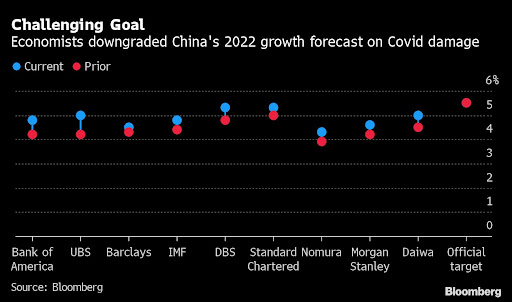 What President Xi Jinping’s pledge to increase infrastructure construction is the latest sign more stimulus is on the way. China has the firepower. Trouble is, lockdowns and other virus curbs on activity are hindering policy support and depressing sentiment. A significant confidence boost is required. A clear road map for exiting Covid-19 Zero is what’s needed to turn the economy about.

Even though the current push will be “modernised” with a focus on digital and green sectors, “both involve borrowing and front-load the future,” he said. “Credit expansion is unavoidable,” he added.

Local governments are speeding up bond sales to pay for infrastructure, though many of them are financially stretched because of declining revenue from property sales.

All eyes are on the Communist Party’s Politburo — its top decision-making body — which is expected to gather for a critical meeting in coming days. Several prominent policy advisers and Chinese economists have called on the government to take more decisive measures to prop up the economy, ranging from the relaxation of property and internet curbs to acting with more flexibility when it comes to Covid-19 restrictions and lockdowns.

There are signs the weakening growth outlook and market fallout are becoming a greater concern to policymakers. Earlier Tuesday, the People’s Bank of China sought to reassure markets with a broad pledge to step up support through targeted financing for small businesses and a quick resolution of an ongoing crackdown on technology firms.

Xi’s infrastructure pledge comes on the back of a high-profile campaign to curb debt, especially in property, and officials will need to balance that objective with a push to boost growth.

Some officials are reluctant to ease restrictions in the property market despite the economic fallout, according to the Financial Times. Vice Premier Liu He supports loosening moves, while his peers Han Zheng and Hu Chunhua insist property developers’ use of project revenues must remain tightly regulated, the newspaper said in a report, citing unidentified officials as saying.

Bank is said to step up support for several developers by allowing banks and bad-debt managers to loosen restrictions on some loans to ease a cash ...
News
3 weeks ago