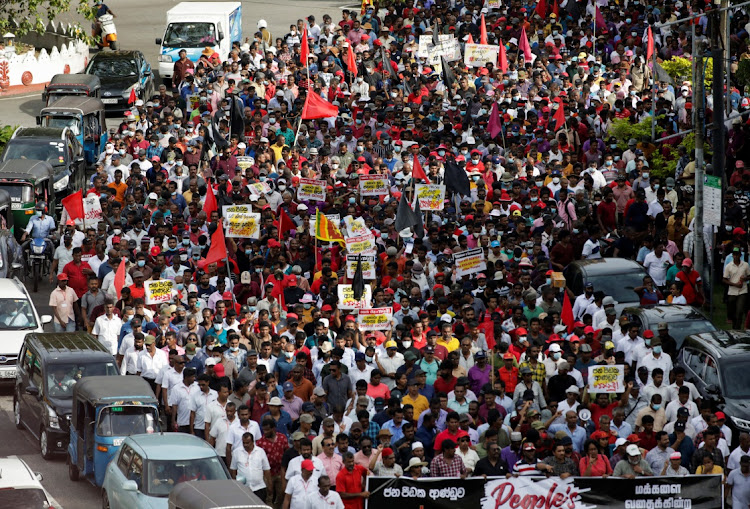 Rambukkana — Sri Lankan police will launch an “impartial and transparent” investigation of clashes with protesters after the first death in weeks of unrest over the government’s handling of the economy, the president said on Wednesday.

Police fired live ammunition to scatter protesters on Tuesday in the town of Rambukkana, northeast of the capital Colombo, killing one person and wounding a dozen.

Demonstrations have roiled the South Asian island nation of 22-million people for weeks, with many infuriated by shortages of fuel and other items and prolonged power cuts.

The shooting broke out after protesters blocked a railway line and stopped a fuel tanker attempting to cross it, residents and a government minister said.

Police will “carry out an impartial and transparent inquiry regarding the incident at Rambukkana which led to the tragedy for which I’m deeply saddened. I urge all citizens to refrain from violence as they protest.”

Senior police spokesperson Ajith Rohana said a 20-member team had been formed to investigate the incident and one person had been arrested.

KD Chaminda Lakshan had gone to the petrol station at Rambukkana to fill his motorcycle when he got caught up in the clashes, his family said.

“I want justice for the crime committed against my father,” his daughter, Piumi Upekshika Lakshani, said as mourners sat around the family’s hillside home.

Rambukkana was calm on Wednesday with minimal security on the streets. A four-member police forensics team combed the area around the railway crossing.

Police also cordoned off part of the petrol station where violence also flared, including a small dusty, bloodstained patch. Rocks, ammunition casings and spent teargas canisters were strewn about.

“One hundred percent, the responsibility is with the police,” resident Indika Priyantha Kumara said.

“You can’t blame the people,” said Kumara, who had a bandage on his forehead for an injury he said was sustained in the clash.

The director of the Kegalle Teaching Hospital said 14 people were brought in and one died of his injuries. Three were in intensive care after surgery.

Twenty police were also brought in but had been transferred to the nearby town of Kandy, she said.

“Police acted according to the law,” he said. “This shooting happened after police did everything they could to bring this situation under control. We will conduct multiple investigations.”

Tuesday’s death was the first in the largely peaceful protests that began in March.

It comes as Sri Lankan officials meet the IMF to discuss an emergency loan programme to tackle the shortages of fuel and other essentials.

The IMF said the discussions were at an early stage and any deal would require “adequate assurances” that Sri Lanka could resolve its unsustainable debt situation.

Options to deal with the billions owed by poor nations are disappearing, says IMF head Kristalina Georgieva
News
2 months ago