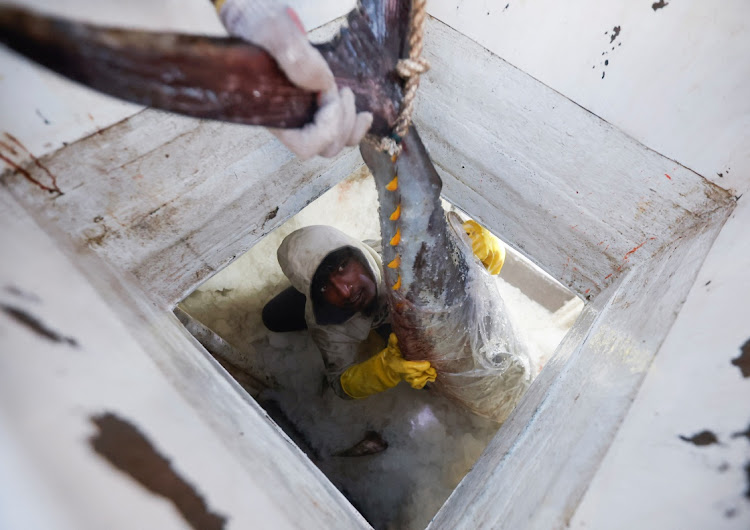 A man works as he unloads tuna fish from an ice freezer of a fishing trawler in Negombo, Sri Lanka, on April 16 2022. Fishermen and their families are struggling due to a lack of diesel and a price hike over the last few months amid an economic crisis. Picture: REUTERS/NAVESH CHITRAKAR

Negombo — After three weeks at sea, Anton Fernando tallies his sales of tuna and other fish on a dock in Negombo, a fishing town in Sri Lanka, where the country’s financial crisis darkens already murky waters.

The sums don’t look good for Fernando and his crew of four among the dozen gently bobbing trawlers. Each takes home 40,000 Sri Lankan rupees ($130) from their gruelling expedition.

“This will not be enough to cover their household expenses,” Fernando, 44, said, holding up a notebook scribbled with numbers. “Even before we go home, we know this isn’t enough to cover electricity and water bills, tuition fees and food.”

The island nation of 22-million people off the southern tip of India is battling its worst financial crisis since independence in 1948, as Covid-19, mismanaged government finances and ill-timed tax cuts sap dwindling foreign reserves.

Last week the central bank said it was suspending repayment on some of its foreign debt pending a restructure.

In the commercial capital Colombo, protesters crowd the streets demanding the removal of President Gotabaya Rajapaksa as people deal with rocketing prices, prolonged power cuts and shortages of medicine, fuel and other items. At least one protester was reportedly killed when police fired teargas at protesters.

In Negombo, the fishers struggle to stay afloat. Fishing accounts for just 1.3% of the Southeast Asian nation’s economy, but it employs one-tenth of its people and helps feed far more. The island exports tuna, swordfish, crabs, lobsters and prawns to a dozen countries including the US, Britain, China and Japan, accounting for 8% of its agricultural exports.

Some fishers say they have cut back on food, others have stopped repaying loans. All of those who spoke to Reuters say they constantly scrounge for fuel for their boats and their homes.

In Negombo, a tight-knit fishing community 40km from Colombo, workers pull fish from docked boats, weigh them and pile them into a handful of refrigerated trucks.

Each trip for Fernando’s colourful St Anne 2 trawler requires at least 1,000l of diesel and several hundred kilograms of ice.

“We have to stand in line for hours to get fuel and even then we are not sure if we will get enough. Ice, bait, nets, everything we need has increased in price,” he said. “Many boats have stopped going out to sea entirely because of the fuel issue.”

Two fishers with small boats said they siphon petrol from friends’ and neighbours’ motorcycles because fuel stations refuse to fill their jerry cans.

Finance minister Ali Sabry said earlier in April the government’s priority was to restore essentials such as fuel. Some of the aid the government is seeking from lenders such as the IMF would go to the country’s economically vulnerable populations.

“Fishers don’t know how they will get fuel or how they will manage high food costs,” said Herman Kumara, head of the National Fisheries Solidarity Movement that represents 9,000 fishers. “Their only focus is to live today.”

The crisis has grounded at least half the area’s trawler fleet, he said, predicting “a life-and-death situation here over the next three to six months”.

Mary Dilani said she makes 1,500 rupees a day drying fish at a nearby beach, while her husband GK Chaminda, who borrowed 100,000 rupees three years ago for a small rowing boat and now struggles to repay the loan, makes 2,000 rupees.

“We cannot afford cooking gas any more,” she said in their two-room house at a plastic-strewn beach in Negombo’s Sea Street neighbourhood, where they live with their two daughters and granddaughter. “I have switched to a kerosene stove but sometimes we cannot find kerosene.”

The family’s biggest worry is finding 4,000 rupees for textbooks for a daughter about to start the new school year.

2016 Rolex Awards for Enterprise Laureate Kerstin Forsberg knows that it’s only by understanding the importance of giant manta rays that we can begin ...
Life
2 months ago

Make mine a seafood platter

Global network of acoustic sensors tracks the heartbeat of the planet

Global network of acoustic sensors tracks the heartbeat of the planet