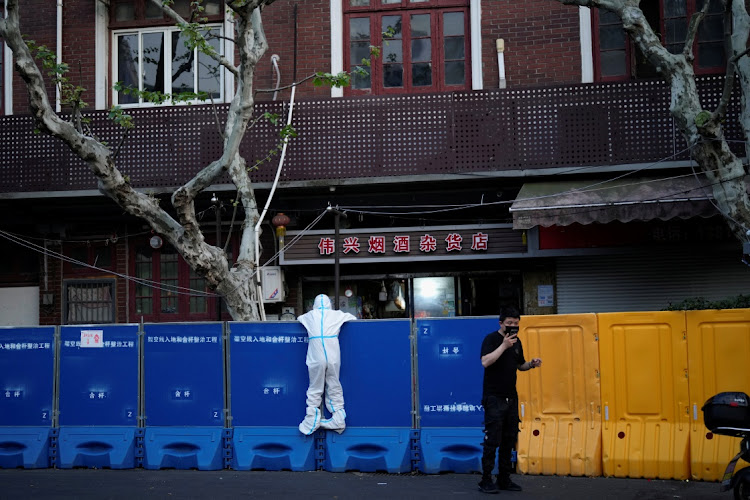 A person in a protective suit looks over barricades set around a sealed-off area, during a lockdown to curb the spread of the coronavirus disease in Shanghai, China, on April 11 2022. REUTERS/ALY SONG

Shanghai — Some residents of Shanghai stepped out of their homes for the first time in more than two weeks on Tuesday as the city eased its strict Covid-19 lockdown.

Shanghai said on Monday that more than 7,000 residential units had been classified as lower-risk areas after reporting no new infections for 14 days, and its districts have since been announcing which specific compounds can be opened up.

But while some people were allowed out of their residences on Tuesday, there was still confusion about the extent to which those in the lower-risk zones were free to move, with many still awaiting permission from their residential committees.

Residents from lower-risk zones known as “prevention areas” are still subject to controls and will have to observe strict social distancing measures, city health official Wu Qianyu said at a press briefing.

“After a long period of lockdown, it is understandable that people want to go out and get some air, and they need to go shopping for food and medicine and go for medical treatment,” she said. “But if lots of people gather in a disorderly way, it will cause hidden dangers to our epidemic prevention work.”

But experts said it was still too early to say whether the city was getting to grips with the outbreak, China’s biggest since the coronavirus was first discovered in late 2019.

Zhang Boli, a medical expert and government adviser, said the multiple points of transmission made the current flare-ups different from previous ones. “It might take more time than previously, it isn’t easy to make predictions,” he told the Health Times newspaper.

Amid concerns about the tough curbs, the US state department has ordered its non-emergency government workers to leave its consulate in Shanghai.

With the economy under increasing strain, efforts are being made in Shanghai to reopen supermarkets, convenience stores and pharmacies, but non-essential businesses will remain suspended, said Liu Min, vice head of the city’s commercial commission.

Nomura estimates that as many as 45 cities in China are implementing either full or partial lockdowns, making up 26.4% of the country’s population and 40.3% of its GDP. The figure of 45 cities may even underestimate the full impact of China’s current “zero Covid” policies, with mobility disrupted elsewhere too, it said.

Premier Li Keqiang warned on Monday that China needed to be “highly vigilant” against further downward pressures on the economy and said the fight against Covid-19 needed to be “co-ordinated” with economic and social development.

China is encouraging long-term investors to buy more equities and shareholders of listed firms to increase their holdings when stocks slump, in a bid to stabilise a stock market rocked by the worsening Covid outbreak, the country’s securities watchdog said late on Monday.

China’s CSI300 index fell 3.1% on Monday, the biggest drop in a month. The benchmark fell to a near four-week low early on Tuesday.

Under the new measures, areas in Shanghai will be classified as ‘precautionary’ or ‘controlled’ depending on the results of the latest round of ...
World
4 months ago

Citizens complain of unsanitary quarantine centres, difficulty buying food and accessing medical treatment and the separation of Covid-positive ...
World
4 months ago
Next Article

WHO says two-thirds of Africans have been infected by coronavirus

WHO says two-thirds of Africans have been infected by coronavirus