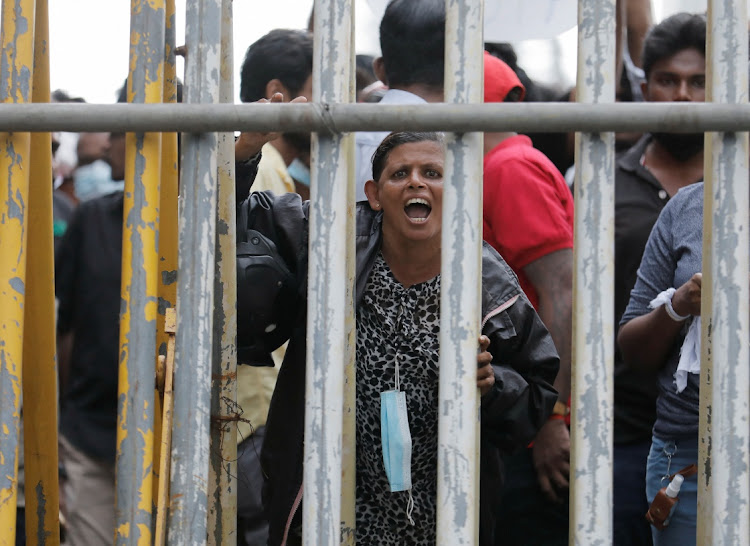 A woman attends a protest to demand Sri Lankan President Gotabaya Rajapaksa resign after his government lost its majority in the parliament, amid the country’s economic crisis, near a road leading to the parliament building in Colombo, Sri Lanka, on April 5 2022. Picture: REUTERS/DINUKA LIYANAWATTE

Colombo — In 2020, Mahinda Rajapaksa won elections to become Sri Lanka's prime minister, serving under his brother and president Gotabaya. In 2021, another sibling, Basil, was named finance minister, tightening the family's hold on power.

Less than a year later, the country's pre-eminent political dynasty is in trouble, as protesters take to the streets making demands that would have been unthinkable before the economic crisis struck: that the president steps down.

“Gota go home!" hundreds of people chanted along a leafy boulevard in Sri Lanka's commercial capital Colombo this week as cars drove past, honking their horns in support.

From beachside towns in the south to the Tamil-speaking north, more than 100 demonstrations have broken out across the island nation since last week, according to the WatchDog research collective.

The unprecedented wave of spontaneous protests reflects people's anger at spiralling inflation, fuel shortages, power cuts and what they see as rulers' mismanagement of the crisis that has made it worse.

“Sri Lankans are very, very patient. You've really got to push them into a corner before they react," said Chantal Cooke, a protester, holding a banner demanding that the Rajapaksas resign.

Within parliament, too, the family is losing ground.

Basil resigned on Sunday along with other members of the cabinet, and on Tuesday at least 41 lawmakers walked out of the ruling coalition, leaving the government with a minority in the 225-member house and opening up the possibility of a no-confidence motion.

“The more [the crisis] gets dragged on, the worse it will be for the Rajapaksa family," said political analyst Kusal Perera, who has written a book on Mahinda, himself a former president.

The president's office did not immediately respond to a request for comment on the crisis and on calls for him to resign.

But chief government whip and highways minister Johnston Fernando said Gotabaya, now 72, had been given a mandate to govern by 6.9-million voters, the number who supported him in presidential elections in 2019.

“As a government, we are clearly saying the president will not resign under any circumstances," Fernando told parliament on Wednesday. “We will face this."

The fifth of nine siblings born to a political family in Sri Lanka's Buddhist-dominated south, Nandasena Gotabaya Rajapaksa joined the Sri Lankan military in 1971 and took part in operations against the Tamil insurgency during the country's 26-year civil war.

In 2005, years after he retired and emigrated to the US, Gotabaya returned to Sri Lanka and joined Mahinda's government as defence secretary, overseeing the brutal end of a civil war that killed between 80,000 and 100,000 people overall.

The US has accused both sides of war crimes during the conflict, and Gotabaya faced civil prosecution for alleged wartime atrocities. He has maintained his innocence, and the case was dismissed due to political immunity.

Riding a nationalist wave in the wake of deadly attacks by Islamist militants earlier that year, Gotabaya swept to power in 2019 with a landslide mandate.

“We will ensure [Sri Lanka] will not stand disappointed during our tenure," Mahinda said after his victory in 2020. The island nation was already on the path to crisis by then.

Historically Sri Lanka has had weak finances where expenditure has exceeded income.

Some critics say that frailty was compounded when Gotabaya enacted deep tax cuts soon after taking office, only for the Covid-19 pandemic to further decimate the tourism-reliant economy.

Despite vocal appeals from some experts and opposition leaders, the government declined help from the International Monetary Fund (IMF) for months, even as the financial crisis worsened, leaving foreign exchange reserves perilously low.

They stood at about $2.31bn as of February, while Sri Lanka faces debt payments of about $4bn during the rest of this year.

After a shift in stance, Sri Lanka is due to start talks with the IMF this month.

In a televised address in mid-March, Gotabaya said he understood the pain that ordinary Sri Lankans were facing, as imports stalled because of the lack of foreign exchange and as inflation rocketed.

“I am well aware of the shortages of essential items and increase in prices," he said. “I am also aware of issues such as gas shortages, fuel shortage and power cuts."

But he distanced himself from the problems, saying: “This crisis was not created by me."

The red line has been crossed. Public confidence in this government has dropped to absolute zero

For some protesters and opposition politicians, that changes little.

“The red line has been crossed. Public confidence in this government has dropped to absolute zero," said Udaya Gammanpila, a former cabinet minister in the Rajapaksa administration.

Back on Colombo's streets, outside a theatre that bears Mahinda Rajapaksa's name, protester Cooke said the Rajapaksas had to go.

“People are not going to settle for anything other than them all leaving," she said. “They want all of them out."

The government is grappling with limited foreign reserves and inflation, which is the highest in Asia
News
4 months ago
Next Article