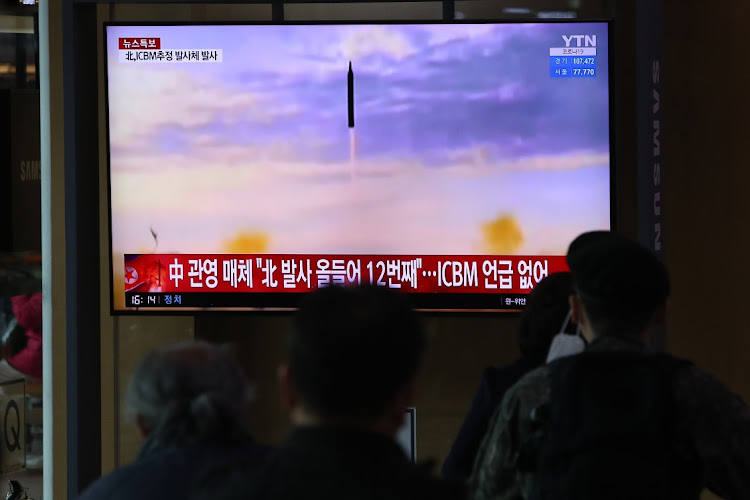 North Korea conducted what is thought to be its largest intercontinental ballistic missile (ICBM) test on Thursday, the South Korean and Japanese militaries said, marking a dramatic end to a self-imposed moratorium on long-range testing.

This would be the first full-capability launch of the nuclear-armed state’s largest missiles since 2017, and comes as a major step in the North's development of weapons that might be able to deliver nuclear warheads anywhere in the US.

The North’s return to major weapons tests also poses a new national security headache for US President Joe Biden as he responds to Russia’s invasion of Ukraine, and presents a challenge to South Korea’s incoming conservative administration.

“This launch is a brazen violation of multiple UN Security Council resolutions and needlessly raises tensions and risks destabilising the security situation in the region,” White House press secretary Jen Psaki said in a statement condemning the launch. “The door has not closed on diplomacy, but Pyongyang must immediately cease its destabilising actions.”

North Korea had put its ICBM and nuclear tests on hold since 2017, but has defended the weapons as necessary for self-defence, and said US diplomatic overtures are insincere as long as Washington and its allies maintain “hostile policies” such as sanctions and military drills.

South Korea’s outgoing President Moon Jae-in, who made engaging North Korea a major goal of his administration, condemned the launch as “a breach of the moratorium on ICBM launches that Kim Jong-un himself promised to the international community”. It was also a threat to the Korean peninsula, the region and the international community, and a clear violation of UN Security Council resolutions, said Moon, who leaves office in May.

Thursday’s ICBM launch prompted South Korea to test-fire a volley of its own, smaller ballistic and air-to-ground missiles to demonstrate it has the “capability and readiness” to precisely strike missile launch sites, command and support facilities, and other targets in North Korea if necessary, South Korea’s joint chiefs of staff said in a statement.

Thursday’s launch would be at least the 11th North Korean missile test this year, an unprecedented frequency.

Japanese authorities said the launch appeared to be a “new type” of ICBM that flew for about 71 minutes to an altitude of about 6,000km and a range of 1,100km from its launch site. It landed inside Japan’s exclusive economic zone, 170km west of the northern prefecture of Aomori, at 3.44pm local time, the coast guard said.

South Korea’s Joint Chiefs of Staff put the missile’s maximum altitude at 6,200km and its range at 1,080km.

That is farther and longer than North Korea’s last ICBM test in 2017, when it launched a Hwasong-15 missile that flew for 53 minutes to an altitude of about 4,475km and range of 950km.

South Korea said the latest missile was launched from near Sunan, where Pyongyang’s international airport is located. On March 16, North Korea launched a suspected missile from that airport that appeared to explode shortly after lift-off, South Korea’s military said.

US and South Korean officials have warned recently that North Korea had been preparing to test-fire its largest ICBM yet, the Hwasong-17.

US officials said at least two recent tests, on February 27 and March 5, featured the Hwasong-17 system, but did not demonstrate full ICBM range or capability.

Pyongyang did not identify the missile system used in those launches, but said they were testing components for a reconnaissance satellite system.

Earlier this month, leader Kim said North Korea would soon launch multiple satellites to monitor military movements by the US and its allies.

The missile, which has been shown on a transporter vehicle with 11 axles, would be one of the world’s largest road-mobile ICBMs.

Amid a flurry of diplomacy in 2018, Kim declared a self-imposed moratorium on testing ICBMs and nuclear weapons, but suggested the North could resume such testing amid stalled denuclearisation talks.

That moratorium had often been touted as a success by former US president Donald Trump, who held summits with Kim in 2018 and 2019, but never gained a concrete pact to limit the North’s nuclear or missile arsenals.

On January 19, North Korea said it would bolster its defences against the US and consider resuming “all temporarily suspended activities”, according to state news agency KCNA, an apparent reference to the self-imposed moratorium.

New construction has also been spotted at North Korea’s only known nuclear test site, which was shuttered in 2018.

“Though Biden would prefer to focus exclusively on the Ukraine crisis, it’s likely he will soon face crisis-level tensions between the Koreas,” he said.

With the sanctions regime at an impasse at the UN Security Council and North Korea opposed to talks on denuclearisation for the foreseeable future, Pyongyang is now likely capable of making serious progress on its weapons development programme with little risk of substantive punishment, O’Carroll added.

North Korea has not test-launched an ICBM since November 2017, which was a major breakthrough in Kim’s effort to show he could threaten the entire US ...
News
4 months ago
Next Article