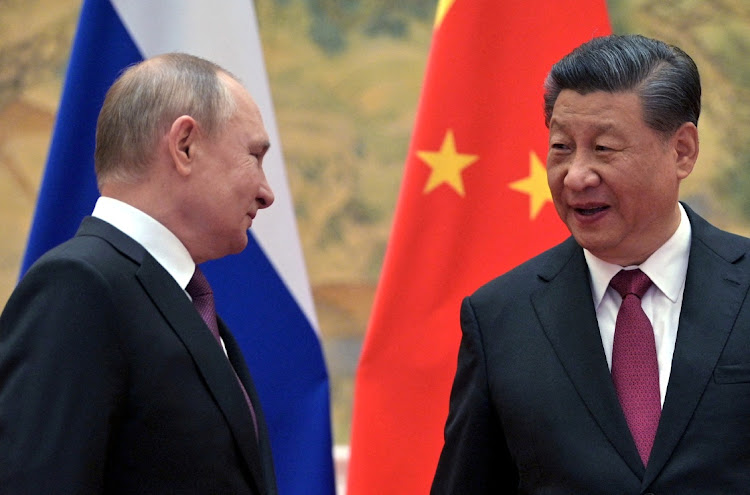 Beijing — Under President Xi Jinping, China has pushed for self-reliance in technology and the payments system needed to settle trade in order to minimise the country’s vulnerability to economic pressure over flashpoints, from trade policy to Taiwan.

Russia’s invasion of Ukraine and the tough global response, including cutting access to the Swift payments system and freezing Russian assets, provide a case study for China on the economic and financial vulnerabilities it could face.

The unexpectedly heavy sanctions, led by the West, have exposed vulnerabilities for Russia, including dependence on the US dollar, that China would want to mitigate before becoming the target of any such measures.

While the China-US trade war during the Trump administration forced China to seek greater self-sufficiency, the sanctions on Russia are a louder wake-up call, said Abraham Zhang, chair of Shenzhen-based China Europe Capital.

“Just as China needs food security, China also needs oil reserves, and a complete industrial system, so that if China is one day cut off from external supplies as Russia is now, China can still be self-sufficient, maintain internal circulation, and survive,” Zhang said.

China has in recent years ramped up efforts to develop home-grown technologies, from semiconductors to advanced materials to aircraft, to ease reliance on imports. Huawei Technologies, crippled by sanctions preventing its access to high-end chips, is a cautionary example.

“China needs to accelerate the development of key technologies. Otherwise, it would be too late once you’re suffocated by sanctions, if Russia offers any lessons,” he said.

To be sure, China has a much bigger and more diversified economy than Russia’s, although it depends on imported energy and food, and relies heavily on global commerce as the world’s largest trading economy.

Also, Ukraine is not Taiwan, which Beijing has vowed to bring under its control, by force if necessary.

The political and geostrategic circumstances are vastly different, including the likely response to a Chinese attack on the democratically controlled island, which among other factors is a linchpin in the global technology supply chain.

Where the US has ruled out intervening militarily in Ukraine, its policy of “strategic ambiguity” towards Taiwan and its strengthening defence ties with the island, including stepped-up arms sales and the development of the Aukus grouping with Australia and Britain, convey a warning.

China, which has declined to condemn Russia’s attack or call it an invasion, has blamed the Ukraine conflict on Nato expansion.

Taiwan has reported no unusual Chinese military movements since the Ukraine war began and US President Joe Biden this week dispatched a team of former senior officials to visit the island in a show of support.

China has in recent years sought to internationalise its currency by settling more trade with the yuan, including with Russia. The yuan accounted for 13.1% of the Russian central bank’s foreign currency reserves last June, compared with just 0.1% in June 2017.

China’s central bank is developing a digital currency, which would have the benefit of further encouraging yuan settlement for trade, but the project, while ahead of efforts elsewhere, is still in its early days.

Bert Hofman, director of the East Asian Institute at the Lee Kuan Yew School of the National University Singapore, said China has been concerned about dollar dominance of international payments since the global financial crisis.

“The sanctions may therefore lead China to accelerate the development of alternative options, including the China-led CIPS system, and the further internationalisation of the [yuan].”

While the unity and strength of the diplomatic response to the invasion, which many experts believe was underestimated by Russia, may be instructive to China, the unexpectedly sluggish early performance of Russia’s forces in Ukraine is less applicable, with the US not engaged there militarily.

US intervention would be China’s biggest worry in the event that it attacked Taiwan, said Yun Sun, director of the China Program at the Washington-based Stimson Center.

Still, she said, China would take comfort that countries that have joined in sanctions against Russia remain in the minority, and that China has yet to face secondary sanctions for its Russia ties.

Steve Tsang, director of the China Institute at the School of Oriental and African Studies in London, said Beijing is unlikely to be happy with the way things are going in Ukraine, but the ultimate effectiveness of the international response would determine its outlook.

If Russia is not brought to its knees, “China will be relatively relaxed about what the West could do when China is finally ready to take Taiwan”, he said.

“If the responses should prove effective against Russia, Xi will be a lot more cautious about when and how he will try to bring Taiwan into the fold,” he said.

‘We will continue to maintain normal economic and trade exchanges with relevant parties,’ the regulator says
World
4 months ago

Supply disruptions raise the risk of a further spike in cooking oil prices in India, which imports 60% of its needs
News
4 months ago