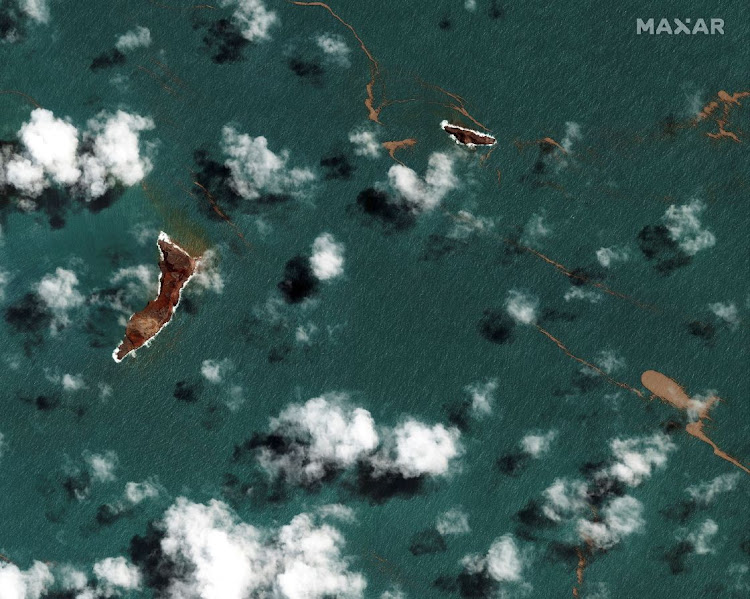 A satellite image shows the Hunga Tonga-Hunga Ha’apai volcano after its main eruption in Hunga-Tonga-Hunga-Ha’apai, Tonga, in this photo taken on January 18 2022. Picture: MAXAR TECHNOLOGIES/HANDOUT VIA REUTERS

Wellington/Sydney — The South Pacific archipelago of Tonga could be cut off from the rest of world for weeks because of difficulties in repairing its only undersea communications cable, which an operator said was ruptured during a huge volcanic eruption.

The challenge underlines the vulnerability of undersea fibre-optic cables, which have become the backbone of global communications, thanks to a capacity to carry about 200 times the amount of data than satellites.

Saturday’s explosion of the underwater Hunga Tonga-Hunga Ha’apai volcano sent tsunami waves across the Pacific Ocean, cutting the line that is  operated by Tonga Cable Ltd, about 37km offshore.

The repair of Tonga’s critical 827km fibre-optic link to Fiji depends on the arrival of a specialised ship still days away in Port Moresby, the capital of Papua New Guinea.

“Typically, all things going well, it would take around two weeks,” said Craige Sloots, marketing and sales director at Southern Cross Cable Network, which connects to the Tonga cable at Fiji.

That covers the eight or nine days the Reliance, the specialist cable repair ship in Port Moresby, will take to reach the affected area, while the crew also needs safety clearance for the repairs, he added.

“Its ability to repair would also be dependent, as you would expect, on any volcanic activity,” said Sloots, who is based in Sydney, Australia.

The Reliance, owned by US firm SubCom, a builder of underwater cable networks that is the repair contractor for more than 50,000km of cable in the South Pacific, has completed five-yearly maintenance in Singapore. It is in Port Moresby en route to its base in New Caledonia.

SubCom, owned by US private equity firm Cerberus Capital Management, said it was working with Tonga Cable to mobilise the Reliance for the cable repairs, while it evaluated crew and ship safety.

Fixing a break in a fibre-optic cable on land is easy for an experienced technician, but repairing a cut in one on a seabed is far more complicated. Cable operators must first locate the fault by seeing how far a pulse of light travels down the cable before it bounces back at the break.

Then a repair ship heads to the site of the break, where it sends down a submersible or deep water hook to grab the cable and pull it up to make the repair.

More than 99% of global international data traffic is still carried on a network of about 280 submarine cables stretching more than 1-million km.

In 2019, Tonga spent more than a week off the web, when the undersea cable was damaged in shallow waters, reportedly by a ship’s anchor. After that outage, it signed a 15-year deal for satellite connectivity.

But prohibitive costs limit the use of satellites across the archipelago for most people apart from government, officials and some businesses.

The use of satellite phones has also been affected by the ash still blanketing the country after the eruption.

Digicel, an international mobile network provider, said it had set up an interim system on the main island of Tongatapu using the University of the South Pacific’s satellite dish, which could allow limited 2G coverage.

“We just wait and pray and hope that communications come back soon because we don’t know anything,” said Pauline Lavulo, whose husband Aqulia is a pastor to the Tongan community in Sydney.

“Every Tongan ... wherever we are in the globe, we still have family back home.”

Explosion destroyed its sea-level crater and drowned its mass, obscuring it from satellites
World
3 months ago