Heavy rain, prolonged drought and harsher winters have thrown off flowering seasons and destroyed blossoms across Nepal over the past decade, decimating the country’s honey supply 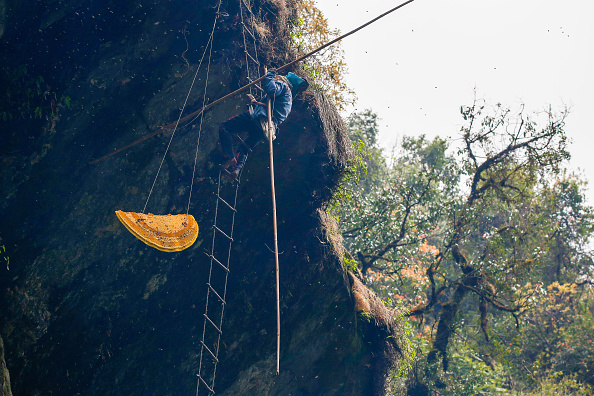 A hunter seen harvesting honey from the cliffs, hanging on the rope ladder in Nepal. Picture: GETTY IMAGES/SOPA IMAGES/SUNIL PRADHAN

Dang, Nepal — In the 15 years Chitra Bhan Khatri has been keeping bees in west Nepal, he never had trouble providing food for his insects — until 2021, when unseasonally heavy rain left his honeybees hungry.

Five days of torrential rainfall in Dang district in October sent temperatures plummeting, killing the bright yellow blooms of the mustard plants Khatri grows to provide nectar and pollen for his 300 colonies of European honeybees.

Then, when he took his bees to graze on nectar from chiuri (butter) trees in a nearby forest, the rain had knocked all the flowers off their branches, he said.

As he walked through his apiary inspecting his hives with their empty honeycombs, the beekeeper said he used to extract more than 40kg of honey per hive each year. But in 2021, his insects produced less than half of that.

Previously, Khatri had always been able to move his hives to another part of the region to feed — but last year there was almost no pollen or nectar to be found anywhere.

Heavy rain, prolonged drought and harsher winters have thrown off flowering seasons and destroyed blossoms across Nepal over the past decade, decimating the country’s honey supply.

In 2020, Nepal’s beekeepers produced about 50% less honey than three years earlier — and the warming climate is a big reason for the drop, said Shiva Prasad Sharma, a beekeeper and president of the Federation of Nepal Beekeepers (FNBK).

National honey yield data for 2021 is not yet available, but Sharma predicted it would be even worse than the year before, blaming an exceptionally wet, lengthy monsoon season for crushing what had been a blossoming industry.

“My beekeeping was growing. I was earning well by selling honey and expected 2021 would have been even better, but the heavy rain in monsoon [season] and October ruined all my dreams,” he said.

According to data from the Department of Hydrology and Meteorology, the 2021 monsoon season — from June to September — saw 15% more rain than average, and in October, parts of the country were drenched with five times more rain than usual.

“Honeybees are very sensitive and susceptible to both high and low temperatures, they die pretty easily — so, extra care is required in the changing climate,” said Sundar Tiwari, an entomology professor at the Agriculture and Forestry University (AFU) in Chitwan.

Bees are vital to the global food chain, but their numbers have been falling sharply, largely due to climate change, large-scale agriculture and pesticide use.

Beekeepers in Nepal say unusual weather patterns are leading to increased incidents of colony collapse, with entire swarms dying or leaving their hives to escape the heavy rains, freezing temperatures and dry spells.

Dileshwor Gurung, a beekeeper from Lamjung district in central Nepal, said the spring of 2019 was so hot and dry that thousands of bees in his 53 hives died.

“I tried hard to protect them by covering the hives with soaked jute sacks and straw, but to no avail,” recalled Gurung, who creates nucleus colonies from larger bee colonies to sell to other aspiring beekeepers.

“Bees are my lifeline. Their deaths caused me big trouble because I could not create as many new colonies as I wanted to,” he said.

His business was stung again in May 2021, when bees abandoned a quarter of his hives to seek food as Nepal experienced significantly higher-than-average rainfall after six months of drought.

Chitwan beekeeper Ram Prasad Poudel said the long dry spells have attracted mites, which have infested his hives, while he has also seen more fungal disease on his mustard plants.

As a result, he has been using more pesticides and herbicides — another potential threat to his insects.

A prolonged wet season also makes it difficult for bees to fly, stopping them from pollinating local flowers and plants, which eventually means fewer sources of nectar.

“Unfavourable climate, pesticides, and pests — all pile up the pressure on us,” Poudel said.

Beekeepers all over Nepal are worried about their livelihoods, said Laxmi Kharel, senior plant protection officer at the government's Apiculture Development Centre, which represents the beekeeping industry.

“This year, I have received many complaints from beekeepers across the country that they have suffered a high rate of bee deaths,” he added.

To try to shield the industry against dropping yields, the federal government in 2015 introduced an insurance scheme that covers the loss of honeybees due to weather disasters such as flooding and drought as well as pesticides and accident.

The government pays up to 80% of the premium, and the payouts cover 90% of the value of any honey shortfall.

But few beekeepers are insuring their colonies, mainly because they are unaware of the programme and its benefits, said Nirmal Adhikari, deputy director of the Insurance Board.

Data from the FNBK shows there are currently more than 11,000 beekeepers in Nepal. Of those, only 215 were insured as of July 2021, according to the Insurance Board's figures.

“Agriculture divisions at the local government units and the Insurance Board must carry out a countrywide campaign to make beekeepers aware about its benefits,” he said.

But insurance alone will not be enough to keep the industry buzzing as scientists warn the effects of climate change will only become more intense and unpredictable, said Khem Raj Neupane, a horticulture professor at the AFU.

Beekeepers and the government should focus on boosting plant biodiversity and encouraging beekeepers and farmers — whose fields also provide food for honeybees — to grow plants that bloom at different times of the year so bees can eat year-round.

They also need to be persuaded to plant more perennial plants and reduce their use of pesticides.

“Insurance helps, but to keep the honey industry vibrant, now is the time to keep colonies safe, healthy and strong,” Neupane said.