Ampoule fuel system will obviate the need for infield fuelling 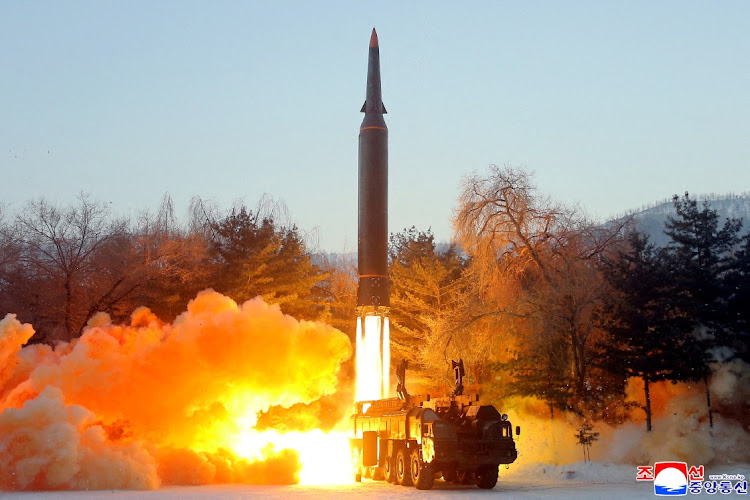 A view of what state news agency KCNA reports is the test firing of a hypersonic missile at an undisclosed location in North Korea on January 5 2022. Picture: KCNA via REUTERS

Seoul — North Korea’s recent claims of testing hypersonic weapons overshadowed its pursuit of a potentially risky rocket fuel system that analysts say could allow the nuclear-armed state to deploy and launch its missiles faster during a war.

Most of the country’s largest ballistic missiles use liquid fuel, which typically requires them to be loaded with propellant at their launch site before they can be fired — a time-consuming step that makes them easier to spot and destroy.

Pyongyang has also pursued solid-fuel technology, but so far most of those engines have been used on smaller, short-range missiles.

Recent tests suggest North Korean military scientists are pursuing a third option: a “missile fuel ampoule” system to seal the liquid propellant and oxidiser tanks within the missile’s airframe, allowing them to be fuelled at the factory and ready to use.

“This would obviate the need for infield fuelling, which could increase the responsiveness of North Korean liquid propellant missiles,” said Ankit Panda, a fellow at the US-based Carnegie Endowment for International Peace. “They are still quite a ways off from switching to an all-solid force so this could be a useful interim pursuit.”

North Korea said it first used such ampoules in September, when it claimed to have tested its first hypersonic missile, capable of carrying a warhead that can glide at more than five times the speed of sound.

At the time, state media quoted a top official discussing the significance of “turning all missile fuel systems into ampoules”.

That suggests North Korea “intends to continue to retain and improve its liquid-propellant ballistic missile force for the long term rather than shift to an all-solid force,” said 38 North, a Washington-based organisation that monitors North Korea.

The same type of rocket booster with an ampoule system may have been used last week in a second hypersonic test. North Korea launched another missile on Tuesday, but technical details on the type of rocket involved were not immediately available.

The volatility of the fuel-storage system the North Koreans are pursuing casts doubt on its military usefulness, said Markus Schiller, a missile expert based in Europe.

Those rocket engines use nitrogen tetroxide (NTO) as an oxidiser and unsymmetrical dimethylhydrazine (UDMH) as fuel. Both are toxic as well as “hypergolic”, which means they react violently when in contact with each other. That explosion is channelled through a nozzle to power the rocket. But the chemicals can be vulnerable to shocks and temperature.

“You are driving around with a bomb,” Schiller said. “The moment the missile tanks rupture because you hit a pothole, or because someone shoots at the missile, all will be gone in a thick red cloud.”

“If you are sitting in the woods on a Korean winter night waiting for launch command, the NTO will freeze in your pipes, and start freezing in your tanks. Your missile will blow up at launch,” Schiller said. “Also, you don’t want to risk launching a missile on hot summer days, with the oxidiser boiling in the tank.”

North Korea said the Wednesday test verified the “reliability of fuel ampoule system under the winter weather conditions”, suggesting it is seeking to ensure the stability of such systems.

Unlike most other countries that have used such a system, North Korea does not appear to be using canisters to protect and insulate the missiles.

“This seems to confirm that ‘ampoulisation’ is not canisterisation but akin to the Soviet/Russian practice of preloading submarine-launched ballistic missiles with propellants at the factory and maintaining the fuelled missile as a sealed unit for loading into the launcher,” 38 North concluded in a report.

The report said that developing more stable propellants would allow missiles to remain fuelled on a day-to-day basis.