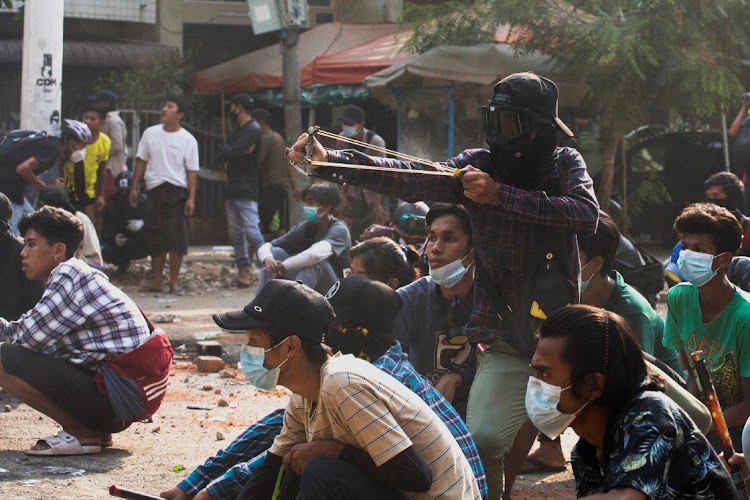 A man uses a slingshot during a protest against the military coup in Yangon, Myanmar, in this March 28 2021 file photo. Picture: REUTERS

Myanmar’s military must halt attacks on the town of Loikaw and lift a blockade on those trying to flee, a UN human rights investigator said on Monday, as a shaken resident described constant shelling and air strikes in the area.

Loikaw is the capital of eastern Myanmar’s Kayah State, which borders Thailand that has often seen intense fighting between the army and rebel groups opposed to last year’s coup.

Since last week, the military had launched air strikes and fired artillery in the town, forcing several thousand residents to flee, according to a resident and media reports.

In a message on Twitter, Thomas Andrews, UN special rapporteur on human rights in Myanmar, said military ruler Min Aung Hlaing “must immediately halt the air and ground attacks that junta forces have unleashed on Loikaw”.

A blockade preventing people fleeing from the area should also be lifted and humanitarian aid let in, he said.

A spokesperson for the military junta did not answer calls seeking comment.

A resident in Loikaw said fighting on the outskirts of the town meant it was very difficult to flee.

“I have just prepared mentally that I might die,” said the resident, who asked not to be identified for security reasons.

The resident said some people with vehicles or motorbikes had managed to get out, but many others including the elderly or sick had not been able to leave.

A staff member at Shwe Loikaw, an aid group in the area, estimated two thirds of the population were trying to flee.

The Myanmar Now news portal at the weekend cited rebel groups as saying four civilians had been killed in the town.

In a statement, the Karenni National Defence Force (KNDF), one of the main opposition forces in the area, said its members had shot down an army helicopter and killed about 30 soldiers in Loikaw. It later said another eight troops had been killed in nearby Demoso town.

Reuters could not independently confirm the claims.

Myanmar has been in turmoil since the military overthrew the elected government of Nobel prize laureate Aung San Suu Kyi last February, sparking months of protests and a bloody crackdown.

Since the coup, more than 1,400 people have been killed and more than 11,000 arrested in efforts by the security forces to stifle protests, according to a tally by the Association for Assistance of Political Prisoners rights group.

No group has issued a reliable estimate of the number of people killed in fighting between insurgent groups and the military.