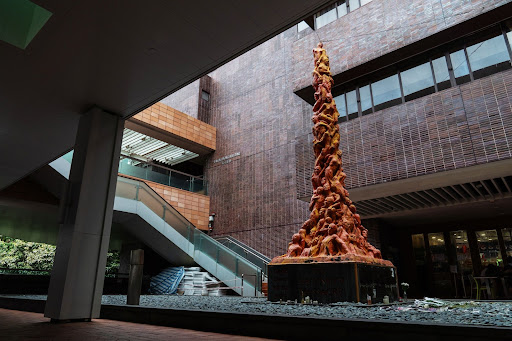 ‘Pillar of Shame’, the sculpture commemorating the 1989 Tiananmen Square crackdown, was removed from the campus of the University of Hong Kong. Picture: BLOOMBERG

The artist whose sculpture commemorating the 1989 Tiananmen Square crackdown was removed in Hong Kong says he’s dropped the copyright so others can freely replicate and distribute the artwork.

Jens Galschiot said in an interview with Danish radio that he’s received more than 40 inquiries from other artists and from demonstrators who want to create their own versions of the two-tonne Pillar of Shame to support the democracy movement in Hong Kong.

Normally artists don’t give their art away for free, but Galschiot said he’s decided to do so because it’s “important” that people see the artwork. The sculpture “is a reminder of the massacre at Tiananmen Square, of the democracy movement and of human rights”, the Danish artist said.

Before its removal in December, the 8m-tall structure had been on the campus of the University of Hong Kong for 24 years. Authorities said it posed legal and safety risks, though its removal came as the government moved to enforce strict new limits on free speech in the former British colony, including filing charges against dozens of prominent activists.

Officials identified 201 of 207 patrons of a restaurant where an airline crew member, who was subsequently found to be infected with Omicron, was ...
News
1 week ago

‘The trigger point was the fate of Stand News,’ said Chris Yeung, the chief writer at Citizen News
World
1 week ago

No instructions were given, but clerics see it as Beijing’s strongest bid yet to influence the postcolonial church
World
2 weeks ago
Next Article