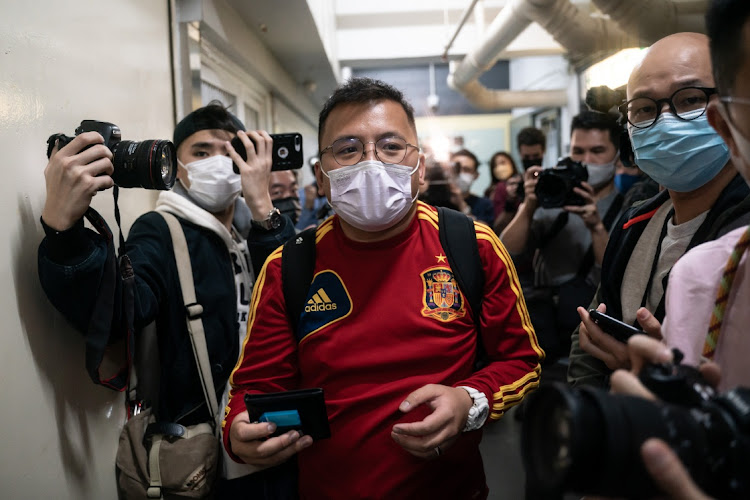 About 200 officers raided the office of the online publication on Wednesday, froze its assets and arrested seven current and former senior editors and former board members, in the latest crackdown on the city’s press.

Media advocacy groups and some Western governments criticised the raid and arrests as a sign of further erosion of press freedoms since China imposed a sweeping national security law in the former British colony last year.

Along with Best Pencil , the corporate entity behind Stand News, the two men were charged with conspiring “to publish and/or reproduce seditious publications,” according to the charge sheet.

Ng told reporters as she left the police station that, “continuing to care for each other is very important”.

Chung’s wife, Chan Pui-man, formerly a senior editor with the pro-democracy Apple Daily newspaper was already being held on different charges in prison where she remains.

Reuters could not reach Best Pencil, nor any of the seven arrested on Wednesday, which included Chung’s wife, who was rearrested in jail, or their legal representatives for comment.

It was not immediately clear if Chow had been released on bail. The police gave no immediate comment to Reuters questions on Chow's status.

Hong Kong returned to Chinese rule in 1997 with the promise that wide-ranging individual rights, including a free press, would be protected.

But pro-democracy activists and rights groups say freedoms have been eroded, in particular since China imposed the new national security law after months of at times violent pro-democracy protests.

US Secretary of State Antony Blinken described the arrests as unjust and called on Hong Kong and Chinese authorities to “cease targeting Hong Kong’s free and independent media,” saying it undermined the financial hub’s credibility.

Hong Kong’s government denies targeting the media and curbing its freedoms and its leader, Carrie Lam, said the action against Stand News was aimed at seditious activity not the suppression of the media.

“These actions have nothing to do with so-called suppression of press freedom,” Lam told reporters.

“Journalism is not seditious ... but seditious activities could not be condoned under the guise of news reporting.”

Set up in 2014 as a non-profit organisation, Stand News was the most prominent remaining independent pro-democracy publication in Hong Kong after a national security investigation this year led to the closure of jailed tycoon Jimmy Lai’s Apple Daily newspaper.

Stand News shut down hours after the raid and all of its employees were dismissed. Its website was not accessible on Thursday and its London bureau chief, Yeung Tin-shui, said on Facebook his office had also closed.

Beijing’s main representative liaison office in Hong Kong, said Stand News was an “out-and-out political organisation” that “kept publishing articles that incited others to use violence and even split the country”.

The Chinese foreign ministry’s Hong Kong office said support for press freedom was being used as an excuse to disrupt stability in the city.

“Those who engage in activities that endanger national security ... under the cover of journalism are the black sheep tarnishing the press freedom and will be held accountable,” it said in a statement.

Media outlet is now stopping operations, acting editor in chief Patrick Lam has resigned and all employees are dismissed, it said in a Facebook post
World
4 weeks ago

No instructions were given, but clerics see it as Beijing’s strongest bid yet to influence the postcolonial church
World
4 weeks ago
Next Article