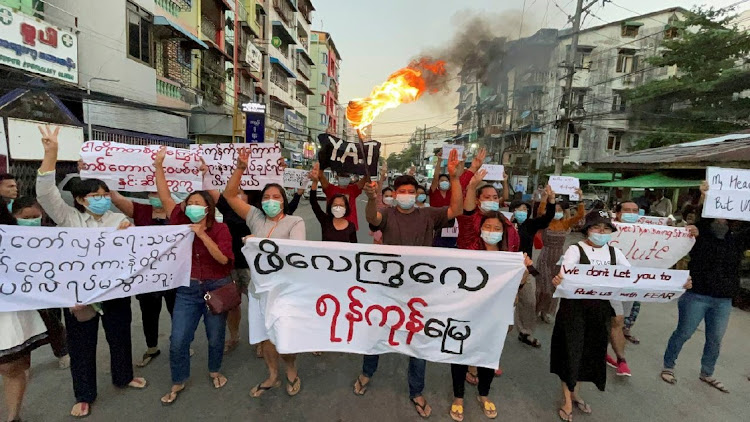 Myanmar soldiers have been accused of rounding up 11 people in a village in a central area of the strife-torn country before shooting them and setting fire to their bodies, according to residents in the area and media reports.

The charred remains were found in a village in Sagaing, an area which has seen fierce fighting between security forces and militia set up by opponents of military rule since a February 1 coup, according to residents, who said some of the victims were still alive when set alight.

Video footage purporting to show the burnt bodies was circulated on social media and images were published by some media including the Myanmar Now news portal.

Reuters could not independently verify the authenticity of the footage or claims over how the 11 died and a spokesperson for the junta did not answer calls seeking comment.

A volunteer aid worker in the area, who asked not to be identified, said by telephone that troops had entered Don Taw village early on Tuesday and the victims were killed at about 11am that day.

“The troops were just brutally killing anyone they could find,” the volunteer said, citing witness accounts. The volunteer has assisted people who have fled Don Taw and other nearby villages.

The volunteer said it was unclear if the victims were militia members or ordinary civilians.

Myanmar has been in chaos since the military overthrew Aung San Suu Kyi's democratically elected government, with widespread protests and the formation of militia, known as People’s Defence Forces, to take on the well-equipped army.

Kyaw Wunna, a member of the People’s Defence Forces in the region, said by telephone he was told that troops had arrived firing weapons and those detained were taken to a field near the village before being killed.

Kyaw Wunna declined to disclose the source of the information.

Another volunteer aid worker said they had spoken to witnesses among some of the 3,000 people who had fled from five villages in the area and had gone into hiding, fearful of more arrests and killings. A relative of one of the victims said the dead man, Htet Ko, was a 22-year-old university student and not a member of any militia and not armed.

“This is inhumane. I feel deep pain in my heart,” said the relative, who said the man had tried to flee, but had been wounded by gunfire.

Dr Sasa, a spokesperson for Myanmar’s shadow civilian government set up following the coup, alleged the victims had been “lashed together, tortured and ultimately burnt alive”. In a post on social media, he listed the names of the 11, all male and including a boy of 14.

“These horrific attacks show that the military have no regard for the sanctity of human life,” he said.

The Assistance Association for Political Prisoners, a monitoring group cited by the UN, says more than 10,700 civilians have been detained and 1,300 killed by security forces since the military seized power.

The military says the association is biased and uses exaggerated data and that hundreds of soldiers have also been killed.