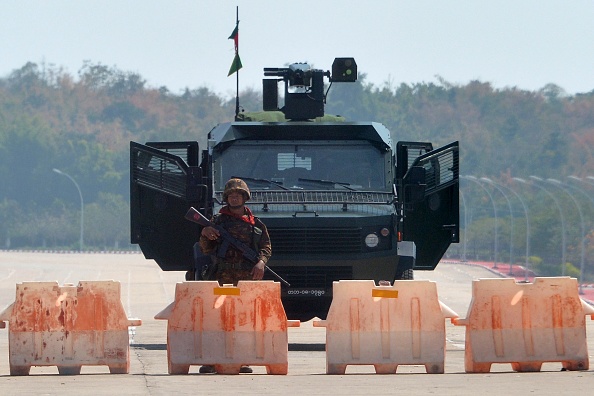 A soldier stands guard on a blockaded road to Myanmar's parliament in Naypyidaw on February 1 2021. Picture: GETTY IMAGES/STR/AFP

Myanmar’s ruling military threatened on Friday to arrest citizens who invested in bonds offered by a shadow government, warning of lengthy prison sentences for their involvement in what it called “terrorist” financing.

The National Unity Government (NUG), an alliance of pro-democracy groups, ethnic minority armies and remnants of the civilian government overthrown by the military, said this week it had raised $9.5m in the first 24 hours of its bonds sale.

The NUG says the proceeds from the zero-interest bonds will fund its “revolution” against the military in response to its February 1 coup and bloody suppression of protests. It has not said how the funds would be used.

Zaw Min Tun, the junta's spokesperson, said the NUG has been outlawed as a “terrorist organisation”, so those providing funding faced serious charges.

“Action can be taken under terrorism charges with heavy sentences for those financing the terrorist groups,” he told a regular televised news conference

“If you buy the money bonds, it falls under that [provision].”

Myanmar has been in turmoil since the coup, which led to strikes and protests and a severe military crackdown on activists. It also led to the formation in several regions of militia forces allied with the NUG, some backed by armed ethnic groups.

More than 1,200 civilians have been killed in protests and thousands detained since the coup, according to activists cited by the UN.

International pressure on the junta is intense.

The regional Association of Southeast Asian Nations blocked junta leader Min Aung Hlaing from a summit meeting in October over his failure to cease hostilities, allow humanitarian access and start dialogue, as agreed with the group.

US President Joe Biden, who addressed the summit, also rebuked the regime.

The NUG did not disclose how many buyers took part in the sale, which requires participants to transfer funds to an account in the Czech Republic.

American journalist Danny Fenster has been released from prison in Myanmar and has left the country, his employer said.
World
9 months ago

Danny Fenster, managing editor of online magazine Frontier Myanmar, is the first Western journalist to be jailed in recent years in Myanmar
World
9 months ago
Next Article