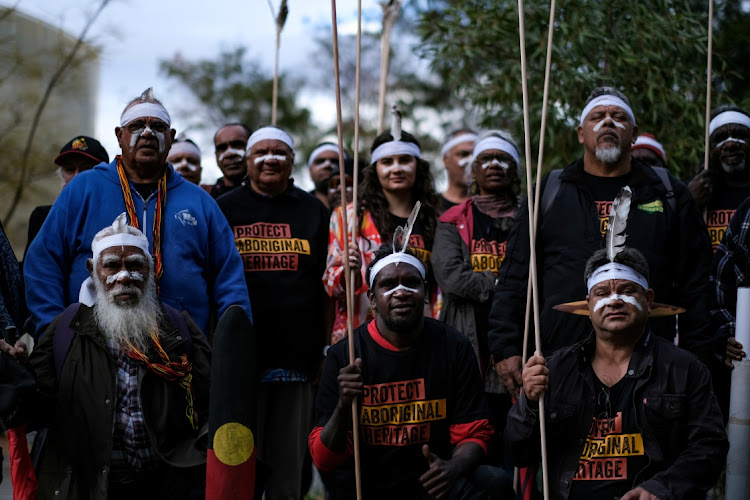 Aboriginal groups' members take part in a protest against what they say is a lack of detail and consultation on new heritage protection laws, after the Rio Tinto mining group destroyed ancient rock shelters for an iron ore mine last year in Perth, Australia August 19 2021. Picture: REUTERS/KIMBERLEY LAND COUNCIL/GABRIELLE TIMMINS

“Fundamentally, this bill will not protect Aboriginal cultural heritage and will continue a pattern of systematic structural racial discrimination against Aboriginal people.”

Western Australia produces more than half of the world’s traded iron ore, a key steelmaking ingredient and Australia’s most lucrative export, worth A$153bn in the year to end-June.

The new state legislation is at odds with the findings of a national inquiry into Rio’s destruction last year of rock shelters at Juukan Gorge that showed evidence of continual human habitation stretching back 46,000 years into the last Ice Age.

The inquiry urged a new national protection framework and said Aboriginal traditional owners should be the top decisionmakers on development applications that could impact their heritage and have the power to withhold consent.

The bill, which has been under revision for three years, was introduced to state parliament on Wednesday.

The state premier’s department said it will focus on reaching agreement with Aboriginal groups and on obtaining full, prior and informed consent for development.

Aboriginal groups, however, said they had not been adequately consulted and they did not gain a right of appeal to a ministerial decision, a cornerstone of modernising the laws. Miners and developers will also be unable to appeal any ministerial decision.

In the decade to July 2020, miners submitted more than 460 applications to impact Aboriginal heritage sites and all but one were approved.

“What we have been delivered is ... the minister making unchallenged decisions on whether cultural heritage may be destroyed,” Tony Bevan, acting CEO of the Wintawari Guruma Aboriginal Corp, said.

The bill also put many extra bureaucratic requirements on poorly resourced and financed Aboriginal groups that many would be unable to meet, he added.

The Chamber of Minerals and Energy, which represents miners including Rio, BHP Group and Fortescue Metals Group, noted “extensive consultation” with government ministers, and said it could work with the new laws.

“We acknowledge that our industry hasn’t always got things right, at times with deeply regrettable consequences,” chamber CEO Paul Everingham said, adding that it remains committed to “respond to the priorities of local indigenous people”.

The rock shelters that Rio destroyed at Juukan Gorge had contained remnants of a 4,000-year-old plaited hair belt that showed a genetic connection with the area’s traditional owners.

Amid a public uproar, three senior executives including then CEO Jean-Sébastien Jacques left the company and parliament launched a national inquiry into the incident.

The group says extended lockdowns in Australia affected trade, while load-shedding and civil unrest took their toll in SA
Companies
2 weeks ago